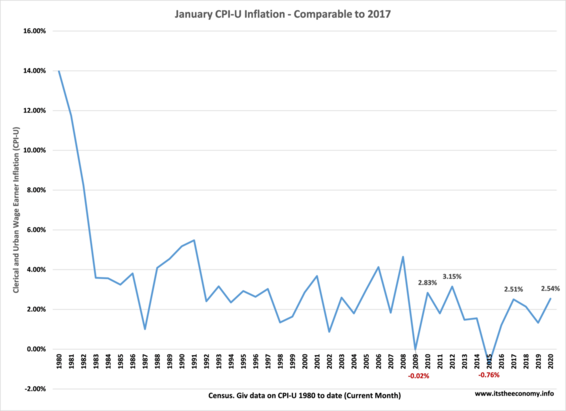 The January CPI Inflation Number came in a little higher than it has been.

This level is comparable to January 2017

There are some people who are paying attention to the headline CPI (Consumer Price Index) Inflation number. Most of he people who are commenting on inflation are those who are trying to downplay the recent increases in average hourly wages and average annual income. The non-seasonally adjusted CPI-U rate of inflation was recorded at 2.54%. This is the highest level since October 2018 when it was 2.69%. What else did the January 2020 CPI Report have to report?

The standard some inflation, some deflation data. We saw some commodities deflation in apparel, transportation, recreational commodities, and educational and communication commodities. We saw some food and energy inflation. The energy inflation is expected to be transitory as global demand for energy has declined due to the Cornavirus Crisis in China. Shelter Inlation remains relatively stable at 3.3%. The data that catches some attention is the "Health Insurance" inflation. It does not impact the overall inflation calculation because it is only weighted at 1.17% of the basket of goods.

Why are some in the media discussing the Misery Index? The Misery Index is a quirky, crazy combination of inflation and unemployment. The inflation often referenced is wage inflation. It can also be overall inflation. Imagine adding 2.54% of a pecan pie to 3.98% of a chocolate cream pie. You would have two pieces of pie on the plat, not 6.5% of a pie. The article "Trump will win a 2nd presidential term if this roughly 50-year-old gauge of the economy holds true" discusses this anomaly in detail. (Thanks to ArizonaKat on Twitter for the heads-up on the article.) It is also important to note that we had deflation during 2009 and 2015 that artificially lowered the Misery Index. (April 2015 low of 4.3%)

Gasoline prices have been dropping the past few weeks as the Coronavirus started impacting the news cycle. There are also fewer people working after the Christmas Holiday and the Scrooge Effect of January layoffs, This happens "every year." We should see hiring increase starting during February. The gasoline prices we are paying now will be reflected in the February CPI when it is expected that Energy inflation will be greatly reduced. It may bump higher as the Summer Blend of fuel starts being refined. This, too, is an annual event so the annual change should be negligible.

The inflation data was good. It was remarkable. We are still in the same pattern we have had for years. Shelter Inflation. Commodity deflation. Service Inflation. 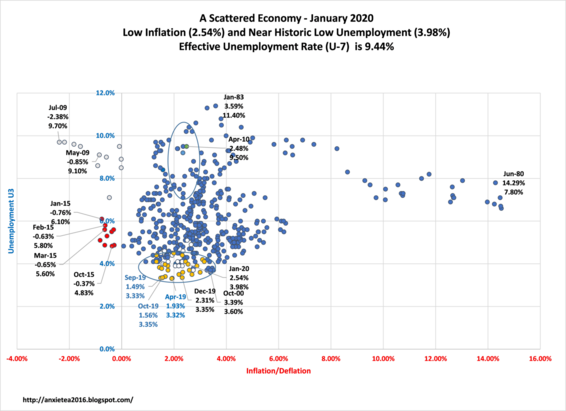 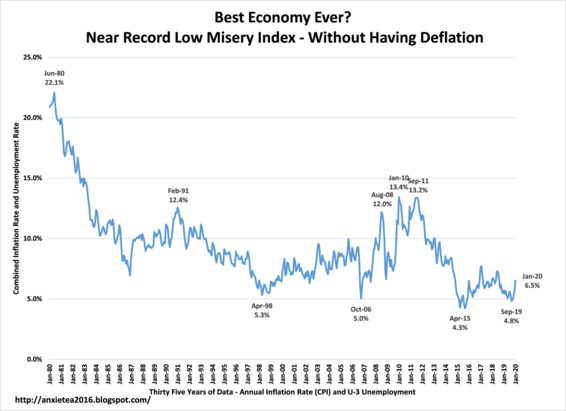