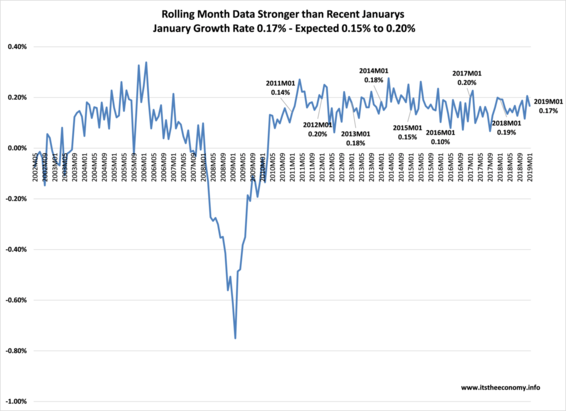 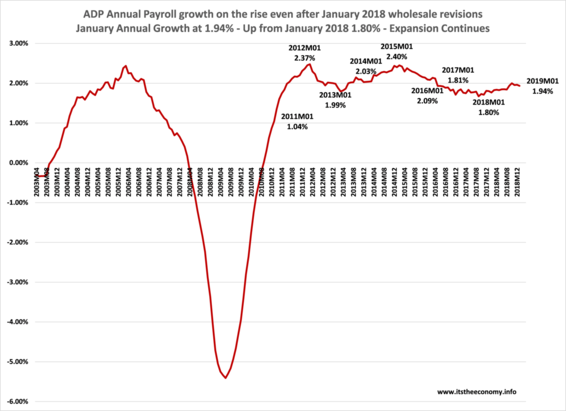 The ADP Private Sector Payroll data is thrown on the table before the Monthly Employment Situation report from the Government is released. There is head scratching when the two are not close. This month we know that the 2018 data from the government is being revised. We might see ADP follow suit next month.Some "experts" were anticipating only 173,000 payroll positions added in the ADP report. It was better than that. The Article "Jan. ADP Forecast: Expect Growth Except IT" was expecting much better than that.  What was reported?

The ADP Private Sector Annual Growth Rate came in substantially higher than January 2018.   The annual growth rate for October was 2.00%. The annual growth rate for November was 1.96%. The December growth rate was 1.99%. It is bouncing higher one month, lower the next. It was projected that we could see a rate of 1.96% to 1.99% and a seasonal adjusted payroll growth of 226,000 to 259,000 based on the annual growth. The 1.94% rate meant that 213,000 private sector payroll positions were added to the economy during January.

All Sectors Grew January to January.   The largest growth, by percentage, was expected to be in Construction, Natural Resources (M/L,) Manufacturing, Professional Business Services (PBS), and Education/Health Services (EHS.) This is important for the Employment Situation report as EHS and LAH are two of the largest sectors and two of the lowest paid sectors. The largest growth January to January were Mining and logging (Natural Resources) up 6.27%, Construction at 3.01%, PBS at 2.72% and LAH at 1.94%.