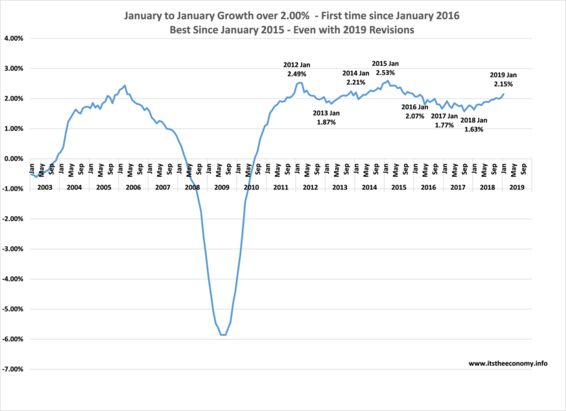 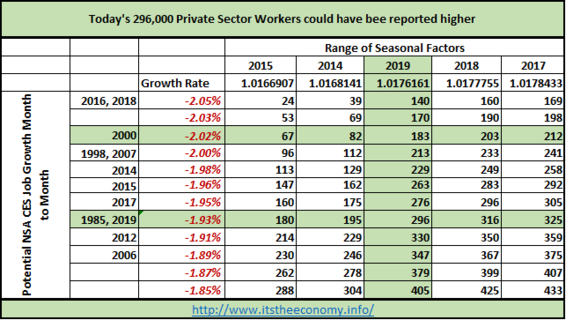 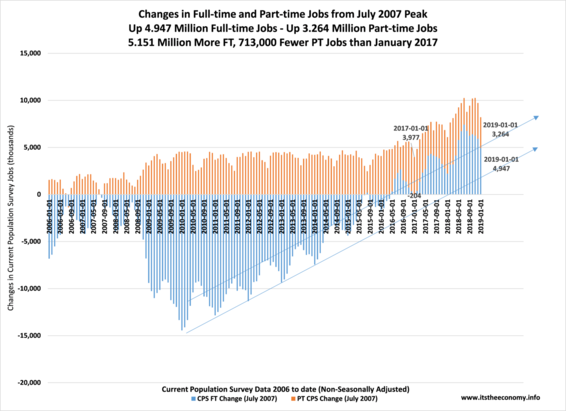 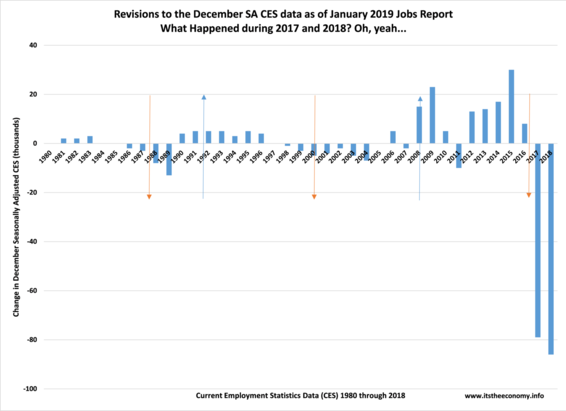 The Government Shutdown was supposed to show up in the January Jobs report because of the huge loss of government workers. This was supposed to place the jobs streak record in jeopardy. The problem is that the jobs streak that started under former President Obama was the "Private Sector" Jobs Streak. Government workers fall into the "Non-Farm Payroll Data" not the "Private Sector data.

The forecast was for non-seasonally adjusted full-time and part-time job losses to be seasonally adjusted to job gains. The Current Population Survey (CPS) data measures the workforce population, the number of full-time jobs, part-time jobs, and unemployed workers. Unemployment was expected to bump higher than it was during December 2018 and lower than it was during January 2017. It was expected to be under 7 million. The Government Shutdown was not expected to be observed in the data because the workers were still employed, just furloughed. The 880,000 furloughed workers were just a thin sliver of the total workforce. There were still 21.92 million other government workers and 128.3 million private sector workers.

The Headline  data was reported at 304,000 Non-Farm-Payroll Jobs Added and 296,000 Private Sector Workers Added to the Economy. This is in the land of up is down and down is up. The annual growth rate, non-seasonally adjusted, hit 2.15%. This is considerably higher than what was expected. The Seasonal factor came in between the value for 2014 and 2018, as expected. This means that if we had used the seasonal factor from last year the headline value would have been 316,000 Private Sector Workers. If we used the seasonal factor from 2017 then it would have been reported at 325,000 workers added.

Full-time Jobs and part-time jobs recorded an reported a drop. This is the difference between the CES Establishment data and the CPR Household data. Did we really have that many government workers say that they were out of work? The number of unemployed government workers was 567,000 versus 474,000 during January 2018. Not even the seasonally adjusted CPS data could turn either the FT or PT jobs positive.

Unemployment spiked over 7.0 million. It is still lower than it was during January 2017. There is a disconnect between the strong Continuing Claims data and the spike in unemployment. Unemployment jumped by 1.111 million workers. This was reported as an uptick of 241,000 Seasonally adjusted unemployed workers.

There are more articles to be written. The sector growth, wage growth and total earnings growth will be covered in the next article. There is also a comparison of Men and Women working full-time jobs and part-time jobs, as well as the number of multiple jobs that they both work. There will be an analysis of the workforce by age groups. .

Most economists consider the monthly jobs report to be a trailing indicator. It tells use where we were January 12th and today is February 1st. The jobs report can be considered a forward looking economic indicator. We have 5.151 million more full-time jobs than we had during January 2017. We have a record level of FT jobs for the month of January. If we were drifting into a recession then we would see a same month drop in workers or jobs.  We might even see part-time jobs replacing full-time jobs while maintaining the same number of jobs. The private sector data is growing faster than it has during the past three years. The revisions to the data mean that the economy was slowing through January 2018 instead of January 2017, prior to the January 2018 revisions. Revisions were expected. Revisions back to 1980, again, were not expected.  This was a solid jobs report.