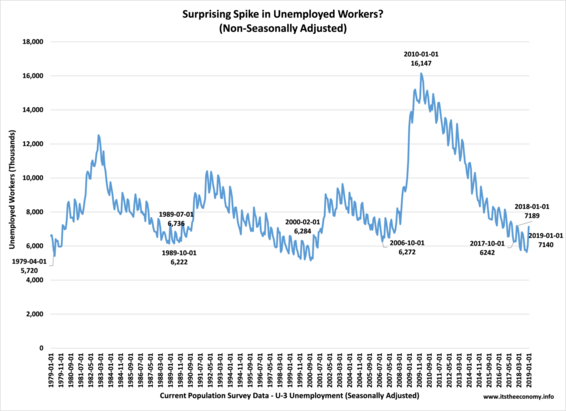 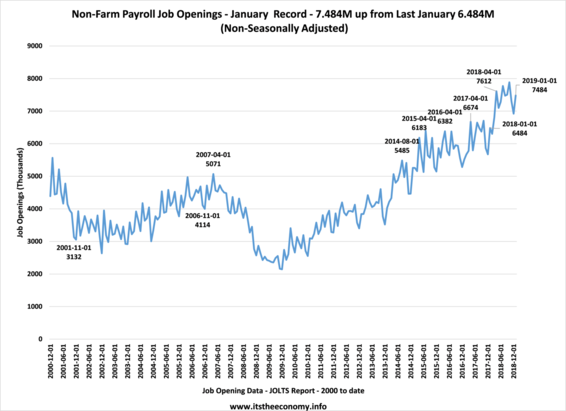 The net takeaway was that we were doing better this past January than virtually any other January. Even after substantial revisions to the Current Employment Statistics data we managed to add nearly 300,000 private sector workers, seasonally adjusted. It would be expected that the January JOLTS data may also be good.

The revisions were not isolated. They were widespread.

We set January Records for Job Openings and Quits. We had the second most January Hires ever. This is significant. We have 1 million more non-farm payroll job openings this January than we had last January. The question is where are those jobs openings? The most job openings, by sector, are in Educations and Health Services (EHS,) Trade, Transportation, and Utilities (TTU,) Professional Business Services (PBS,) and Leisure and Hospitality (L/H.) The most Job Openings are in the Southern Region, followed by the Midwest and West, and finally the North East.

We saw a similar pattern with the Quits data. The sectors with the highest levels of quits were PBS, TTU, L/H, and EHS.  The most quits were in the South, followed by the West, the Midwest, and the Northeast.

We saw a similar pattern with hiring. The sectors that did the most hiring  were PBS, TTU, L/H, and EHS. Hiring was strongest in the South, followed by the Midwest, the West, and the Northeast.

We also saw a similar pattern with the Total Separations data.  TTU had the most separations, followed by PBS, L/H, and EHS.  The most total separations were in the South, the Midwest, the West, and the Northeast.

We had 7.140 Million Unemployed and 7.484 Million Job Openings during January. Apples and Oranges. The Job Opening Data is comparable to, not identical to, the Current Employment Statistics (CES) worker data. The Unemployment Level, the U-3, comes from the Current population Survey (CPS) Jobs and unemployment data. The people who attempt to compare the U-3 unemployment level with the job openings data are misguided. All you have to do is look at the February CES data and the February CPS data and you will find that the non-seasonally adjusted CPS jobs level grew by 1.2 million total jobs and the headline seasonally adjusted CES data only grew by 20,000 workers.

This JOLTS data was good. It was record setting for the month of January. The data was massively revised.  There is a strong correlation between wages and job openings, wages and quits, and wages and hiring. You shouldn't compare apples, oranges, and pomegranates. 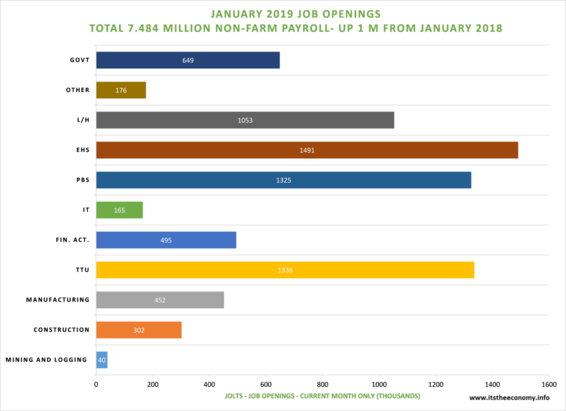 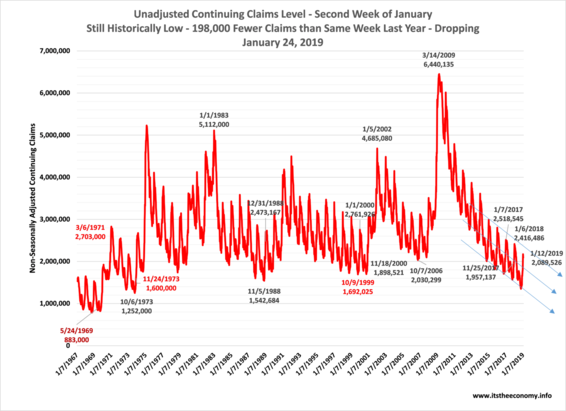