January Jobs Report - Best January Ever - For Men and For Women

So far there have been three articles written on the January Jobs Report:

The next part of the story is how men and women did during January.

Men and Women had Record January Jobs Months.  Men lost over 10 million full-time jobs at the worst of the recession during January 2010. They did not recover all of those lost jobs until July of 2016, before they lost them again. There were fewer men working full-time jobs during January 2017 than during July 2007. January is normally the low month for non-seasonally adjusted jobs The Full-time (FT) jobs datum was  even negative during January of 2018. Right now men have 667,000 more FT jobs and 1.592 million more Part-time (PT) jobs than they had during July 2007. The trend right now is for higher same month highs and higher same month lows.

Women had their best January ever. Women have seen the creation of 4.281 million FT jobs and 1.112 million PT jobs since July 2007. Their jobs recession was 3.820 million full-time jobs. They "fully recovered" by February 2015.  September, October, November, and December were  all-time records for combined full-time and part-time jobs for women. This month it was their best January.

There are fewer unemployed men and women now than during January 2007. This is slightly misleading. We also have a lower participation rate for both men and women than we had during January 2007. If you compare the male participation rate of 68.72% versus 72.93% the unemployment rate of men is not really 4.70%. There are over 5 million "missing participants." They are neither officially employed nor officially unemployed.

Missing not retired. This column also publishes a "Red, Gray, and Blue" article that shows that these missing workers are not who you think they are. Last month the article "Aging Workforce: December Records" reported that the workers over the age of 55 are "over-participating."

Women have fewer missing participants. The official, non-seasonally adjusted, unemployment rate for women was 4.08% this January. Their participation rate is only 2.05% lower than it was during January 2007. This still means that we have 2.7 million missing women participants and an effective unemployment rate of 7.40%

Multiple job workers were anticipated to drop from the levels recorded during December and be slightly elevated from January 2018. The multiple job worker numbers did dip from the December level of 8.030 million. The level of total multiple job holders edged slightly lower from last year's 7.751 million to 7.749 million. This is virtually unchanged. The past two January jobs periods were the second and third highest ever for the month of January. The number of PT PT workers dropped from 2.177 million during December to 1.879 million. This is lower than the January 2018 level of PT PT workers of 2.042 million.  It is the fewest dual PT workers recorded since January 2013.

A January Record for people working a primary FT and secondary PT job was set this month.We saw 4.452 million FT PT job workers this month, with 2.4 million men and 2.0 million women working FT PT. Is this the "gig economy" that we are seeing reported elsewhere?

The trend is higher for Multiple Job Workers.  We tend to have a mini-peak for MJH workers during February and March, a dip, and a resurgence during October, November and December.  Were people working multiple jobs because they could not find one good job? Will the trend be lower as more companies maintain full-time employees year-round? Will we see more FT PT workers and fewer PT PT workers?  There are fewer PT jobs now than when the President took office. There are 5 million more full-time jobs than when he took office. This will shift the FT PT, PT FT, and PT PT numbers. We might even see a surge in FT FT jobs this Summer.

The President Highlighted the successes of women in the New Economy in his State of the Union . He said:

"No one has (benefited) more from our thriving economy than women, who have filled 58 percent of the new jobs created in the last year. All Americans can be proud that we have more women in the workforce than ever before -- and exactly one century after the Congress passed the Constitutional amendment giving women the right to vote, we also have more women serving in the Congress than ever before.

As part of our commitment to improving opportunity for women everywhere, this Thursday we are launching the first ever Government-wide initiative focused on economic empowerment for women in developing countries." The text of the speech can be found here.

The Jobs Report was even better than what has been reported elsewhere. Every sector saw a pay raise compared to January 2018. All sectors had more workers this January than last January. More men and more women are working than any other January.The trend is upward. 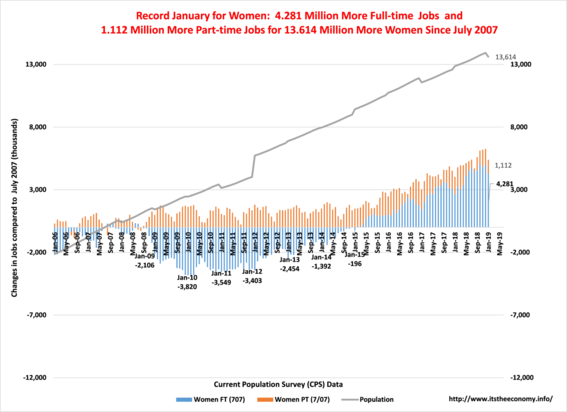 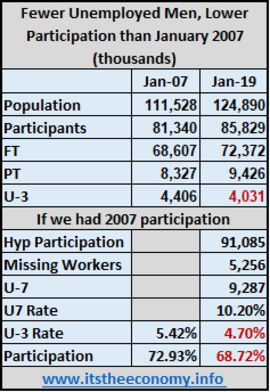 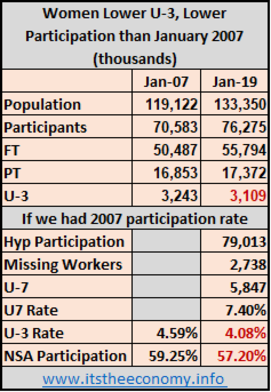 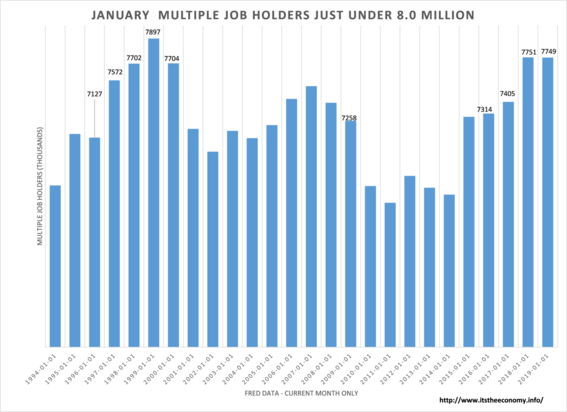 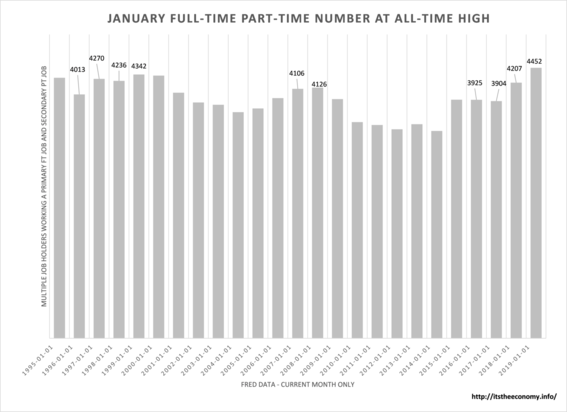 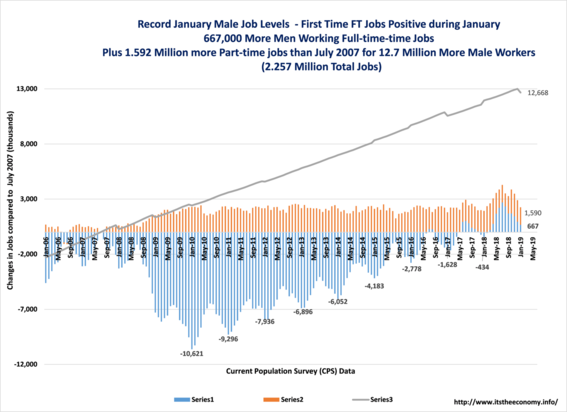