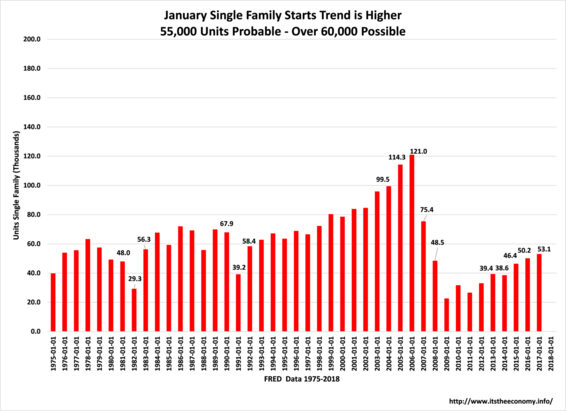 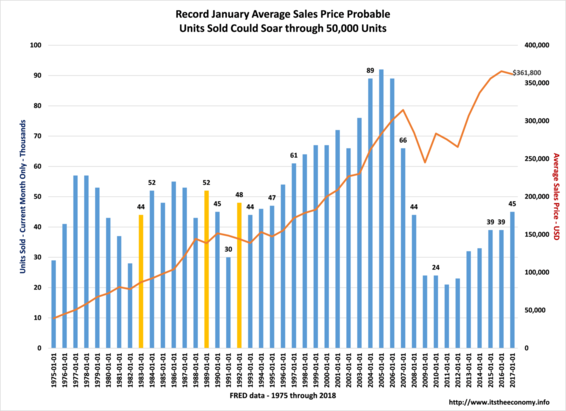 The Existing Home Sales Data has been struggling due to a lack of inventory.

The number of units sold during January had been languishing under 300,000 units until 300,00 until January 2016. We had been well above the 320,000 units during the month of January between 2002 and 2007. While it is possible for the number of units to fall between December and January, as well as between January and January, the the housing market has been improving. The Jobs market has been improving. The cost of rent has been steadily rising. Demand may be increasing for existing homes. The data indicates that 320,000 is definitely possible, 324,000 is probable, and that 329,000 units is a possibility. Expect a units sold number in the 320s.

The Average sales Price has been soaring since 2012. Expect it to continue. We saw a higher than normal December average sales price.  In fact, we saw a record December Average Sales Price. The average sales price could drop from the December level and still set a January record. Expect  number over $274,900 and under $284,9000.

How much of an impact will potentially record January inventory level have on the sales price and units sold? The inventory data fell below the 1.5 million units for the first time. This was lower than any December back to December December 1999, the farthest back the data is available.  Will December 2017 or January 2018 be the record low month? It is difficult to sell something that is not on the market. 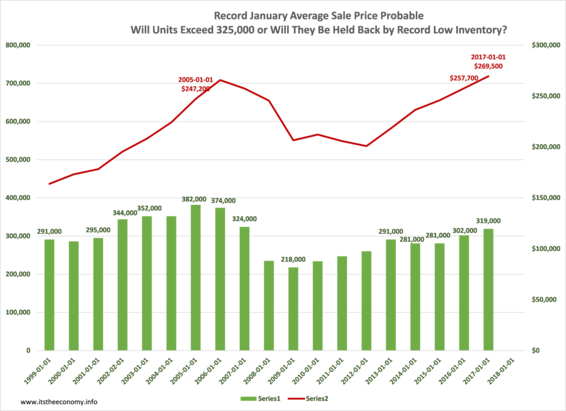 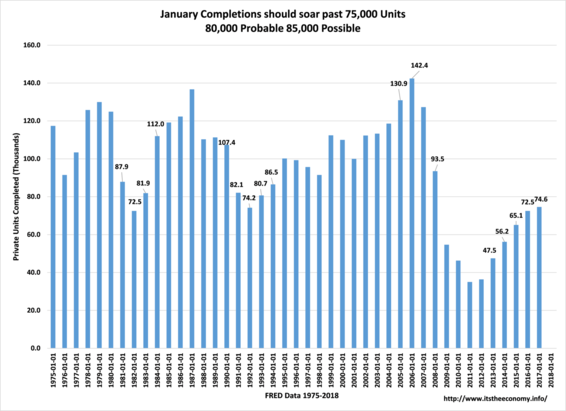 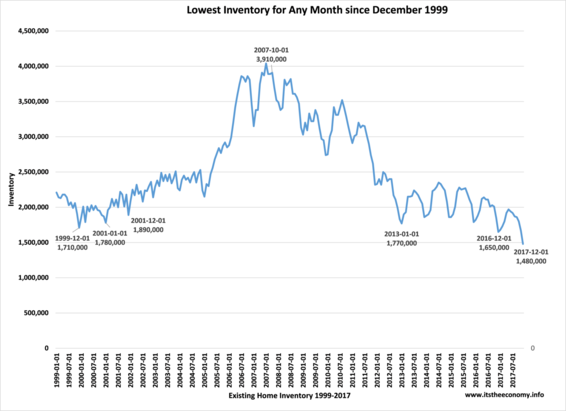 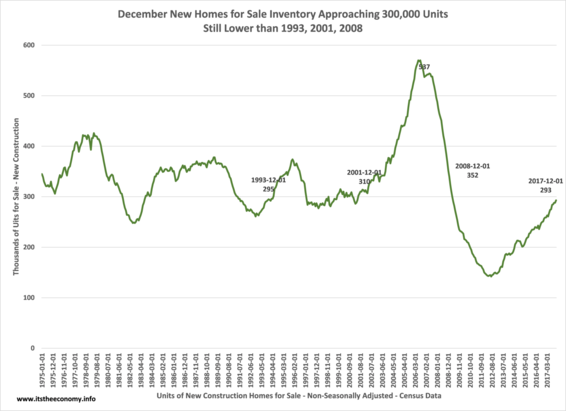 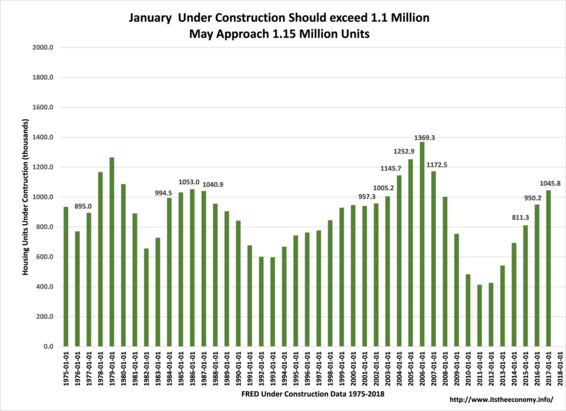 as long as there is enough inventory.

Expect a bump in Units Sold between January 2017 and January 2018. The New home Construction data indicates that we have been seeing steady improvement in the units sold since 2011. There was a sizable jump between January 2016 and January 2017. Even with that spike in sales we saw fewer home sales recorded during January 2017 than we saw during the month f January between 1992 and 2007. New home sales tend to decline between December and January as people who were "pressed" to close prior to the end of the year, builders or buyers, no longer feel that pressure.  The number of units sold can be flat or down month to month and January to January. We could see a slight down tick to 42,00 units sold. This would still be better than January 2015 and January 2016. Expect a number under 50,000 units and do not be surprised if it reaches 51,000 units or 52,000 units.

The Average Sales price could set a record for January. There was s light drop in the average sales price between January 2018 and January 2017. Even if there is a drop in the average sales price from December's December record then there could be another record set for January.  We should see a value between $379,000 and $389,000. While it is possible for a sizeable jump from December to January it is highly unlikely that the initial read will be over $422,000. Expect a record average sales price.  Expect a number over $370,000. Anticipate a number over $380,000. A value of $384,900 is would nor be surprising.

Will the New Home Inventory Exceed 300,000 Units? The inventory level for 2017 was almost the same at the end of 1992. It was also lower than 2001. The trend is higher, unlike the existing home market. It is also lower than it was during December 2008 as the market was in a serious recession. The inventory level  should continue t improve as under construction units are completed.

Watch for improvement in the units sold, the average sales price, and the inventory level.

The most reported report of any month is normally the Jobs Report. there is "always" a panel of people examining the report. Jobs are important to the economy. A similarly important report is actually a series of reports: The Real Estate Report. The first data points released will be released tomorrow with the New Construction data. The second part of this report is the existing home sales data.The existing home sales data will be released February 21st with the New Home Sales data following February 26th. Recently we have seen the number of units under construction return to nearly pre-recession levels. The Starts and completions data are still sluggish by historic standards, although they are the best that we have seen since 2007 or 2008, depending on the month. New home sales and existing home sales have been experiencing inventory shortages and record, or near record, average sales price levels.What should we expect for the January data?

Expect the Starts Data to exceed January 2017 Levels. The starts data has been gradually climbing for the month of January since 2011. The bottom of the starts valley was during 2009, a level that was even lower than January 1983.  While the starts level could drop December to January, January is normally a stronger month than December because things have to get "started" so that they can be completed before the end of the Summer.Expect a number over 55,000 units and less than 60,000 units.

Expect the Under Construction data to pop higher. It has been speculated for months that we could see a value of 1.2 million units under construction. We would need to see starts to pick up and completions to slow down for this to happen, or a combination of the two. A number greater than 1.1 million is expected for this month, possibly reaching 1.13 million or 1.15 million units, non-seasonally adjusted.

Expect the Completions data to be lower than December and Higher than January 2017. The starts curve, under construction curve, and completions curves have similar features.  It is highly unlikely that we will return to the January 2007 level of completions.  The growth data indicates that we should see between 77,000 and 84,000 units completed recorded during January.

This is important to not because without a growing level of units under construction inventory levels for new homes for sale will remain low. Lower inventory can mean higher prices. Lower inventory also creates a logjam for people who want to move out of an existing home into a new home.  This data is also important for the jobs data and the retail sales data. We may see an increase in the construction jobs data as more workers enter or re-enter the workforce. We could also see an increasing number of people entering or re-entering the financial services market. New homes also "require" new furniture and new appliances, as well as probably a trip to the Home and Garden Equipment stores.  Expect improvement from January 2017 levels of starts, under construction , and completions.