The jobs report data was released February 2nd. The data was greatly ignored. We saw massive revisions to the Current Employment Statistics data that muted the real gains between the advance December  data and the advance January data. The revision to the Current population Survey population data between December and January muted the improving participation rate.  President Trump is off to a good start as he has added the most full-time jobs during the first twelve months of his Presidency than President Reagan, Clinton, George W. Bush, or Obama did during their first twelve months in office. Sector by sector we are seeing rejuvenation. Women are winning the battle of the sexes for job creation since July 2007. Men still work more full-time jobs than women and women still work more part-time jobs than men. We saw a spike in the number of January workers working two part-time jobs. Our workforce is aging. That said, we are getting back to work. 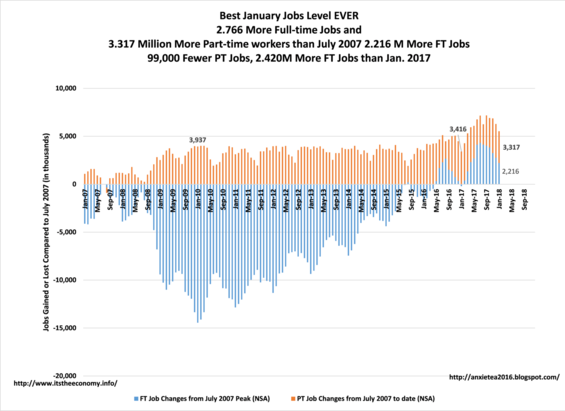 Unemployment is down for almost every age group since January 2017. The only age group that saw an uptick was that for those over the age of 75. It is important to note here that the composition of the unemployed workforce has changed from 2008 with more people over the age of 55 being unemployed. If age shift is taken into consideration, the situation where people who were 45-49 years of age during 2008 are now 55-59 years of age now, then these numbers have declined. This column has written numerous articles regarding how first-time claims data have been lower for the current week data than they were during the 1960s and 1970s with 90 million more eligible workers now than then. Unemployment has been skewed lower by elevated levels of part-time jobs and elevated levels of multiple job workers. Part-time jobs do not receive unemployment benefits. People who lose one job do not receive "lesser employed" benefits. As a rule, unemployment levels have dropped since 2010.

The Unemployment Rate Fell January to January for every age group. The level of unemployment for those 20-24 years of age remains over 8%. This is still better than before the Great Recession.  What receives very little attention is that the unemployment rate for those over the age of 70 has increased since the recession. There are older people working. There are older people who are not working who want to work and are looking for jobs.

The January Employment Situation Report, or Jobs Report, was released nearly three weeks ago.. There was a considerable amount of data to digest. The Current Employment Statistics (CES) worker data saw considerable revisions, mostly to the data from 2015 through 2017. These revisions created a surprise. The Current Population Survey data was unchanged for the same period of time. The surprise here was the dramatic upward revision to the workforce population value.  This upward revision negatively impacted the workforce participation number. So far four articles have been written:

The final way that this column examines the monthly data is the "Red, Gray, and Blue" data. This data is the employment, unemployment, and population changes by age group.

The Workforce Population has surged for those over the age of 60. This was one of the things that spurred the creation of this series. The workforce population has declined, in general, for those 45 years of age and older since the recession. The largest impact has been with those 45-49 years of age during 2008. We have also seen a serious decline in those who were 50-54 during January 2013.