The weekly unemployment claims report used to be headline news at the bottom of the eight o'clock hour during the Obama Administration. Would the seasonally adjusted (SA) first-time claims (FTU) level drop below 500,000 or 400,000 or 300,000? The current under 300,000 SA FTU streak began on March 17, 2015.  We have had two elections and two leap years in the meantime. They stopped mentioning the "streak" after the 2016 Presidential Election. They rarely acknowledge the continuing claims data. They have "never" commented on the Insured Unemployment Rate (IUR.) What was recorded this week?  And what were they expecting?

Non-Seasonally Adjusted First-time Claims were recorded at 250,892. This was a jump of more than 50,000 claims week to week from last week's revised level of 200,375. This column normally posts a tweet the evening before the report is released with an estimate. Last night I said I wasn't going to try. This morning, amid endless discussion on air and in the Twitterverse that we were going to see a monster jump in claims, this I posted a tweet saying that we might not see the full impact of the unemployment spike this week because people have to normally be unemployed for one full week before claims are available. (You also have to prove that you are looking for work.) I also posted a tweet that stated that the NSA FTU would normally drop 3-5% during the second week of March. That tweet mysteriously disappeared. This NSA FTU level is lower than it was on March 15, 2015 when the streak started.

The Seasonally Adjusted First-time Claims Streak has now been "reported" under 300,000 for the 262nd consecutive week? How is this possible?  We haven't seen the full impact of the state and federally mandated shutdowns. This Seasonally adjusted Claims number stopped being reported around week 98, after the 2016 election. People who were expecting a huge Wuhan Virus Spike have to realize that the data is collected on a Saturday. People apply for benefits the week after they are released. If they had two jobs and only lost one, then they are still employed. There is no "lesser employed" benefit other than having a second job. It is interesting to note that the seasonal factor for this week changed from what was published last week. It could have been reported at 277,000 instead of the headline 281,000 SA FTU claims. Oh, we also have fewer non-seasonally adjusted first-time claims, and fewer seasonally adjusted first-time claims, this second week of March than we had during the second week of March 2015 when the "seasonally adjusted FTU streak officially began."

The Non-Seasonally Adjusted Continuing Claims (CC) value was recorded at 1.976 million - down from last week's 2.057 million.  How is this possible? This is the data from the first week of March. The first-time claims data is from the second week of March. This data could decline for another week or tick up slightly next week. There are employers looking for stockers at grocery stores and truck drivers to make deliveries.

The seasonally adjusted continuing claims level is under the 2.0 million mark for the 152nd consecutive week.   This week the SA CC was virtually unchanged from last week's 1.699 million. This week we stand at 1.701 million claims. Will this data be reported when we hit the three year anniversary of this streak (April 1?) Will we make it? The comparisons with prior years are amazing when you consider the number of covered insured.  The Continuing claims data lags the First-time claims data, so it may be two to four  weeks before the continuing claims level really spikes. We also have the lowest ever Insured Unemployment Rate (IUR) for the first week of March. Ever

This data is so good that it "has" to be ignored. There were pundits talking about the three things that had to happen in order for President Obama to win re-election during 2012. First, the Seasonally Adjusted Weekly Claims level had to drop below 400,000 claims. We had 363,000 SA FTU (Oct. 27) and 361,000 claims (Nov. 3,) only to pop to 446,000 SA FTU claims on Nov. 10, 2016, Second, the SA Unemployment rate had to drop under 8.00%. Amazingly, the SA U-3 Unemployment rate dropped from  8.1% during August of 2012 to 7.8% during September of 2012. What wasn't being discussed back then was that the participation rate was dropping, too. The participation rate dropped from 64.0% during December 2011 to 63.6% during September 2016. The third thing that "had to happen" for former President Obama to be re-elected was to have gasoline drop below $3.00 a gallon.  This report was hyped as being bad while dismissing its relevance.

Right now all three ingredients are in place for President Trump to be re-elected. Seasonally adjusted First-time Unemployment Claims are under 300,000. Heck, they were almost under 200,000 claims a week ago. The unemployment rate is not only under 8%, it is under 7%, under 6%, under 5% and under 4%. Gasoline in Ohio is right around the $1.899 a gallon level. There is even a station nearby at $1.719 a gallon.

There have been numerous articles regarding the impending boom in first-time unemployment claims:

These were all written in anticipation of the surge recorded and reported this morning. A surge was expected. The thing is that there could have been headlines such as "Jobs Less Claims Remain under 300,000 in Face of Wuhan Virus"

Are the Unemployment claims data, plural, too good to be true? Are they too good to be reported?   Ignore the weekly claims data at your own risk.  Last year we had 23 weeks with non-seasonally adjusted first-time claims of fewer than 200,000 claims.  We almost had our second week this year this week. Last year we tied a record low IUR of 0.95%. Last year we had a low of 1.369 million continuing claims, comparable to the 1.350 million during October of 2018, with 2 million more covered insured.The earliest that we have had an NSA FTU recorded under 200,000 was February 24, 2018. Last year, during the month of April, we had two weeks with SA FTU under 200,000 claims,  What can we expect? Expect the Legacy Media to actively ignore the good news and focus on the Wuhan Virus as long as they can. They need their Black Swan. And they may have gotten their Black Swan. Fortunately, we have a Black Swan Hunter named Donald J. Trump as President. One weapon of choice may be Chloroquine. 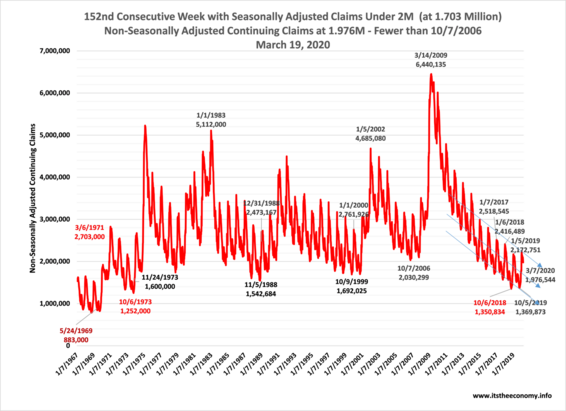 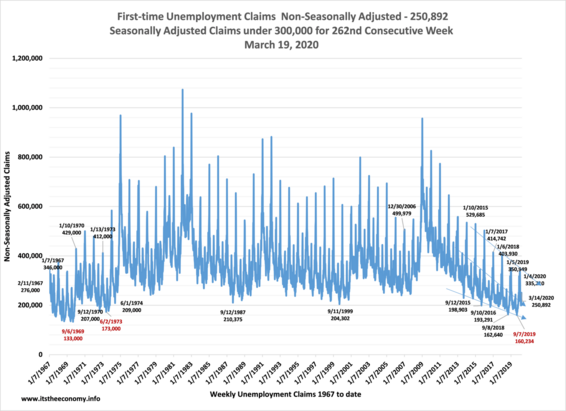