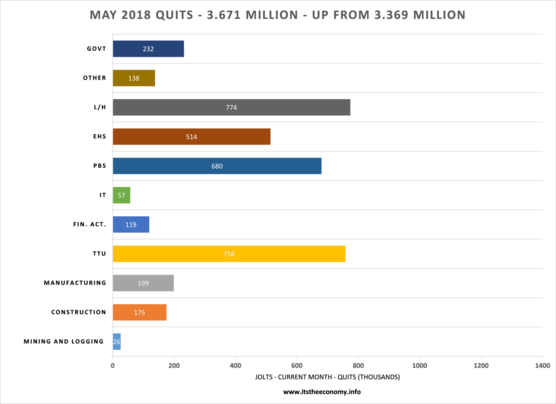 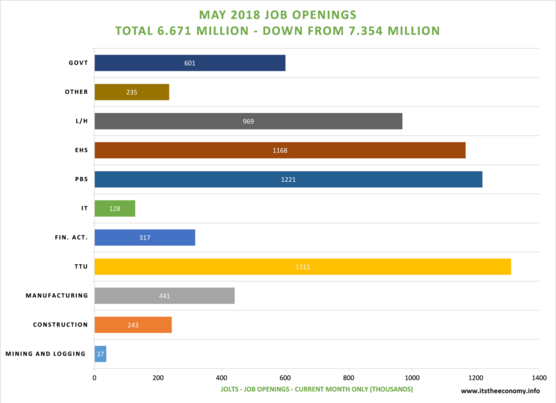 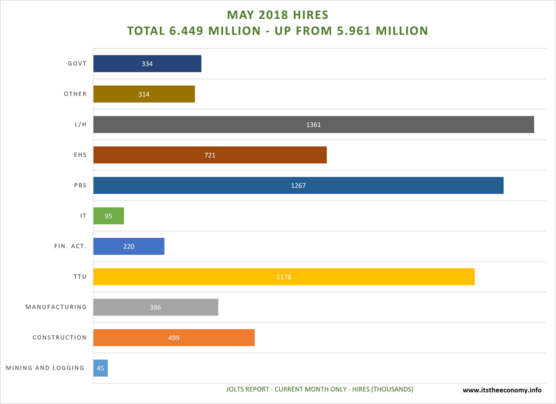 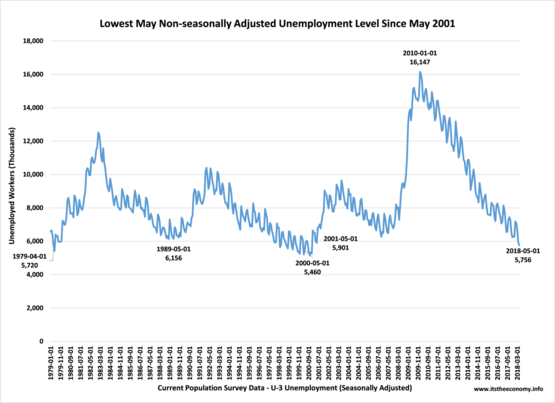 The problem is that the JOLTS Survey and the Jobs Report are created using different data sets. The JOLTS Survey is its own survey of 16,000 business establishments. The Jobs report uses two databases: The Current Employment Statistics (CES) Data, also known as the establishment data, and the Current Population Survey (CPS) data or the Household data. The CES data measures workers. The CPS data measures full-time jobs, part-time jobs, Unemployed workers, and the workforce population. The CES data samples 149,000 businesses. The CPS data is culled from surveys of 60,000 "eligible" homes. The current CPS U-3 unemployment number differs from the weekly continuing claims data. The CPS data is for those out of work, looking for work, at the time of the survey. The continuing claims data is for hose who lost work and were eligible for benefits.

The May Jobs Report, or Employment Situation report had a considerable amount of data that could be analyzed many different ways. This column produced the following articles:

Last month this column wrote an article on the "Negative Unemployment" situation titled "Job Openings Greater than Unemployed Workers So...." It detailed how these are different survey with different sample sizes measuring different things.It lo found a correlation with the Quits level and the wage level of those in Leisure and Hospitality (LAH,) Education and Health Services (EAH,) and the Trade, Transportation and Utility (TTU) sectors. It was proposed that people traded part-time jobs for full-time jobs, lower paying jobs for higher paying jobs, and that in order to fill positions employers were improving wages.

What was reported in the May JOLTS report?

Job Openings Fell from 7.354 million to 6.671 million job openings. TTU, PBS, EHS, and LAH had the largest number of Job Openings. Remember tan the TTU, EHS, and LAH sectors had three of the four lowest weekly wages during May.

Quits Jumped from 3.3 Million to 3.7 million during May. Once again the highest level of quits were in TTU, PBS, LAH, and EHS

Unemployment fell during May. It also spiked during June. There are more job openings than unemployed workers. Who cares? The job opening are being created through Quits and other separations. 5.7 million unemployed. 5.9 million Job Openings. One could argue that there are "only" 1.7 million unemployed workers, those who are receiving continuing unemployment benefits. Much lower levels of unemployment than there are Job opening. The "Missing Participants" during May exceeded 8 million workers, and may be as high as 15 million workers if we had the same participation rate as former President Clinton had during his second May in office. Which is it? Do we have an excess of job openings or a dearth of job openings? Two different surveys, three if you include the weekly claims data, three different results.

Hires were up half a million workers during May. It was reported as being up 270,000 workers (5.754 million versus 5.581 million during April.) Hires minus separations gives a number close to the workers hired during May. (May 5.468 m, April 5.424 million, Seasonally adjusted.) There were 286,000 SA net hires (Hires-separations) and there were 924,000 NSA Net Hires (Hires minus Separations)

We do not have negative unemployment. We do not have more job openings than unemployed workers. The workforce participation rate during May 2018 was lower than it was during May 1982. The workforce participation during 1982 was 63.89% while it was 62.83% this past May. That difference in participation, and the difference in population, means that we should have  2.7 million more participants right now, full-time jobs, part-time jobs, or unemployed workers.

We cannot expect President Trump to have a better participation rate after 16 months than President Reagan had after sixteen months in office because President Trump started with a lower participation rate gifted to him by former President Obama. We cannot expect hiring to exceed historical norms every month. WE need to pay attention to the different data sets and realize that there are samples of different sizes and measure different things. This was a solid JOLTS report. We just don't have a "negative unemployment rate" or a unemployed worker - Job Openings Gap. It is fake news.