This week began where last week ended, with the June Jobs Report. How did we do during June with regard to wages, sector improvement, men and women finding work, people working multiple jobs? How did Mom, Dad, Grama, Grampa, and the grandchildren do finding jobs?

(July 9) What is the real story regarding wages and workers? "June Wages, Worker, Earnings Up" detail how when more people are working, and more people are earning more money per week, that the total earnings grows . It's not rocket science: Wages x workers = earnings.

(July 10) A curious report that has received considerable attention is the monthly JOLTS (Job Opening and Labor Turnover Survey) report. This report measures Job Openings, hiring, quits, and separations. Unfortunately this survey is for May while the Jobs report that we received this month is for June. It is also unfortunate that many in the media are comparing job openings with the unemployment level. Two different surveys. Two different sample sizes. Two different numbers. It is like comparing a tomato with an orange. Add vodka and you have a party.  "JOLTing Jobs Opening Data" details how the highest quits and job opening levels are in the lowest wage sectors. Coincidence?

(July 11) There was a "War on Women" during the 2012 election, and to a lesser extent during the 2016 election. Ironically, women lost the fewer jobs during the Great Recession and recovered faster than men recovered. The recent surge in construction jobs, mining jobs, manufacturing jobs, and professional services jobs has helped boost wages. It also appears to help men add to their level of full-time and part-time jobs. "Men and Women working more full-time jobs" looked at the "Jobs Iceberg/Jobs Mountain" data and found that men and women have distinct differences. Men work more full-time jobs than women. Women work more part-time jobs than men. Men work more dual FT jobs than women. Women work more dual PT jobs than men. Men participate at a higher rate than women even though women make up more of the workforce population.

(July 11) It was projected in the June Jobs Forecast article that we should have seen a huge surge in FT jobs, a probable drop in PT jobs, and a spike in unemployment. It was thought that the spike in FT jobs, and the drop in PT jobs,  would lead to a drop in FT PT dual job workers and a drop in PT PT dual job workers. It turns out that Summer is Summer and people are working more dual jobs this month than last month. "Multiple Job Workers Edged Higher this June."

(July 12) The Jobs Openings data is different from the Unemployment (U-3) data which is different from the weekly Continuing Claims Data. We normally see a spike in non-seasonally adjusted (NSA) first-time claims during the first week of July and the First week of January after companies go through end of quarter lay-offs. "Unemployment Claims: Up is Down" details the importance of seasonal factors and comparing the current week data with the proper data from the proper week of prior years. There was a NSA spike in first-time claims (FTU) this week  that may translate into a bump in continuing claims (CC) next week. Total claims, FTU and CC will continue to head lower through the end of September and first week of October

(July 12) Oy. This is becoming a broken record. "June CPI: Commodity Deflation, Again" digs into the Consumer Price Index (CPI) data. We are experiencing Medical Services Inflation, services inflation, Shelter Inflation, Energy Inflation, and Commodity deflation. The question is who gets health insurance as cheap as the CPI calculations assume?

(July 13) There are many ways to examine the Jobs Report data, as this week in review displays. This recession and recovery has hit every sector and every age group. Younger workers (16-19 and 20-24 years of age) have had a problem finding work during the recovery. This month was different. "June Jobs Lacking for Teens" refers more to the substantial drop in participation of teens in the workforce, as compared with 2005 and 2005, more than it has to do with the huge, massive, gigantic spike in teens finding jobs, non-seasonally adjusted Current Population Survey (CPS) jobs. AS for the "Unemployment/Jobs Opening"  situation, I wish people would talk about the "negative unemployment rate" for older workers.

(July 13) Next week we will receive the Monthly and Annual Retail Trade Survey (MARTS) data. June does not have a holiday to boost sales. It is wedged between Memorial Day and Independence Day. We are in a Retail Renaissance. WE are on-track for our first $6 trillion retail sales year. Up is down and down is up. Even though it is expected that Sporting Goods/Hobby sales will be lower than last June, and it is more than likely that Electronics/Appliance sales will also be less than last June, It is expected that those two sectors will see a huge spike in sales month to month. The same is true in reverse. While every sector, except gasoline, is expected to fall month to month, non-seasonally adjusted, every sector, including gasoline, is expected to experience June to June sales growth. The total growth for the prior twelve months, the rolling year data, is expected to approach 5% this month. "June MARTS: Down is Up" is more data than talk.

While other are focusing on the Supreme Court nomination or President Trump's overseas visit, this column focuses on the economy. Full-time jobs boost spending, boost home sales, which boost retail sales, which boost jobs. Construction, Mining, and Manufacturing worker growth mean that we have more raw material to build things and more people to build them, which means more things to sell. If we increase wages, demand will increase, and the need for "social safety nets" decreases. Higher wages and higher earning mean that even after the tax law changes, revenue may rise and we may be able to reign in spending and the debt. 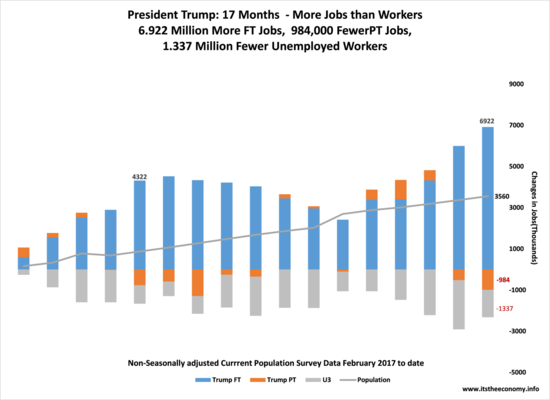 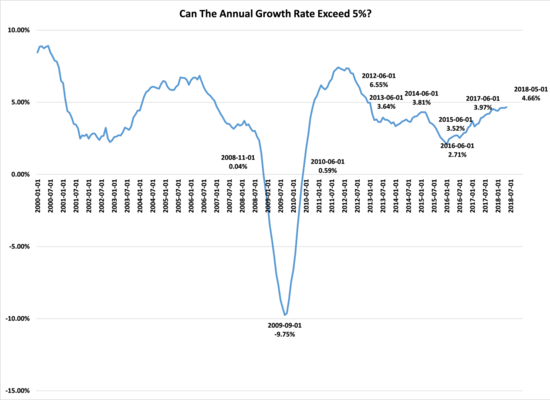 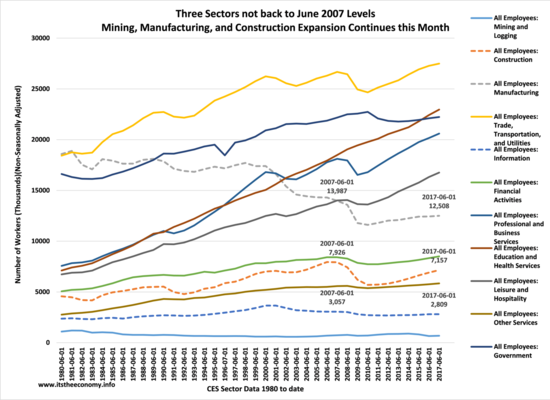 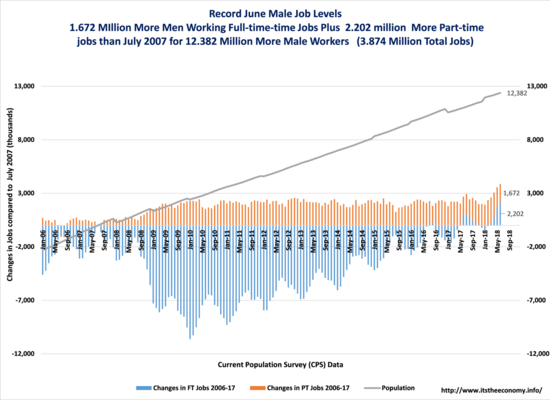 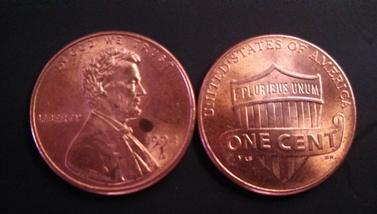 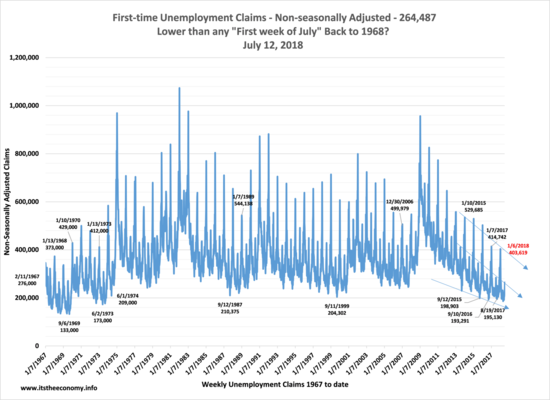