July is usually peak jobs month, according to the Current Population Survey (CPS) Jobs and Unemployment Data. The non-seasonally adjusted CPS data normally reveals peak levels of full-time jobs during July. Last year there was a spike during the Christmas rush that surpassed the July level. The headline "jobs number" is actually the seasonally adjusted (SA) Current Employment Statistics (CES) worker and wage data. This CES data is similar to the SA ADP Private Sector Payroll data except the headline SA CES number is the non-farm payroll data, which includes public sector workers. It is for this reason, and the situation that seasonal factors change  sector to sector, month to month and data set by data set that the headline SA ADP Private Sector Payroll number rarely aligns with the SA CES Non-Farm Worker and Wage data. What can we expect from "peak employment month" and the ADP report?

Month to Month should show payroll gains in all sectors except Information and Other Services. The month to month gains, as a percentage, should be largest in Construction, Natural Resources (M/L,) Professional Business Services (PBS,) Leisure and Hospitality (LAH,) and Manufacturing. The boom in Construction, LAH, and M/L make sense because these sectors are weather related and people "need to make hay while the sun is shining." The boost in M/L, Construction, PBS, and Manufacturing means that when the CES Payroll data is released we should see a rise in wages, hours worked, and workers. The June to July growth rate could be as low as 0.03% to 0.07%. This is not expected. It is more likely to be in the 0.12% to 0.16% range. If we see this kind of growth then we could see between 155,000 and 206,000 payroll positions added this month. We saw some of our best growth during November and December of 2018 and January 2019. We saw a weak May ADP number and a weak May CES number this year.A strong month to month growth rate could help bolster he July to July rolling year number.

July to July we should see growth in all sectors except Information. The growth sectors should be in M/L, Construction, PBS, LAH, and Education and Health Services (EHS.) We saw the rolling year growth rate grow from 1.81% during February, March, and April of 2018 to 2.10% during December 2018 and January and February of 2019, and slide down to 1.92% during May to 1.82% during June.

We could see a drop in the annual growth rate, again. Remember that we have seen backward revisions to the ADP data that have shifted payroll growth from the Trump years to the Obama years each of the past two February ADP reports. (see "February 2019 ADP Report: Remarkable" or "February ADP Up: Significant Revisions" from 2018.) If we see annual growth of just 1.75%, identical with July 2017, then we should see 199,000 payroll positions created. If we see the same growth rate as June of this year, or 1.82% then we could see 287,000 positions added (this would probably mean a 0.19% month to month growth rate, comparable to July 2014.) If we were to grow at an annual rate of 1.92%, as we did during May 2019, then we could see an astronomical  414,000 payroll positions created. This would be a record setting monthly growth of just over 0.32%. This is probably not going to happen.

We have seen these "rolling hills" of growth spurts and declines between 2012 and 2016 and between 2016 and now. Recent data has revealed that new home sales are chugging along at their best pace since 2007. The advance second quarter GDP data revealed increases in disposable income and personal savings. People are earning more money, saving some, and spending some.  We have seen our best January, February, March, April, May, and June retail sales months ever, this year. Increasing sales should spur an increase in hiring, especially for peak retail this November and December.  If employers would listen to the data instead of the Chicken Little Economists and Journalists who are forecasting a recession "because we are do for a recession," the sky is not falling,  then they may feel more comfortable with hiring more people.

The next article will focus on the CPS jobs and unemployment data and the CES wages and worker data. We may see similar patterns in growth or the order of the sectors with the highest growth rates may vary. Could we see total, NSA, CPS job growth through the end of the year? How high will the CPS Full-time job number jump, based on seasonal FT jobs? How much will the number of dual job workers jump? Will the jump in M/l, Construction, and Manufacturing numbers bolster the number of men in the workforce and the Men CPS FT jobs data? Will a jump in LAH and EHS Payroll positions carry over to the CES data and the CPS jobs mountain data? We will see. 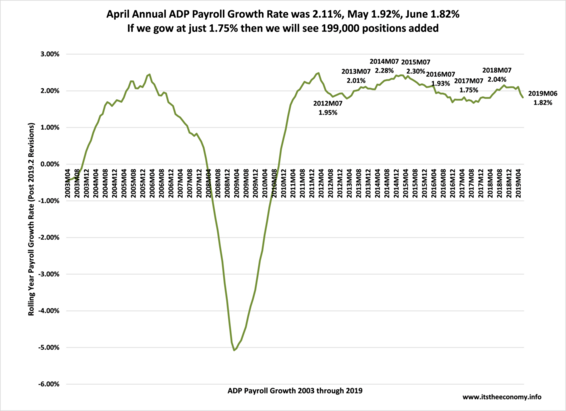 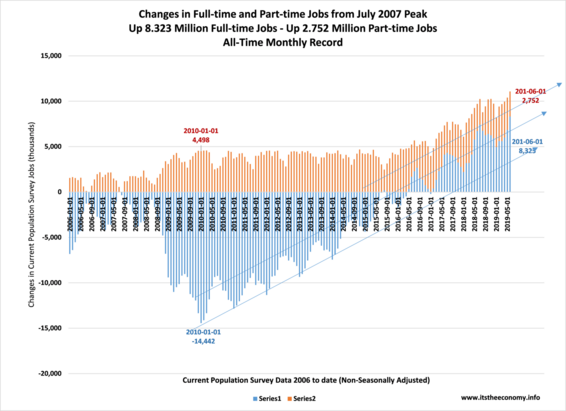 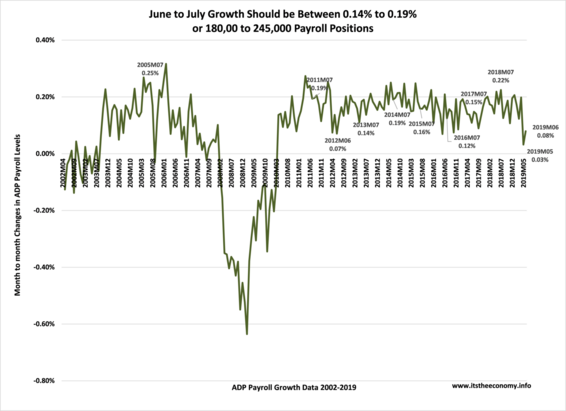