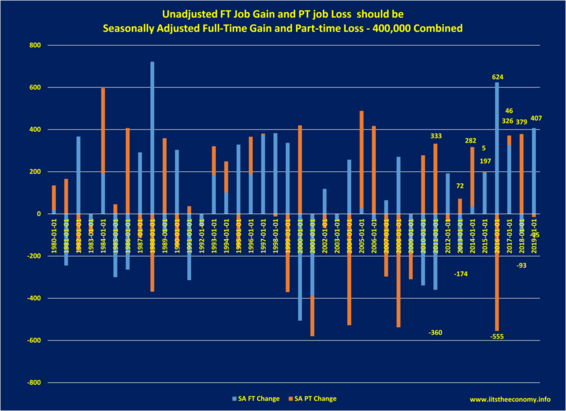 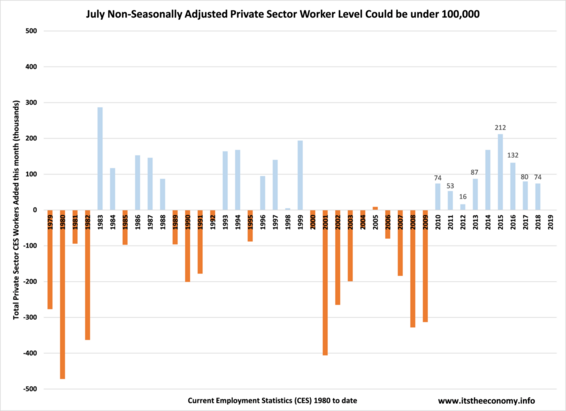 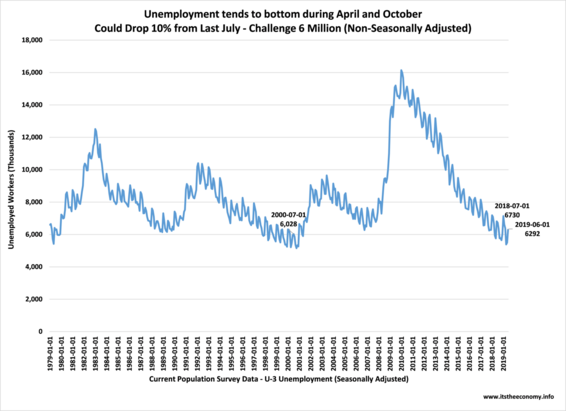 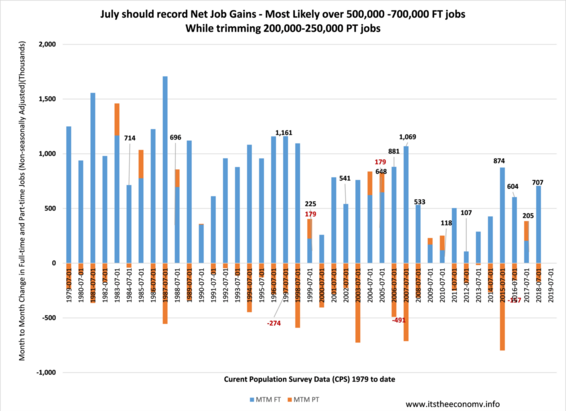 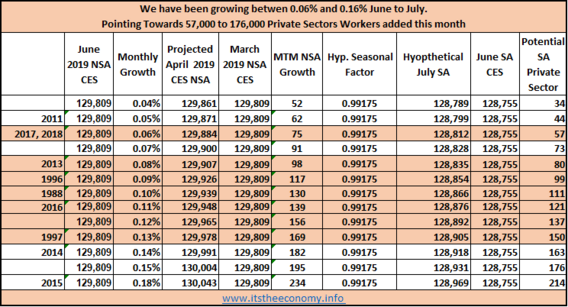 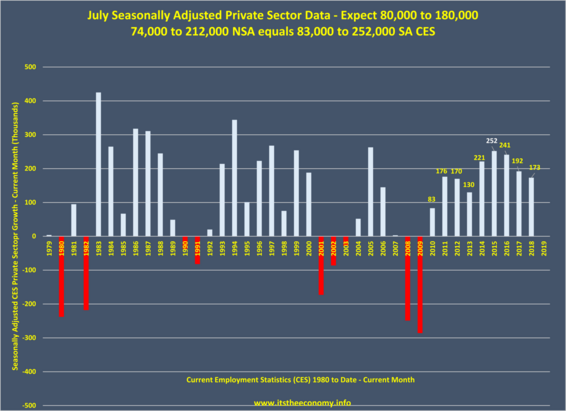 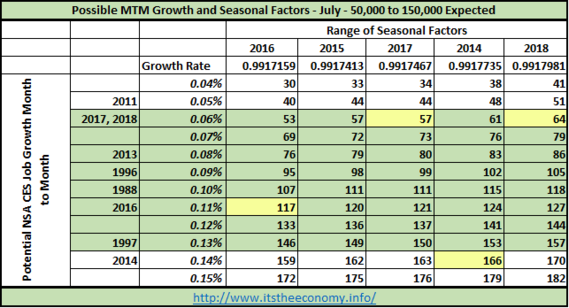 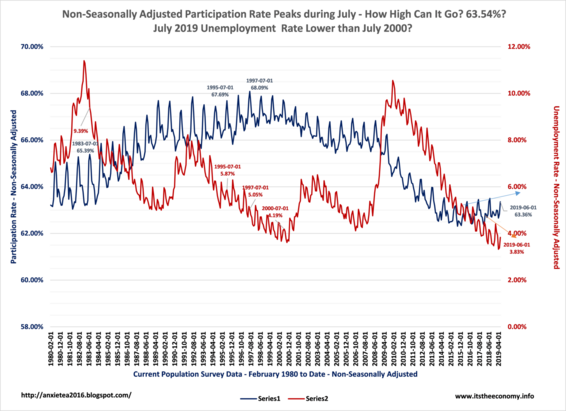 July is usually peak jobs month, according to the Current Population Survey (CPS) Jobs and Unemployment Data. The non-seasonally adjusted CPS data normally reveals peak levels of full-time jobs during July. Last year there was a spike during the Christmas rush that surpassed the July level. The headline "jobs number" is actually the seasonally adjusted (SA) Current Employment Statistics (CES) worker and wage data. This CES data is similar to the SA ADP Private Sector Payroll data except the headline SA CES number is the non-farm payroll data, which includes public sector workers. It is for this reason, and the situation that seasonal factors change  sector to sector, month to month and data set by data set that the headline SA ADP Private Sector Payroll number rarely aligns with the SA CES Non-Farm Worker and Wage data.

The ADP forecast is for Gain in all sectors except Information, month to month and July to July.The month to month gains, as a percentage, should be largest in Construction, Natural Resources (M/L,) Professional Business Services (PBS,) Leisure and Hospitality (LAH,) and Manufacturing.  Month to month growth indicates 155,000 to 206,000 payroll positions were added during July. The growth sectors should be in M/L, Construction, PBS, LAH, and Education and Health Services (EHS.) Annual Growth is projecting 199,000 to 224,000 payroll positions added this July. The month to month data is normally a better indicator. It was thought that the overlap was enough that we should see 199,000 to 224,000 positions added. It may be under 206,000.

The Non-seasonally Adjusted CES Worker data indicates that  a "jobs" number between 100,000 and 200,000 is most likely. July has been a weak month between 2010 and 2018 with the exception of 2015. We saw July declines in NSA CES workers between 2000 and 2009 with the exception of 2005. The month to month growth rates indicate that we should see 0.08% to 0.13% growth or between 80,000 and 150,00. This may give some analysts some concern. Most analysts focus on a three month average. They under-estimated growth as we were going gangbusters earlier during the year, and missed on the high side as we have been moving into steady, slower growth recently.

Last month we saw workers rise, hourly wages rise, and hours worked rise. We should see record July hourly wages. We should see hours increase, especially in LAH and Construction. LAH is the lowest paying sector, and normally has the lowest hours worked. If every sector is expanding July to July, and if wages are expanding in ever sector, July to July, this could be a repeat of last month with Gross Income surging over 6%.

Even with weak Current Employment Statistics "worker data" we can expect solid Current Population Survey "Jobs" data recorded. We used to hire more full-time workers during July. We still should see 500,000 to 800,000 non-seasonally adjusted (NSA) CPS Full-time (FT jobs added this month. We should also see 200,000 to 250,000 part-time (PT jobs trimmed. This would be a net gain of 250,000 to 600,000 jobs. It is possible for use to see a gain in part-time jobs and a gain in full-time jobs. The net gain in jobs means that we will have another record month for total number of jobs. We are climbing the jobs mountain.

The Unemployment picture is "interesting." The annual data has shown July to July drops in U-3 unemployment of almost 10% each of the past two years. The July unemployment level tends to rise from the June level as people say that they are still looking for work and unable to find work. Last year we had a NSA U-3 of 6.730 million. Last month we had a NSA U-3 of 6.292M. A 10% July to July drop would place us at 6.0 million. An increase month to month places us between 6.3M and 6.7 million. Don't be surprised is the U-3 level is recorded at 6.0 million, 6.25 million or 6.5 million.

There are other ways to examine the jobs and worker data sets. There has been considerable noise during the past few months and years that Job Openings (JOLTS)  are greater than unemployed workers. The job openings data does not delineate between full-time and part-time jobs or between seasonal and permanent jobs. The JOLTS data is comparable to the CES wages and worker data. The U-3 level comes from the CPS data. These data sets measure different things, have different sample sizes, and different margins of error. We might as well compare the continuing claims data with the U-3 data. Continuing claims are for those people who had a job that qualified for unemployment benefits that lost jobs and are looking for jobs. The CPS U-3 measures those out of work looking for work, whether or not they were previously employed. People are comparing an Apple (Openings) with Unemployed Workers (Tomatoes,) when they should be comparing Openings with Workers (Pears.) Should you compare Apples with Pears?

Next week we will receive the June JOLTS report. This Week we are receiving the July Employment Situation Report. There are four sectors that consistently have the most job openings, quits, separations, and hires: Education and Health Services (EHS,) Leisure and Hospitality (LAH,) Professional Business Services (PBS,) and Trade, Transportation and Utilities (TTU.) Three of these four sectors have three of the four lowest weekly wages: LAH, EHS, and TTU. The LAH sector is almost always the lowest paid sector with the lowest weekly hours worked with one of the highest employment levels. This means that they drag down the average hours worked and the average hourly wage.  If their hours and wages rise, and the number of workers rise, this could bolster the wage growth and could reduce the number of quits and separations.

Expect good news. Expect some variability from sector to sector. We may see month to month gains across the board, or we may not. It is possible that non-seasonally adjusted  EHS and TTU could drop. Government workers "will" drop, as they do every July. This will impact the non-farm payroll data. This column focuses on the privates sector data, and excludes the government sector data. We should see NSA CES workers rise July to July  with the exception of IT.  The seasonally adjusted data should improve for all sectors July to July and June to July. The largest gains should be seen in Mining and Logging (M/L,) Construction, Professional Business Services (PBS,) and Manufacturing.

We could see 190,000 to 224,000 ADP Payroll position creation and only see 170,000 to 190,000 seasonally Adjusted Private Sector workers added. The headline non-farm-payroll number should be even higher than this.