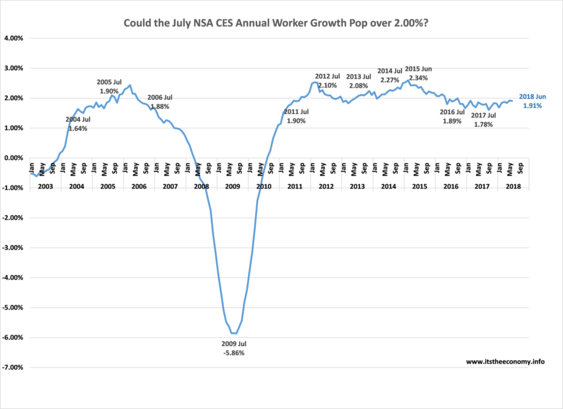 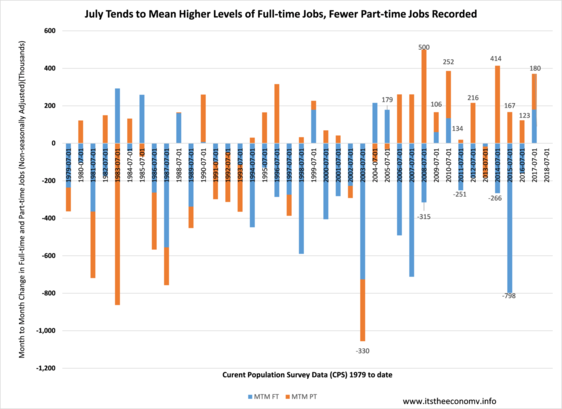 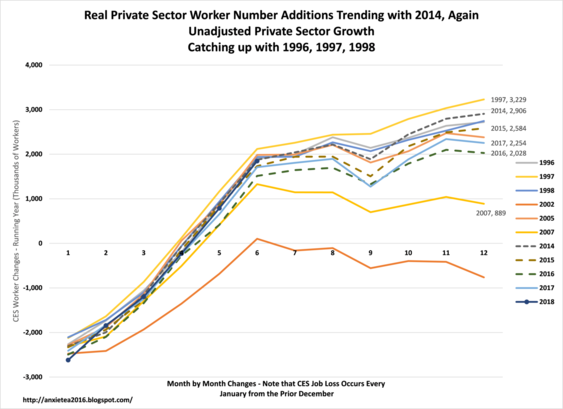 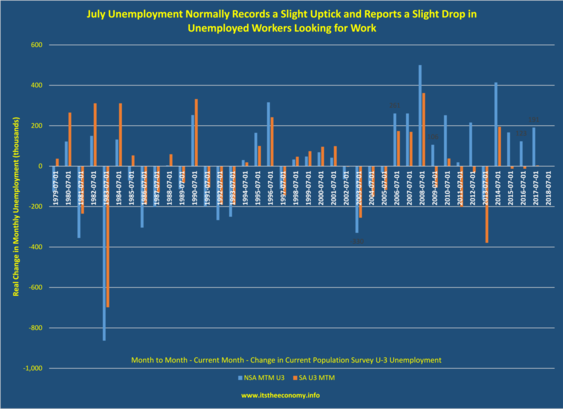 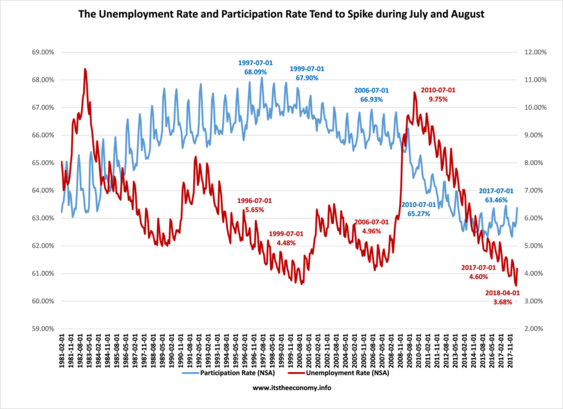 This week is "Jobs Week." Wednesday we will receive the ADP Payroll report for July. This report measures payroll jobs and only reports private sector data that has been seasonally adjusted. Friday we will receive the June Jobs Report, or Employment Situation Report, from the government. This report is created using two data sets, the Current Population Survey (CPS) data and the Current Employment Statistics (CES) data. The CPS data measures full-time jobs, part-time jobs, unemployed workers, and the workforce population. The CES data measures workers, private sector workers, non-farm payroll workers, wages for the private sector, and other data. The three data sets have different sample sizes and measure different things. The CPS and CES data sets have seasonally adjusted (SA) and non-seasonally adjusted (NSA) components while the ADP data only reports seasonally adjusted data. The CES data underwent major revisions between the December and January Jobs Reports. The ADP data underwent major revisions between the January and February Payroll Reports.  The best that we can hope for is to find trends in the month to month data and the same month annual growth by sector and in total.

It was projected in the ADP Forecast article that we could see growth in all sectors year to year and an increase in jobs in all sectors expect Information Technology (IT) on a month to month basis. The month to month growth indicated 200,000 to 300,000 private sector payroll jobs could be added. The annual growth rate projected numbers between 126,000 jobs and 450,000 jobs added. The overlap is 200,000 to 250,000. It was projected that we could see an official ADP number around 249,000 without revisions to the June data. If the June data is revised up by 25,000 then the July number would be reduced by 25,000 or 224,000 total payroll jobs.

The "Jobs Report" is also projecting solid month to month and July to July growth. There is a difference between the CPS data and the CES data. The data also indicates that the non-seasonally adjusted unemployment numbers should jump a little, and the the combination of the added jobs and added unemployed workers will boost the participation rate. U-3 Unemployment tends to peak during July, even as the weekly unemployment claims data, first-time and continuing claims, are at or near historic lows for the mid-July period. What can we expect from the two data sets?

The non-seasonally adjusted CES worker growth has been one of the best through June. So far more NSA CES Private Sector workers have been added to the economy than were added through June 2015, 2016, and 2017. We are even approaching the level of worker additions recorded during 2014. The NSA CES growth rate for June 2018 was stronger than July 2017 and July 2016. The annual growth rate is still slower than July 2012, 2013, 2014 and 2015. Remember those wholesale data revisions from January? Those revisions trimmed the annual growth rate for 2017. We should grow faster than we did during 2017. We should grow faster than July 2016. The data indicates that if we grow the way we normally do during July that we could grow the economy by 207,000 to 257,000 or even 294,000 SA CES Private Sector workers.

The month to month growth rate should be faster than 2016, as well. We should also grow faster than July 2017. This means that we could see 241,000 to over 327,000 SA CES workers added to the economy this July. The overlap between the two projection is roughly 241,000 to 294,000. Split the difference and 267,000 is a very possible outcome. Watch the revisions to the May and June data. If the June data is revised up by 25,000 then that growth is moved from July back to June and the July number is reduced by 25,000 to 242,000. Remember that both the month to month and July to July growth data are projecting the possibility of over 300,000 private sector workers being added to the economy during July.

Unemployment and Participation Spike during July. Last month there were some analysts that were caught off guard by the spike in unemployed workers because the weekly unemployment claims data has been dropping. The most important thing to remember when this report is released is that the U-3 unemployment data measures worker who are out of work who want to work, the unemployment claims data measures those who have recently lost work who may, or may not be, searching for work. The Jobs Openings data has no correlation with the U-3 unemployment data nor the weekly claims data. The JOLTS data for June will be released this month while we are receiving the July Jobs Report this week. The three data sets measures three different things and have three different sample sizes. You are comparing an apple to a pear to and orange. All three grow on trees. All three are fruits. Do not obsess over "negative unemployment" where there are more job openings than unemployed workers.

Full-time Jobs Should Record a Jump and Part-time Jobs should Record a  fall. We normally see NSA FT jobs increase and NSA PT jobs decrease during July. We saw more part-time jobs trimmed than full-time jobs were added during July 2015 and July 2016. This did not impact the former President's "Job Streak" data because his streak was using the SA CES Private Sector Worker data and not the NSA CPS jobs data.

The Seasonally Adjusted levels of Full-time an Part-time jobs could both rise - combined they should be positive. This is the real reason why the participation rate should improve this month.

There are other components that will be scrutinized this month. This column writes articles after the release on the jobs report pertaining to Wages and Workers, The Five Presidents at ___ months, the Job Situation for Male and Female workers, the "Red, Gray, and Blue" series, and the Multiple Job Holder series. 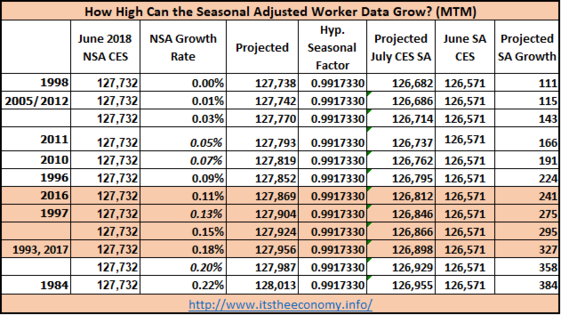 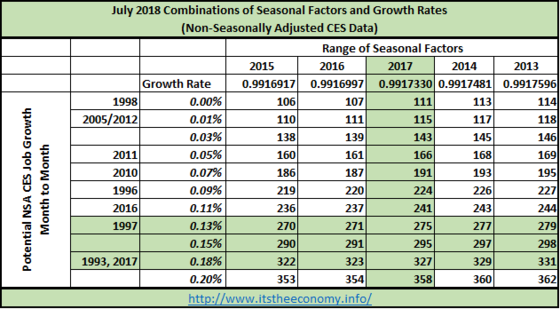 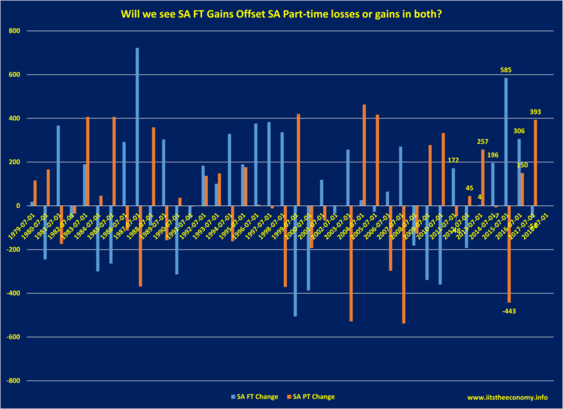