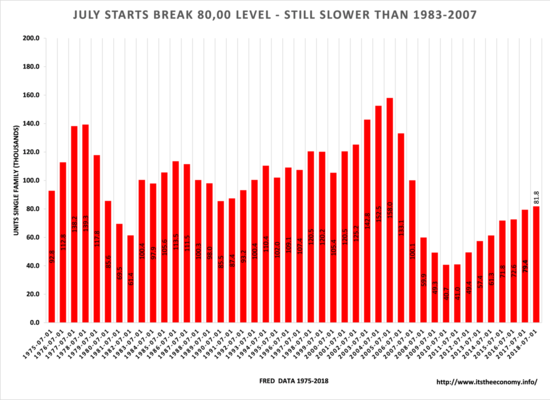 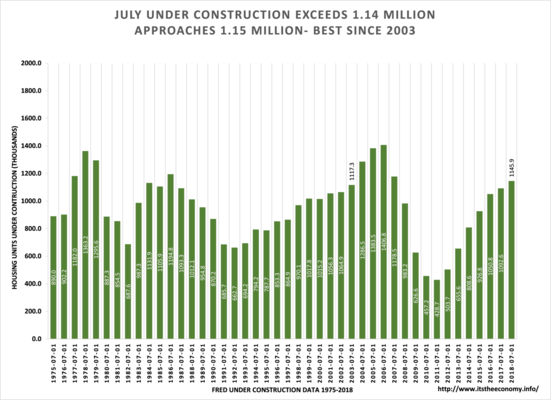 The July New Construction Report was released this past Thursday at the same time as the Weekly Unemployment Claims data was released. Both should have received more attention as both were excellent.

New Home Starts broke through the 80,000 level. It was projected that the new single family starts should have broken the 80,000 level and approach the 85,00 unit level. The actual recorded level was 81,800. The highest level of July Starts since July 2007 should be garnering some headlines. It is fairly obvious that we need starts to get units under construction, and we need units under construction to see completions rise. We need completions to rise in order to see inventory rise, and we basically need inventory to rise in order for sales to rise.

July Completions at 100,900 units - Better July 2008 through 2016. The units started, under construction, and completions were all within the expectations projected in the forecast article.  This is good for future new home sales and the new home inventory. We should continue to see the inventory levels edge up from 300,000 units to over 350,000 units over the next year.

The non-seasonally adjusted data was good this month. There appears to be a resurgence in completions. The seasonally adjusted completions data is "only" down 5.2% from June 2018 and down 3.9% from July 2017.. The seasonally adjusted starts data is much weaker than the non-seasonally adjusted data at up 0.9% month to month and 2.7% July to July. The growth in new home construction should yield a boost in new home sales and new home inventory when that data is reported this Thursday, August 23rd. This should also help continue to boost the MARTS retail sales data for August through the end of the year. The need for finishing labor may continue boosting construction hiring. Overall, this was a strong report. This column has commented for years that it was going to take year, if ot a decade or more, for the construction levels to return to pre-recession levels. Right now the starts and completions data is "stuck in the 1990s." The boom of 2005, 2006, and 2007 "created" the bust of 2008, 2009, and 2010. A healthy starts level may be between 110,000 and 130,000 units. The same could be said for completions. Sometimes they are in sync while other years one outpaces the other. 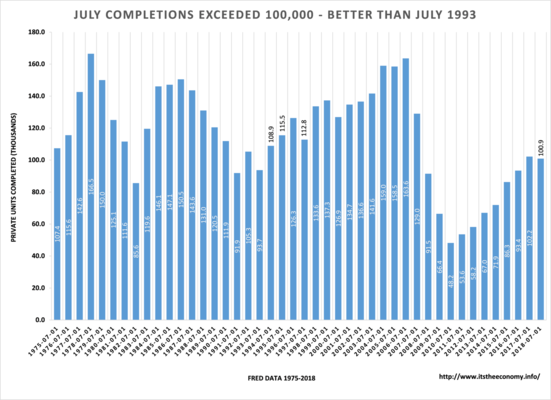