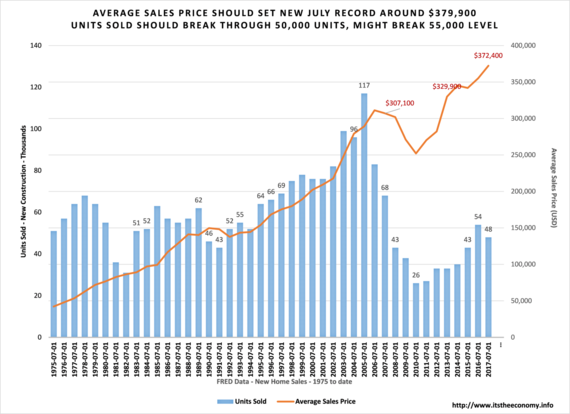 There are three main real estate reports that this column examines: The New Construction Report, being released August 16, the New Home Sales Report, being released August 23, and the Existing Home Sales Report, which is being released August 22nd. There are a number of ways to examine the data. The data can be examined from a same month to same month perspective (July 2017 to July 2018.) The data can be examined from a month to month perspective (June 2018 to July 2018.) The data can be assessed on a rolling year basis (August 2017 through July July 2018.) The current year data can also be measured (January 2018 through July 2018.) When the rolling year data lags the current year data the market is expanding. When the Current Year data is greater than the current year data for the prior year the market is expanding. We can see one month be better than the same month the prior year and have a market that is cooling. It all comes down to trends.

New Home Construction should improve July to July Across the board. The month to month data projects a range of 79,000 starts to 86,000 starts. The July to July data projects 84,000 to 92,000 starts. The overlap is 84,000 to 86,000. Pre-recession we used to have a minimum of 100,000 starts during July. If a similar approach is used for the under-construction data and the completions data then we should see over 1.16 million units under construction. The data has been trying to project a 1.2 number for months. It isn't going to happen in just one month's time. We have to hit 1.18 million units under construction first. The completions data has been soaring. This could slow the growth of under construction units. Last July we had over 100,00 units completed. The month to month and July to July data is projecting 108,000 to 114,000 units completed.

The  Current Year Data tells us where we are with respect to prior years.  If you add all of the months of growth this year and extend it out one month you can see slightly different numbers.

The Rolling Year Data tells us where we have been. If the rolling year data is lower than the current ear value then the economy is growing.

When all the data is combined it appears that Starts will be strong. The 84,000 to 86,000 may lean towards the high side and approach 90,000. The under construction data also looks to trend higher month to month and year to year. 1.14 to 1.16 million is a possibility. Completions have been soaring. The rolling year and current year data are pointing to the high side of the month to month and July to July growth projections. Expect a non-seasonally adjusted value of 112,000 to 114,000. A value of 120,000 is possible, just not probable.

The data is looking good from a month to month perspective, a July to July perspective, and the rolling year data, as well as the current year data. The acceleration in the new construction data begets well for the new home sales data. It is also important for retail sales and jobs. The retail report will be released this week. We are still on track for a $6 trillion total retail sales year. This would be the first time that this has ever happened. We are in a Retail Renaissance, not a Retail Ice Age. We are seeing improvement in the Mining and Logging, Construction, and Manufacturing sectors.  New home sales should mean more jobs, even in professional services. 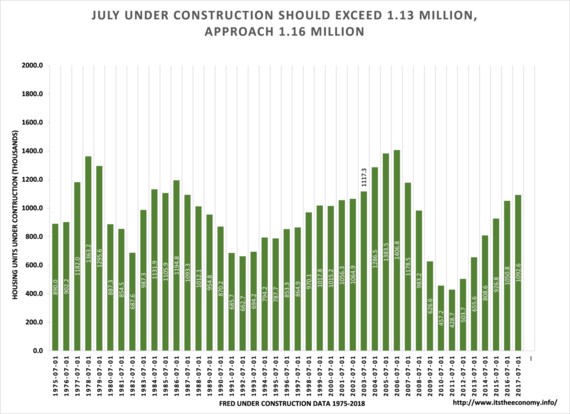 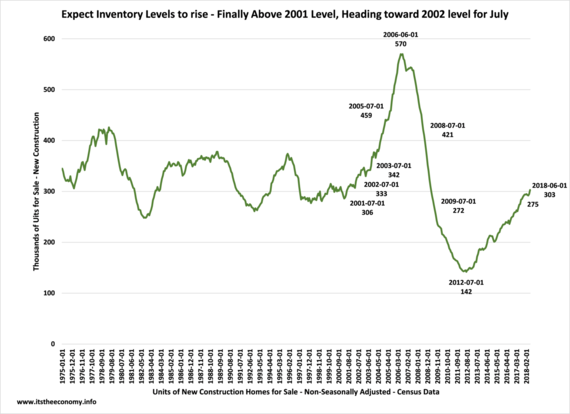 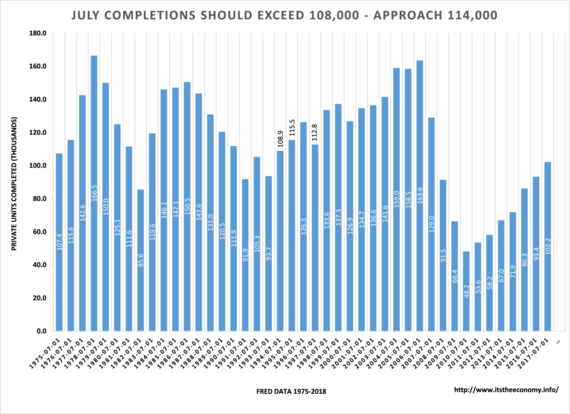 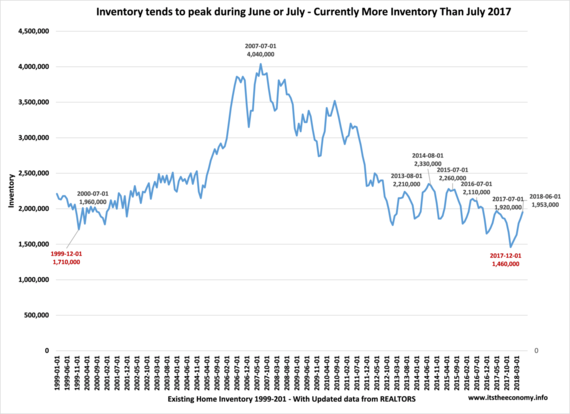 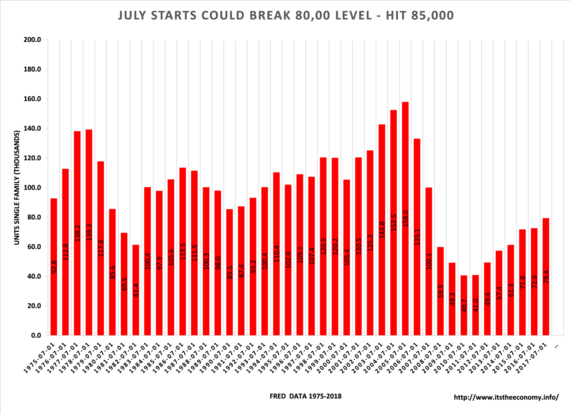 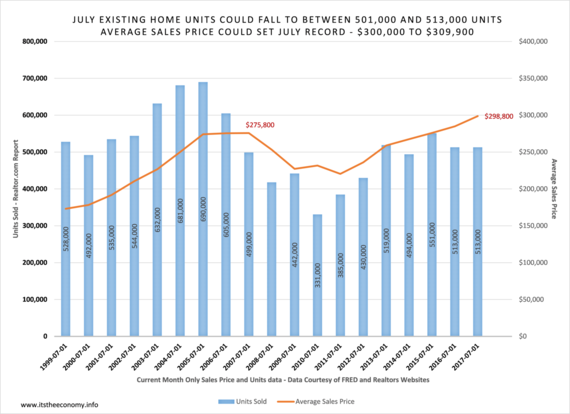 The existing home market is an essential part of our economy. The Great Recession was a housing recession, a jobs recession, a retail recession, and a revenue recession for the government. People who buy homes need Realtors, lenders, appraisers, home inspectors, contractors, retail sales people, home and garden people, new furniture, new carpet, fresh paint, new landscaping.  We should see well over 50,000, or 60,000, or 70,000, or 80,000 units sold during July. June 30th is the peak closing day, especially if that Friday is June 30th. This year Friday was the 29th. People like to close at the end of the month to avoid "odd day interest" and to use the time between the 30th and the 4th of July weekend for moving.

Inventory Matters. We hit a record low inventory level for existing homes this past December. The data available only is found back to 1999. We had 1.7 million units for sale during December 1999. December 2017 we only had 1.48 million units for sale.It is "impossible to sell" what isn't for sale. This column, and its sister site, "Reclaiming Common Sense" has been discussing the housing inventory situation for years.

Why spend so much time discussing inventory. The Law of Supply and Demand says that if inventory is low and demand is high, prices will rise faster than normally anticipated. Inventory showed an uptick from the June 2017 level, and an uptick from the May 2018 levels  .It does not appear that we will set a record low level for July inventory this July.It appears that inventory may poke through 2 million units for the first time since 2016. Inventory can go either way during July, so 2 million may not be hit this month.

Units sold could drop month to month and grow July to July. Normally June is the peak month, so a drop off the peak can be expected. It is also possible that some of those people who wanted to close on the 30th pushed the closing back to the 2nd or 3rd of July to use the fourth of July Falling on a Wednesday to have a long weekend to move. We should not see a drop below 500,000 units, even though the month to month and July to July data say that this is a possibility. We could also see a pop from June as people attempt to finish out the Summer in a new home. The month to month and year to year trends are "one big overlap." The middle of that overlap is 503,000 units.

The Rolling Year average and Current Year Average Sales Prices are pointing in a similar direction. The Rolling year prices are showing that the average sales price increased from June 2017 to June 2018. June 2018 was higher than June 2017, so the average sales price should pop higher to $379,400. This year we have seen some months where there were not new record highs established, meaning that the current year data is trending lower than June of 2018.  This analysis yield an average sales price of $372, 285.  This way we are looking more to a number around $374,9000, still a July record.

New Home Inventory should continue to climb. Completions should be greater than units sold. Units sold could spike.It is unlikely that they would all be sold. We may see the inventory jump to 306,000 units, the same level that we had during July 2001. It is doubtful that it would spike to the level seen during July 2002.

The Data for July is remarkable. There is a considerable amount of words that can be written.  The new home construction numbers continue to build momentum upward. The existing home inventory should climb, allowing for more sales. More people are working full-time this year than last year, and the July data for total jobs was a record high, as was the full-time job level. New home inventory is in a "safe zone" of 300,000 to 400,000 units. It could take two the three years to reach the 400,000 level. While both the new home average sales price and the existing home sales price could drop month top month they both should rise July 2017 to July 2018.Inventory is "King." New home and existing home inventories should both rise this month, or at least not drop below last July's level with regard to existing homes.