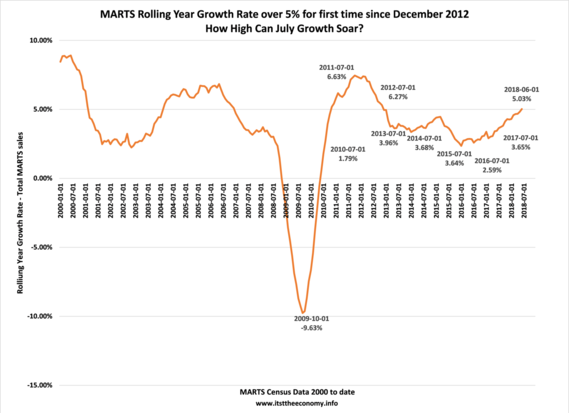 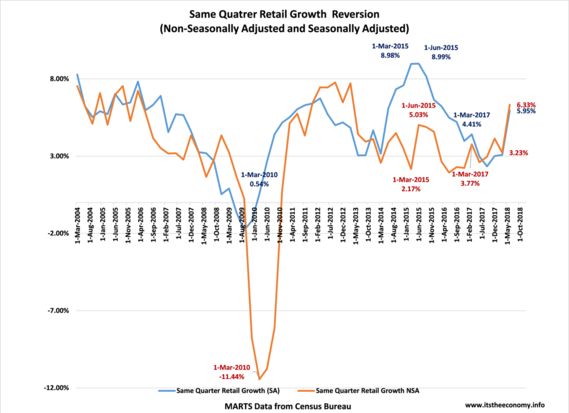 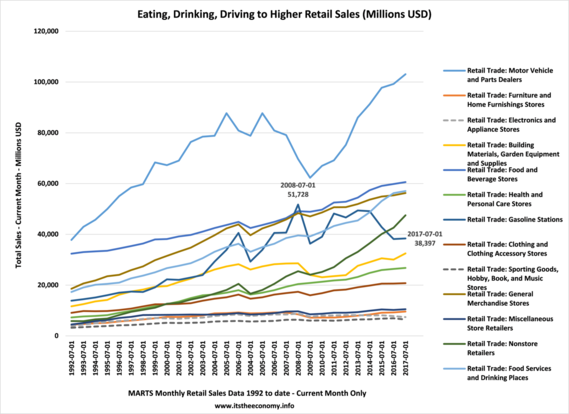 This week the July Monthly and Annual Retail Trade Survey (MARTS) report will be released for the month of July (August 15.) The trend this year has been for a serious growth same month over same month, to the tune of 5% non-seasonally adjusted (NSA) growth.  The month to month data points one direction while the July to July data points in a different direction for some of the sectors. The most important trends to note is that Non-Store Retail seem to be grabbing sales from the Electronics and Appliances sector and the Sporting Goods, Hobby, and Books sector. It is also important to note that it appears that the seasonally adjusted MARTS data has been boosted during 2015 and 2016 and deflated during 2017. We are not in a "Retail Ice Age," as some would lead you to believe, we are in a Retail Renaissance. What can we expect from the July MARTS data?

We have been in a Real Estate Renaissance. The new home sales, and new home construction, have been doing quite well. Existing home sales have been a little sluggish due to a lack of inventory. Both can spur Furniture and Furnishings sales, Home and Garden Sales,, Electronics and Appliance sales, and evening new car sales - why place an "old' car in a new garage?

We are heading into the "Back to School" season. We should see an uptick in Clothing and Apparel sales month to month and July to July.  We should see an uptick in Food and Beverage store sales and Food and Drinking Establishment Sales. People like to grill out and eat out during the Summer. We should see a non-seasonally adjusted drop in Building Material and Garden Equipment sale as the weather gets warmer and people are "done" will planting for the Summer. Furniture sales could drop a bit month to month as people are "no longer staging" their homes for sale or buying new furniture for their new homes.   We could see a month to month decline in sales at gasoline stations as the Memorial day prices fade from memory. It is important to note that gasoline sales during July 2017 were well off the peak 2008 level and even low when compared with July 2011, 2012, 2013, and 2014 levels.

The trailing annual growth rate can go either direction during July. This is self-evident. Sales either increase or decrease month to month, as they are rarely "flat." Often months have characteristic behaviors. Normally we see jobs expand, and worker expand, during May, June, and July. First-time unemployment claims tend to hit their annual low the final week of September and continuing claims tend to hit their annual low the first week of October.  The Annual growth rate for July was higher during July 2010, 2011, 2013, and 2017 the Annual growth rate  during July was lower than June during 2012, 2014, 2015, and 2016.

The month to month seasonally adjusted data is "all over the place." The only constants are that total sales should increase year to year, in total, and especially in Food and Drinking Places. The most important takeaway id that the Sporting Goods and Electronic Sectors should see seasonally adjusted year over year declines. Expect an 8% to 10% increase in Non-store Retail, seasonally adjusted.

Expect strong year to year growth and possible weakness month to month to be recorded. The prospect for strong retail sales to be reported is present. This means that the first month of the third quarter could boost GDP significantly.