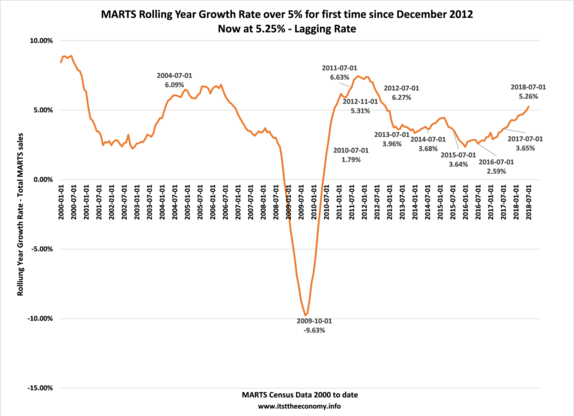 The monthly and annual retail Trade Survey (MARTS) data report tells us where we are with regard to the past month and the past year. There were massive revisions to the prior years data with the release of the June MARTS report. There were swaps of sales between the electronics and appliance (EA) sector and Sporting Goods, Hobby, Books and Music (SGHBM) sector that went under the radar. When the advance reports were released this year we had the best non-seasonally adjusted sales data for total sales for each of the first six months of the year:

What caught some analysts off-guard was last month's spike in seasonally adjusted (SA) retail sales of 6.9%. If people would pay attention to the non-seasonally adjusted data (NSA) as much as they pay attention to the SA data then they would have seen that the NSA MARTS data has been strengthening since the second quarter of 2016. So why was the SA MARTS data showing a slower growing economy?Why was the NSA MARTS data showing a slowing and still growing economy during March 2015 while the SA MARTS was showing a rapidly booming economy?

Some Sectors grow during July while others often decline. The forecast article for July projected, non-seasonally adjusted, that we should have seen a uptick in Food and Beverage Sales (FBS) a surge in sales at Food and Drinking Places (FDP,) and an uptick in Clothing Sales as people get ready to head back to school. It was projected that we could see a drop in motor vehicle , and believe it or not, a slight drop in Gas Station Sales. (MVP) sales, furniture sales, Electronics and Appliance (EAS) sales. It was thought that the upward momentum would move the rolling year growth rate up from the July level. It was projected Sporting Goods (SGHBM)  and EAS would decline July to July. What was recorded and what was reported in the July Advance MARTS report?

The Month to Month data showed improvement month to month in Food and Beverage Stores, Gasoline, Clothing, and Non-Store Retail.  Food and drinking places saw a modest decline. Otherwise the data was pretty much as expected.

Ten of thirteen sectors had their best July sales months ever. The only three that were lacking were Gasoline Sales, EAS, and SGHBM.Even with a 21,63% spike in gasoline station spending this was not the most we had spent during July on Gasoline. The Summer of 2008 has that record. We were close to the levels recorded during July 2011, 2012, 2013, and 2014.

The Annual Growth rate through July is 5.26%. The last time that the rolling year growth rate was over 5% was November of 2012, as the economy was slowing.  We have spent years with the annual growth rate exceed 5%:

This means that we could have strengthening sales growth through the end of this year, and if it starts up again during 2019 that it could last another year. That or it could stop after December of this year. If we grow at 5.26% then

There were significant downward revisions to the June Data - Still a June Record for sales.  The largest downward were for Motor Vehicles and Parts, Gasoline Stations,  Non-Store Retail, and Building Material and Garden Equipment. We still had 554 billion in retail sales. 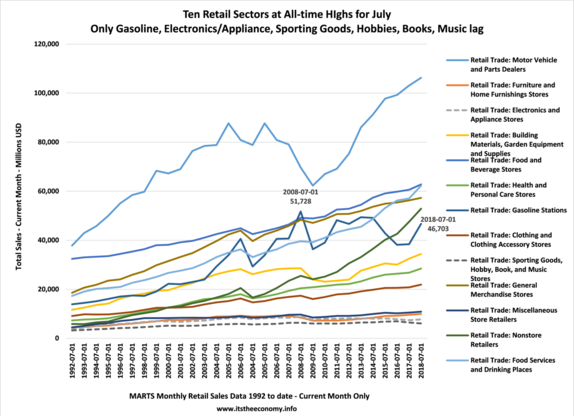 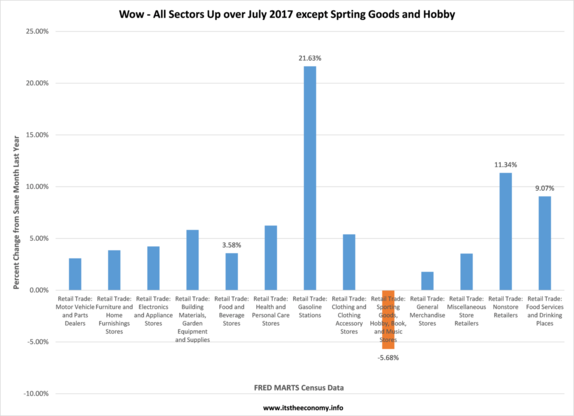