According to the U-7 We have Negative Unemployment for those over the age of 60 years old. This is non-sense. We do not have negative unemployment. What we have is a higher level of participation, and good participation, in the form of jobs, full-time and part-time. More people are working now that during July 2007 and fewer are unemployed. This means that we have fewer unemployed workers than we had during 2007 and therefore a negative unemployment rate.

The data was strong. It is Summer, so people are working one, two, or three jobs. Full-time jobs, some most likely  seasonal, hit an all-time high. July Participation was the highest since July 2013. Our older population is still participating. 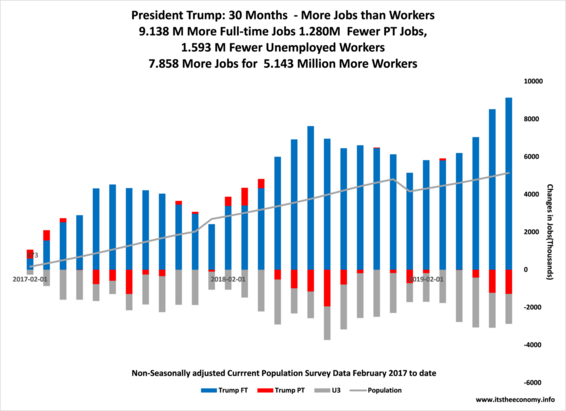 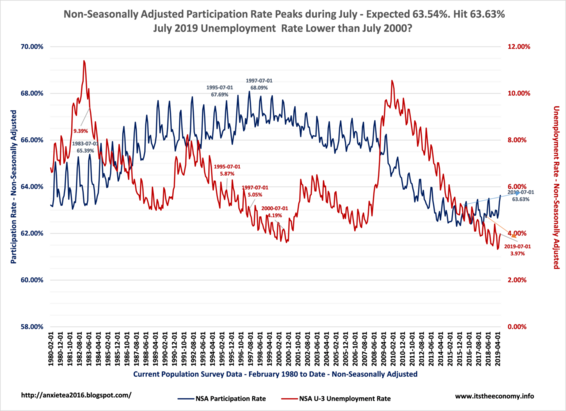 We have record levels of jobs for those over the age of 55 years old. We have more people who are 55-59 years old working than we have who are 20-24 years old. This was not the case prior to the recession. This July we saw a spike in workers over the age of 55 working in both the month to month category and the July to July category. We also saw a similar double boost for those 16-19 years old and 20-24 years old. We saw a drop in jobs being worked, both June to July and July to July, for those 25-29, 45-49, and 50-54 years old.

There have been many stories about how retiring Baby Boomers are dragging down the participation rate - this is not entirely true.  The headlines had been that a record level of Baby Boomers were reaching retirement age every month. That is different from saying that a record level of Baby Boomers are actually retiring. "Boomers" are considered to be those born between 1945 and 1964. These people would be 55 years old to 74 years old right now. Those who are 55 and older are participating more than ever. The participation rate is up nearly 4% for 60-64 year old, 6% for those 65-69 years of age, 2.5% for those 70-74 years of age, and nearly 2% for those over the age of 75. These are the comparisons between July 2007 and July 2019.

The July Jobs Report, or Employment Situation was released two weeks ago

The July Employment Situation data was better than it was reported. We have 1.451 million more full-time jobs and 667,000 fewer part-time jobs than last July. We have more people working this July than last July and more than have ever worked.  Full-time jobs spiked, and unemployment rose slightly from the June 2019 level. Even so, the unemployment rate was the lowest for the month of July since July 1969.

So far this column has published the articles:

This column has produced another series titled "Red, Gray and Blue, our aging workforce." This series has detailed how those under the age of 25 have been not participating at the same levels as they were participating prior to the recession. It has also shown how those over the age of 59 years old have been "over-particpating."   What happened this month is quite remarkable.