Theforecast for July was a drop month to month in Building Material and Garden Equipment Sales (BMGE,) Health and Personal Care Sales (HPC,) Sporting Good, Hobbies, Books and Music Sales (SGHBM,) and a drop in Miscellaneous Sales (MISC.) The largest gains were expected in Clothing and Clothing Accessories (CAC,) Non-Store Retail (NSR,) Furniture and Furnishing Sales (FHF,) and Food And Beverage Stores (FBS.) All sectors were expected to growth July to July, non-seasonally adjusted.) The same month growth was expected to be between 3% and 7%.

Another Record Retail Sales Month. Retail sales have been improving since the bottom of the recession. This is not really a big surprise. The good news here is that we eclipsed the $500 billion monthly total retail sales mark for any given month during December 2015 and repeated during December 2016, and December 2017. We eclipsed the half trillion dollar mark eight time last year, and four time by July. This is our fifth time this year.  We could finish the year with nine or ten months over $500 billion and we might have our first $600 billion month this December.

Month to Month we grew by 2.73%. The largest month to month gains, non-seasonally adjusted, were in NSR (13.76%,) FHF, GASS, and MVP.  There were month to month contractions in BMGE, SGHBM, and  GM. The lowers and shovels. drop in Building Material and Garden Equipment sales is probably because everyone bought what they needed for the Summer and it is too early to buy snow blowers. The drop in Sporting Goods, Hobbies, Books and Music is probably a shift to Non-Store Retail.

Same Month Sales grew by 4.79%. There were three sectors that saw same month declines:  EAS, CAC, and BMGE. The drop in Electronic and Appliance sales could be due to a slower existing home sales month this June compared to last year. This could also be a shift to Non-store Retail with people ordering on-line and picking up at the store (technically non-store sale.) The drop in clothing sales could be due to clothing (apparel) deflation of 0.5% during July. (See: "July Inflation: Watching Commodities.") NSR spike, jumped, exploded by 19.2%. There was also a gain of 7.70% in MISC sales, and further spikes in HPC, MVP, and Food and Beverage Stores. Must have been some big Independence Day Celebrations.

Current Year Sales grew by 2.97%. This is nowhere near the rate recorded for July 2018 when we grew at 5.53%. We got off to a slow start during January, following an anemic 0.37% same month growth during December. A record is still a record. Growth was under 2% during February, March, and June. Current year sales are down for FHF, EAS, BMGE, CAC, and SGHBM. The drop in Clothing, Electronics and Appliances, Furniture, and Sporting Goods, Hobbies, and books, and Music can be attributed to a shift to non-store retail. The spike in non-store retail is 13.7% through July. The spike can be seen in the "Mixed Messages" graph.

The Seasonally Adjusted Data paints a similar picture. Current year growth was slowing , now up to 3.08%. Rolling Year Growth down to 3.35%. Current Month Growth 3.45%. Same month growth was up for roughly half the sectors and down for half the sectors. Non-store retail is up 15.95% from last July and 14.04% year to date. This is the Retail Renaissance. 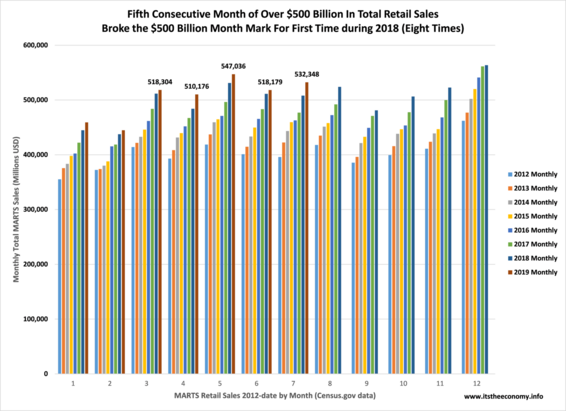 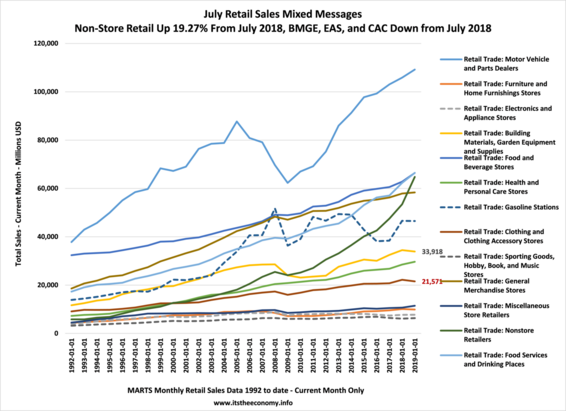 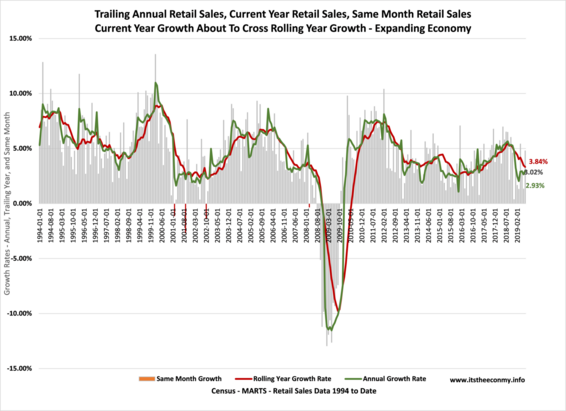