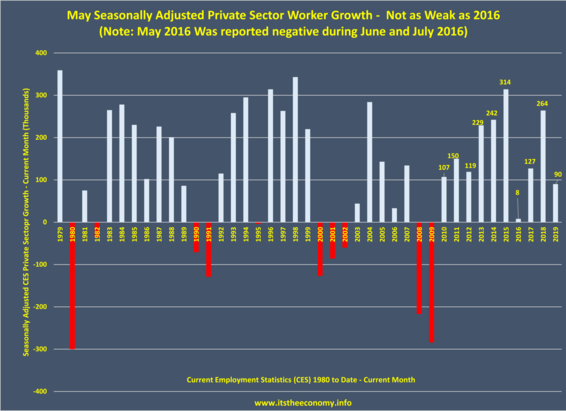 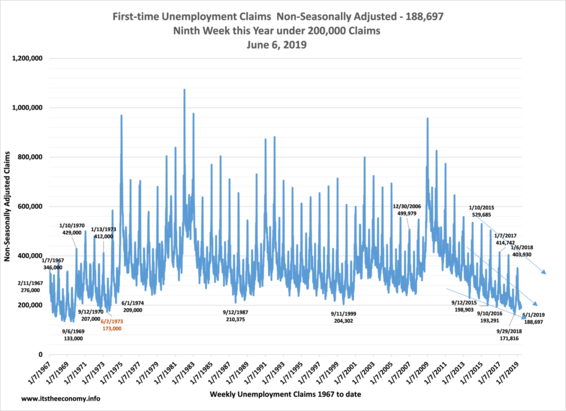 We also received some "weak" payroll and worker data. What happened?

The first week of the month is normally the time that we receive the ADP Payroll Report on Wednesday, the weekly unemployment claims report on Thursday, and the government Employment Situation Report, or Jobs Report," on Friday.  That happened this week. Last week this column produced an ADP forecast article. This week an Employment Situation Report forecast was published. Instead of a hanging curve, we were thrown two spitballs and a fastball.

(June 4)  The key principle of understanding the weekly unemployment claims data or the Jobs Report data is to understand what could be expected. The article "May Jobs Report May Be Huge" examined the Current Employment Statistics (CES) worker data and the Current Population Survey (CPS) jobs and unemployment data. It was projected that we should see growth in all CES sectors month to month, except Government and Education Health Services (EHS) and May to May, non-seasonally adjusted. There were concerns that we could have another May comparable to May 2016. The CPS data was projecting non-seasonally adjusted (NSA) growth in full-time (FT) jobs and a substantial contraction of part-time(PT) jobs, as FT jobs replaced PT jobs. It was projected that just the reverse could be seen with regard to seasonally adjusted data (SA) as SA FT jobs contract and SA PT jobs increased from their April levels. "May Jobs Report May be Huge" was anticipating strong month to month and May to May growth.

(June 5) Wednesday we received the May ADP Private Sector Payroll Report. "May ADP: Good Annual Data, Weak Monthly" reported on the significant drop in month to month growth and how it impacted the annual growth. We saw annual growth in all sectors, as projected. We did not see month to month growth in all ADP sectors. We saw contractions in Construction, Natural Resources, Mining and Logging, Manufacturing, Information, and "Other Services." This report "warned" of potential weakness in the "May Jobs Report." The ADP Payroll data, while similar to the CES Private Sector data, does not include the government worker data that the Non-Farm Payroll Data included  in the Non-Farm Payroll (NFP)  CES data. We came off track with the 2014 data this month. Right now we are trending with the 2015 and 2016 data.

(June 6) The weekly unemployment claims  report was overshadowed by the weak ADP Payroll Report and questions regarding what it would mean for Friday's Jobs Report. "Unemployment Level Continues to Fall" noted that this was the eighth week that the non-seasonally adjusted (NSA) First-time unemployment (FTU) claims data was recorded under 200,00  claims. This places us ahead of last year's pace.  The continuing claims data was expected to fall. It was virtually unchanged, as was the Insured Unemployment Rate.  The NSA FTU fell from 199,094 to 188,697. The NSA Continuing Claims data rose from 1.509 million to 1.511 million while the NSA IUR was unchanged at 1.05%.

(June 7) To say that the May Employment Situation Report was disappointing would be an understatement. While we did see annual growth in all sectors, except Information (IT,) we saw month to month contractions in IT, Education and Health Services (EHS,) and Government. Annual growth dropped to just 1.72%. "May Jobs Surprise after ADP Disappointment" reported on the non-seasonally adjusted (NSA)  full-time jobs gains and the NSA part-time job contraction. We saw SA FT job losses and SA PT job Gains. Unemployment ticked upward, both SA and NSA, while we recorded our second lowest NSA U-3 unemployment level since 1979. We also have the most May full-time jobs and the most combined May jobs on record.

The data was not all doom and gloom. The data was in the ballpark of possibilities. There were two singles, the ADP report and Jobs Report, and one triple, not a home run, with respect to the weekly claims report. One month does not make a trend. This was the data for the May ADP payroll report and the May Employment Situation Report. The next piece of data we will receive is the April JOLTS Job Opening and Labor Turnover Survey (JOLTS) data.  We should expect to see the most job openings, quits, separations, and hiring in the Education and Health Services (EHS,) Professional Business Services (PBS,) Trade Transportation and Utilities (TTU,) and the Leisure and Hospitality (LAH) sectors.  They don't draw pictures on the scorecard. Play Ball.