The May ADP Private Sector Payroll Report was a Disappointment

Normally after an ADP trough there is an ADP Bounce-back

The May ADP Private Sector Payroll report, as well as the May Non-Farm Payroll Report was a disappointment. The month to month ADP payroll growth was one of the weakest since 2010. The article "June ADP Should Bounce Back from Weak May" documented the yo-yo-like quality of the month to month growth. Last month we were "walking the dog." The month to month data was projecting at least 170,000 seasonally adjusted private sector jobs being created. All sectors except possibly IT were expected to grow month to month. The June to June data was projecting an even bigger month with a "minimum" growth rate of 1.92%, the same as last month, would yield 224,000 private sector jobs created. Natural Resources, Construction, Professional Business Services (PBS,) Leisure and Hospitality (LAH,), and Education and Health Services (EHS) were expected to report the largest growth rates. May was expected to be revised upward from its advance value, effectively borrowing growth from June

The June to June data revealed some more slowing while growing. The annual growth rate had been over 2.00%. It slowed last month to under 2.00% and dropped again to 1.82% this year. Back to back months of sub 0.10% month to month  growth will do that. The thing to note here is that June to June growth, by percentage terms, was best in Construction, PBS, EHS, and LAH. The four sectors with the most job openings as of the April JOLTS report were PBS, EHS, LAH and Trade, Transportation and Utilities (TTU.)

The Month to Month growth rate disappointed. Month to month growth rebounded from a measly 0.03% to a weak 0.08%. We have only been below 0.10% during June during June 2012 and June 2009 after the depths of the recession. We had contractions reported in Construction, Natural Resource and IT. Other services was flat.

Leisure and Hospitality only grew 0.02% month to month, according the the June ADP Report. Is this real or seasonally adjusted? We will find out on Friday. Construction and Mining and Logging contracted after back to back June increases (Month to Month.) Is this real or a problem with the seasonal factors? Could construction and LAH be experiencing labor constraints due to the immigration crisis? The ADP private sector data is only a part of the non-farm labor picture. Month of month the Government data should contract non-seasonally adjusted and grow seasonally adjusted. Will the Employment Statistics data come in over the 102,000 ADP payroll number? It should. 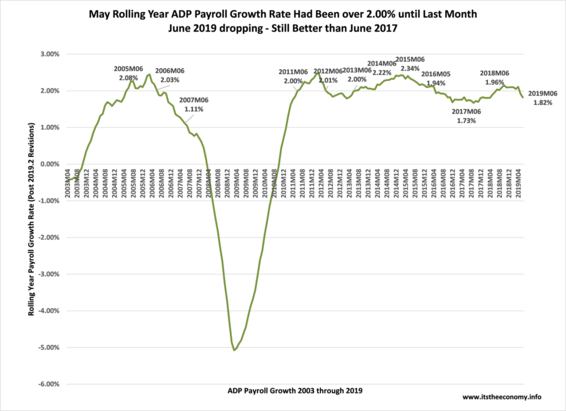 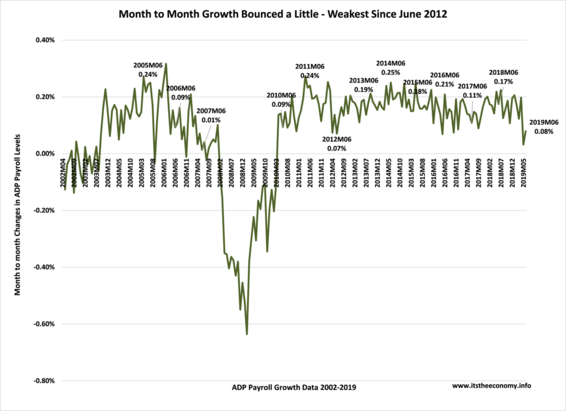