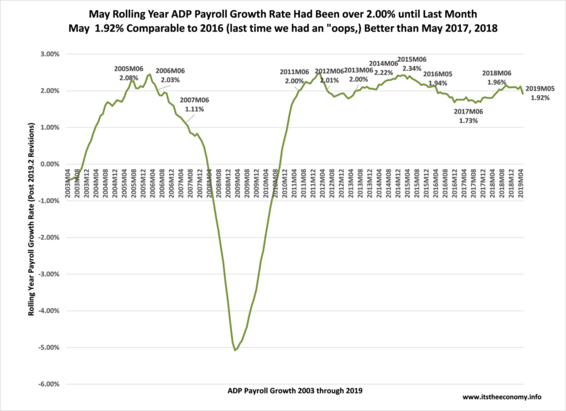 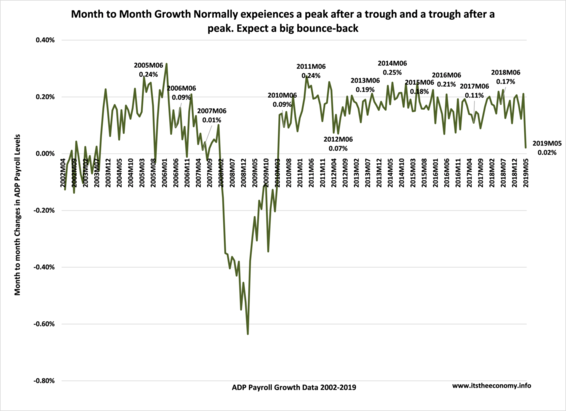 The May ADP Private Sector Payroll Report was a Disappointment

Normally after an ADP trough there is an ADP Bounce-back

The May ADP Private Sector Payroll report, as well as the May Non-Farm Payroll Report was a disappointment. The month to month ADP payroll growth was one of the weakest since 2010. The Private Sector Employment Situation data was better than May 2016, and that isn't saying much. Both the Month to month ADP data and the June to June Data are projecting a rebound.

The Month to Month growth is anticipating growth in the range of 170,000 to 270,000 seasonally adjusted private sector workers joining the economy. Normally we grow between 0.07% (2012) and 0.17% (2018) month to month during the month of June. We did contract by 0.02% during 2003. We also contracted during the Great Recession. All sectors, except Information (IT,) are expected to growth this month. The largest percentage growth is anticipated in Natural Resources (NR,) Leisure and Hospitality (LAH,) Professional Business Services (PBS,) and Construction. A bounce to last year's 0.17% would ease many minds that May 2019 was a "one off" month.

Last month the data disappointed. All sectors were expected to add jobs. That didn't happen. This month a bounce back is expected. We have a record level of Current Employment Survey (CES) Workers. The CES data is expected to growth non-seasonally adjusted through July before a minor, annual, drop and then a recovery and resurgence during the Christmas hiring season.  The CPS (Current Population Survey) data normally adds FT jobs through July and sometimes into August.  The CPS and CES data will be analyzed in the Employment Situation Forecast Article. Expect good news right before the July Fourth Holiday from the ADP data.