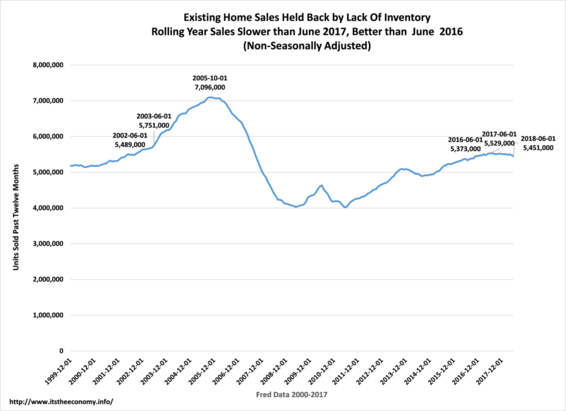 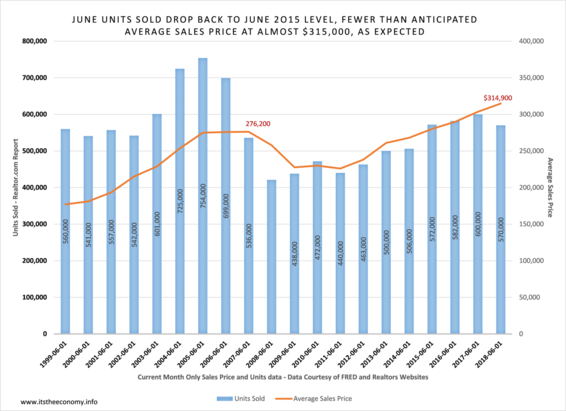 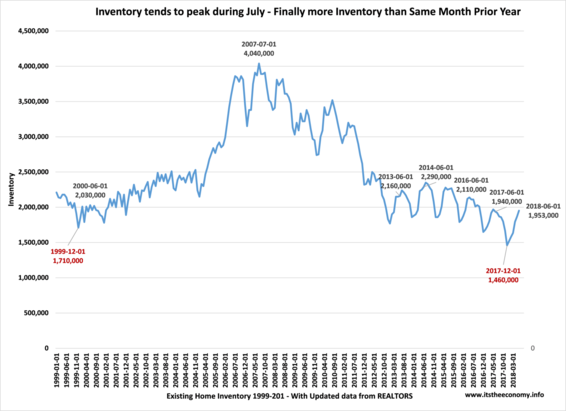 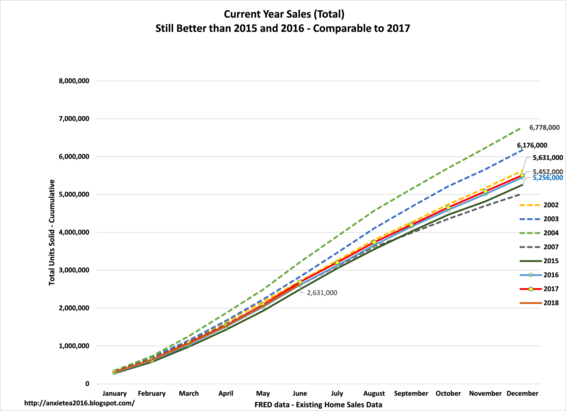 Inventory, the lack thereof, has held back existing home sales

Last week this column produced a June Real Estate Forecast article.  It was projected that compared to last June we would see the average sales price would rise, that inventory should improve from May to June, and that if there were enough buyers that units sold could poke through the 600,000 units level and that the average sales price could set a new record average sales price for the month of June, exceeding $300,000 and approaching $315,000. The main question was would we set another record low for existing home inventory. The data available only dates back to 1999. We should have inventory of more than 2 million units during a normal Summer. What happened this June? (All data is from the Realtors report and is quoted as existing home data which is co-ops, condominiums, and single family homes.)

Inventory Edged Higher, approaching 2 million units. Inventory tends to peak around July each year. People place their homes on the Market during February, March, April, and May with hopes to sell during the Summer and before Labor Day. We are up off the all-time low hit during December 2017. We say data rise month to month and June to June.

The Average Sales Price set a June Record at $314,900. This is good news. If anyone purchased a home since 2011 should be able to sell their homes for a profit. Sales vary by home style, neighborhood, school district, city, county and state. This is important because we saw the average sales price drop during 2007, 2008, and 2009. It took years for the average sales price to return to pre-recession levels. The 3.8% increase in the average sales price is comparable to what was reported in the CPI Inflation Report for June.

The Current Year Sales data is stronger than 2006 and weaker than 2017 through the first six months of the year. If you look at the current year sales graph you will see that we sold 5.45 million units during 2016 and 5.51 million units during 2017. If we split the difference we should sell 5.48 million units. This would be more units sold than were sold for the entire year for 1999, 2000, 2001, as well as 2007 through 2016. The data points to a relatively strong housing economy.

The Rolling Year, or lagging year, data indicates that we have sold 5.45 million units. This is roughly what was sold during 2016. We may be at an inflection point when the rolling year data equals the current year data. Remember that we have had a smaller inventory of homes from which to purchase. If inventory continues to grow then sales may swing a little higher on the rolling year data. We only have to sell more homes than we sold during July, August, September and the rest of the months remaining, to pull that rolling year number up a little bit. If we are really lagging last year's sales level by 120,000, the seasonally adjusted annual rate, then we would settle around 5.39 million. We will see how it ends up. The rolling year data is down 78,000 from last June. This puts the final 2018 number around 5.43 million units.

The June Real Estate Forecast article also examined the new construction and new home sales data. It was projected that we would see June to June increases in new construction starts, units under construction, completions, Inventory, Sales, and average sales price. Starts faltered a little from what was expected and are still doing better than last year after six months of data. Completions did much better during during this year than last year and  are lagging last year's level of completions. Where inventory has been contracting tear over year for existing home sales the new home sales inventory has been improving month to month and year to year.New home sales should improve, the average sales price should break the 300,000 level, and units sold should be better than last June, even though the non-seasonally adjusted data could drop from the May level.

The data is the data.  We should sell 5.4 million units or more this year. Jobs are up. Earnings are up. Confidence is up. This was a steep recession. The existing home data does not go back to a time where we were near the 4 million level. There will ups, downs, and pauses  along the way to 6 million units sold.