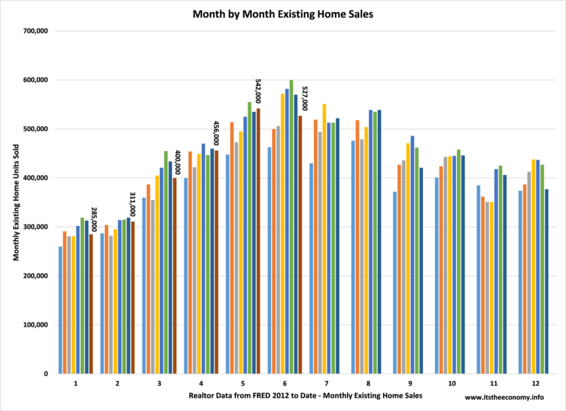 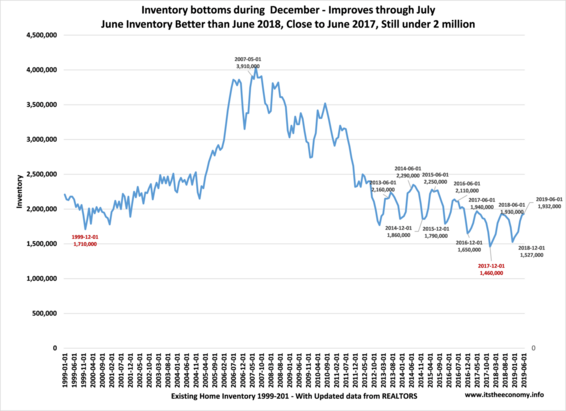 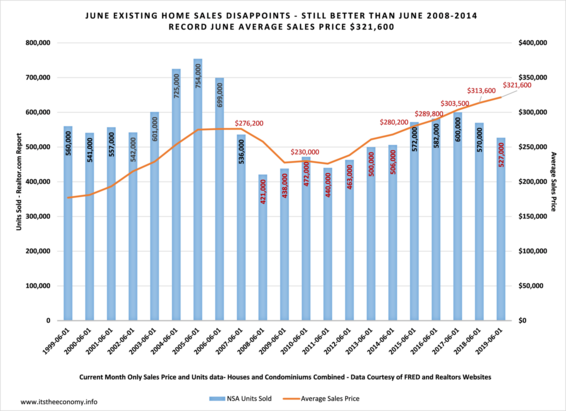 There is a basic understanding that you cannot sell imaginary inventory. We had an overabundance of existing home inventory during 2007-2013. Alarm bells were ringing of historical low inventory levels during December of 2015, 2015, and 2017. Now that inventory levels are rising sales can "return to normal." June is historically the busiest month for existing home sales. What was recorded and what was reported this June?

Inventory levels have been rising and that is a good thing. There can be too much of a good thing and too little of a necessity. We had "too many" homes for sale between 2006 and 2012. When supply is high and demand cannot reduce supply prices fall. The same is true in real estate. The lack of inventory during 2015, 2016, 2017, and even 2018 and 2019 is the best kept secret that everyone should know. This month the inventory level.edged higher to 1.932 million units. The inventory for condominiums rose by 12,000 from last June while the existing home inventory fell by 10,000 compared to last June.

June Units Sold was a miss. Combined Single Family and Condominium Sales were expected to approach 580,000 units, non-seasonally adjusted. Only 55,000 condominiums and 472,000 single family homes were sold this June, or a total of 527,000 units. This is the fewest June units sold since June 2014. The other side of that story is that this is more than was sold during month of June from June 2008 through June 2014.

All real estate is  local. What would buy a parking space in Manhattan might by a four bedroom 2.5 Bath home somewhere else.Real estate markets differ by state, county, municipality, school district, neighborhood, style and age of the real estate. Condominiums are different from houses. It is, and never has been, "Location, Location, Location." It is "Location, Condition, and Motivation." An unmotivated buyer will not buy a home, at any price. A too well motivated buyer may overpay while a over-motivated seller may sell at "too low" of a price. An unmotivated seller will "wait" for a "better offer" which normally is a worse offer.  Contact a REALTOR to find out what your home is worth and what homes are available in your market. This is a report based on national data and may not be transferable to your market where there may be an oversupply of homes.

Homes are bought and sold every month of the year. Inventory is required to make sales. We normally have 2 million units, or more, available every month of every year. This was what was normal between  2000 and 2012. A "healthy" inventory appears to be between 2.0 and 2.5 million units. The inventory trend is a rising trend. The average sales price trend is a rising trend. Sales are still sluggish.  It may be counterintuitive, yet, it is possible that we need interest rates to rise to spur sellers to sell and in order to get buyers to buy. The motivation to buy or sell does not to be very pressing with a nearly historic low thirty year mortgage rate.