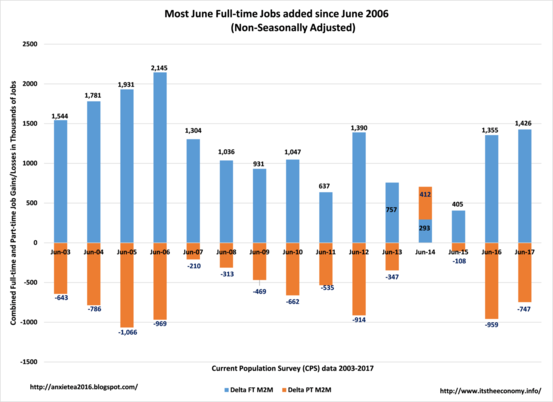 Jobs Report Friday is an important day for the stock market and for the economy. The headline number is either the seasonally adjusted private sector "jobs" number or the seasonally adjusted "non-farm payroll" number. The number quoted comes from the Current Employment Statistics (CES) data and measures the number of workers gained or lost each month. This number can double count people who are working two jobs.A second number that receives headlines is the unemployment rate. The U-3 Unemployment rate comes from the Current Population Survey data. The CPS data includes information on full-time jobs and part-time jobs as well as the number of unemployed people and the number of people in the workforce population..We have to watch the revisions to the prior months data. plural. The CES data has advance, preliminary, and "final" versions. Sometimes the final data is revised months or years later. If the data from last month is revised down, this will give a lower starting point and a big bump this month. Conversely, if the May data is revised upward then the current month's data is muted. It is best to compare the data from the current value and the trend values, not just one or the other.

The Private Sector Worker number recorded  a jump of 1.01 million workers and reported a jump of 187,000 workers. The Difference between what was recorded and what was reported is the difference between the non-seasonally adjusted data and the seasonally adjusted data. The May data was revised higher by 33,000 workers so this means that the NSA CES data could have been reported at 220,000. The Seasonal factors were within the expected range so the seasonal data was roughly where it should have been. Another piece of good news is that this growth rate was comparable to the June growth rates of 2004 and 2006. Remember that the CPS Jobs market peaked during July 2007. We could have three or more years of growth ahead of us.

The Private Sector Jobs data revealed that we added more Part-time Jobs during this June than we did in any of the Junes from 2007 through and including 2016. This is why we need to look at both the real data changes and the growth rate. We have a larger base so we need more jobs to grow at the same rate of change as prior years.We added 1.4 million full-time jobs and shed 747,000 part-time jobs. This data was better than last year in real terms. We  gained more full-time jobs and lost fewer part-time jobs than last year.

Unemployment Level - Up is Down. The Unemployment level spiked higher, as forecast in the column "Jumping June Jobs Report Potential." This is the lowest real unemployment rate for the month of June since June 2001 when it was 6.85M. This level is will probably tick higher next month before it falls.

There are a number of other ways to look at the data: 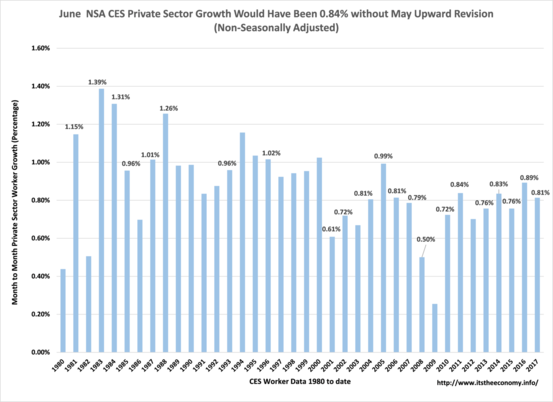 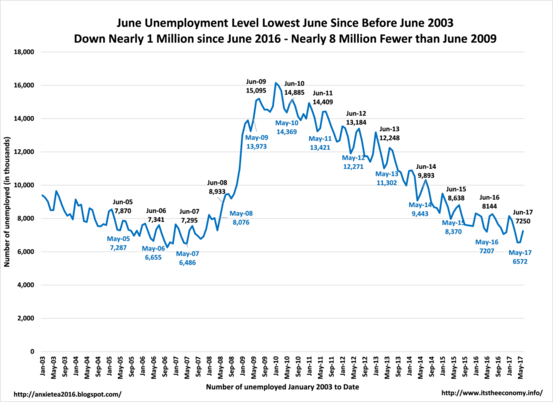 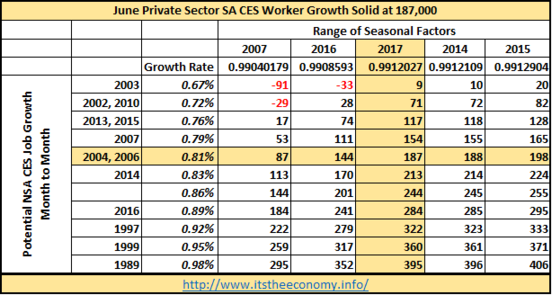