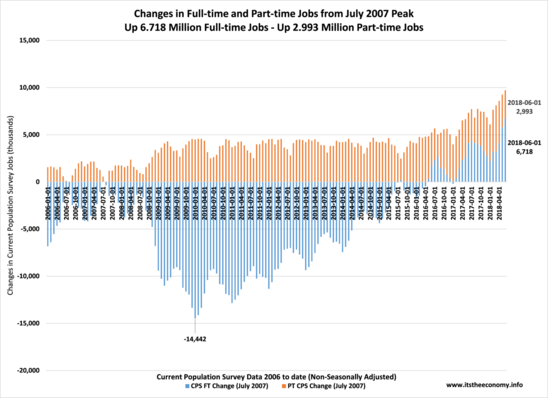 Some of Junior's Friends Cannot Find Jobs - Pop-Pop Can

The June Jobs Report caught some people off-guard. The Current Employment Statistics (CES) worker data showed a huge spike in non-seasonally adjusted (NSA)workers. The Current Population Survey (CPS) data, NSA, recorded a huge spike in full-time jobs, a significant drop in part-time jobs, and a massive spike in U3 unemployed workers.  The unemployment rate edged higher as more people re-entered the job market. The CPS survey respondents were basically answering that they were looking for work and unable to find it. So far this column has published the following articles:

Not all jobs are created equally. We saw a huge spike in full-time jobs this month. We saw wages surge in sectors where employment had been trailing in recovery. President Trump is seeing job growth not seen since Bill Clinton, and it is in full-time job growth. Our workforce has been aging since the recession. What happened this June?

Not all jobs are created equally. Junior may not be able to find a job. Mom and dad may be having a difficult time finding a job. Grama and Gramps may be working in their twilight years. This was a great jobs report. There are some items that jumped off the pages in all of the analysis articles. Men are working more dual full-time jobs. Women are working more dual part-tie jobs. "Dirty fingernail" jobs are paying more money and are seeing continued strengthening. Wages are up. Workers are up. Also, when the June JOLTS Report is released, remember that comparing job openings to unemployed workers, especially when not factoring in participation rates, is specious.

Unemployment, while at near historic lows, is higher for those 55 and older than it was during June 2006. Even after a solid month of hiring for those under the age of 25, the level of unemployment for those 20-24 is comparable to June 2006. An interesting phenomenon of the Great Recession is that in addition to a graying of the workforce there has been a graying of the unemployed worker.Unemployment among those over the age of 70 has declined since June 2017.