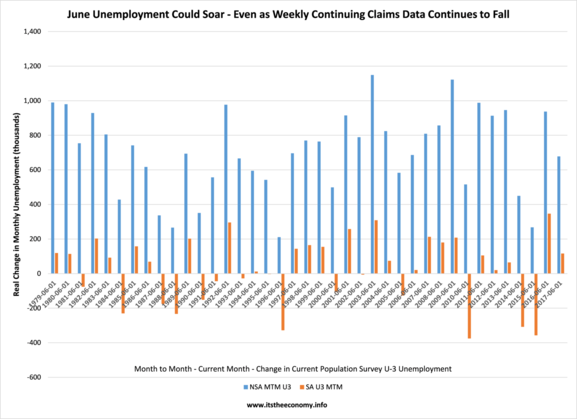 We are expecting workers to surge during June. Could Full-time jobs jump by 900,000 or 1 million or 1.1 million full-time jobs this month, non-seasonally adjusted? Yes. Could we lose 600,000 or 700,000 or 800,000 part-time jobs this June? Yes. Is it possible that even as we add nearly a million non-seasonally adjusted CES workers that we could lose net jobs?  Yes. The two data sets are different sizes and measure different things. The Current Population Survey (CPS) data, or Household data, measure jobs, the Current Employment Statistics (CES) data or Establishment Data, measures workers. It is possible, as happened during 2012, 2016, and 2017, that we could lose net jobs. The Jobs streak is an Economic Urban Legend. President Obama's "Job Streak" was a "worker" streak, and was a seasonally adjusted worker streak.

The Seasonally Adjusted Jobs Data could go negative during June - This is "Normal." The Jobs streak would never have been created if they used the SA CPS data instead of the SA CES Private Sector Worker Data. It also would not have happened if they hadn't massaged the seasonal factors. It is easier to massage the data than to change the message. The SA Combined jobs data was negative during June. 2011. 2013, 2015 and 2016

The Seasonally Adjusted Unemployment data could rise, as well. There were some individuals claiming that the historically low level of unemployment, rate and real numbers, could stay at last month's level. The NSA U-3 would have to rise by fewer than 450,000 people in order for the SA U3 value to fall.

The devil is in the data. These regular swings in employment and unemployment is why the "official" jobs report data is the seasonally adjusted data. How could you explain CES worker gains and CPS job losses? How could you explain away declining weekly unemployment claims and an increasing number of unemployed workers? The takeaway here is that NSA Workers will rise,  NSA U-3 Unemployment will Rise, We should see a spike in Seasonal FT Jobs, we could see an uptick in NSA PT jobs, although that number should decline as PT jobs are temporarily upgraded to FT jobs and as some people hire new Summer workers. People who can't find work, who may not have had work recently, will say that they are looking for work and unable to find work.

More analysis will come after the report is released. The increase in "all sectors" mean that Men should continue to increase their full-time job numbers. Women should also see FT and PT jobs improve.  This will be analyzed after the data is released on Friday. The preliminary look at the multiple job holder data is that we should see a drop in multiple job workers, a drop in dual part-time workers, and a decrease in workers who work a FT and a PT job,  and while we see a spike in the number of FT FT workers. Another topic that will be addressed is the wage growth that is expected to continue. The Average weekly wage should continue to improve as people work more full-time jobs. This point is being missed by most observers.  The growth in hourly rates, in part due to supply and demand and in part due to changes in the minimum wages in various states,  and the growth in hours worked, mean higher earnings should be recorded.  Also, we are seeing growth in Manufacturing Jobs, Mining/Logging Jobs, Construction Jobs, and Professional Business Services Jobs, four of the highest paying CES sectors. The effects are multiplied. We should see more wage inflation. How is President Trump doing compared to his predecessors? That will be addressed in the "Five Presidents" series. We know that he has added more full-time jobs than any of his predecessors at the same point in their Presidencies, and he should add more full-time jobs. 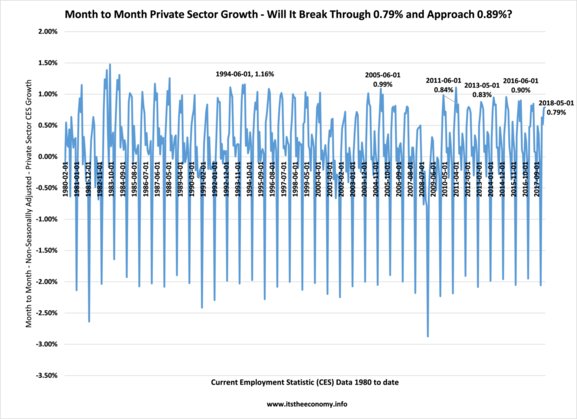 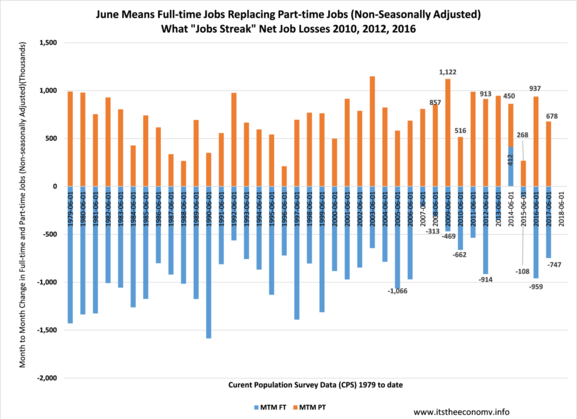 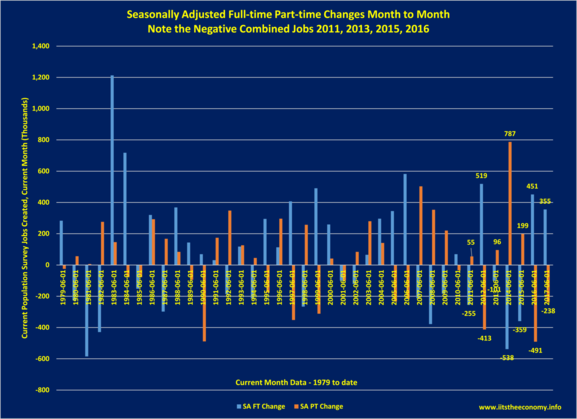 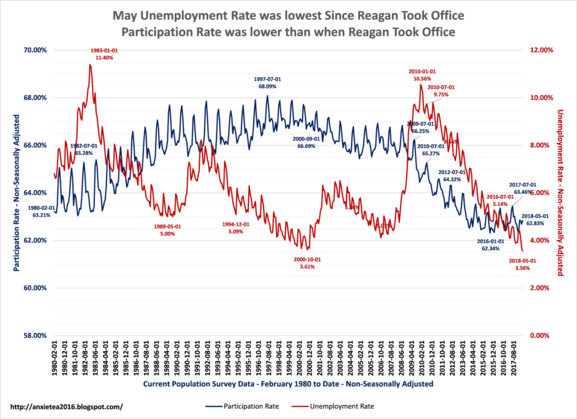 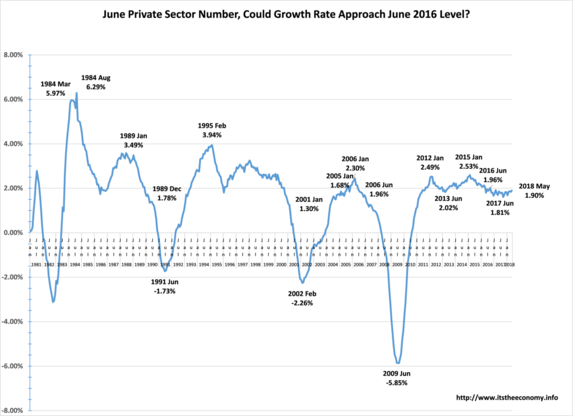 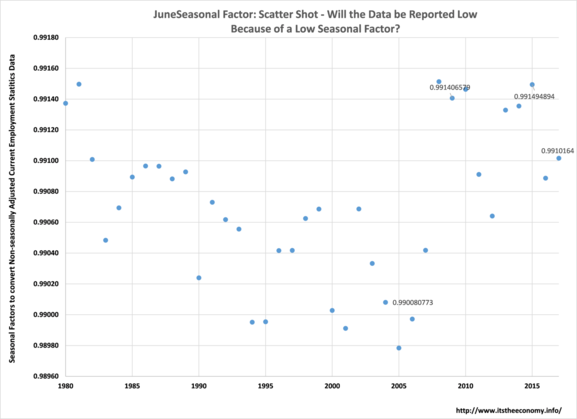 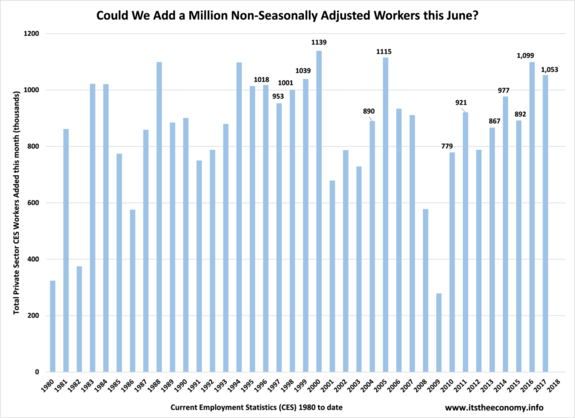 June Jobs Report Should Provide Some Fireworks this Friday

The monthly jobs report, or employment situation report, is the "most anticipated" monthly data that is released. It is released on the Friday following the ADP report release, and it is normally the first Friday of the Month. The "Jobs Report" uses two data sets, the Current Population Survey (CPS) data and the Current Employment Statistics (CES) data. The CPS data measures the workforce population, the number of full-time and part-time jobs, and the number of unemployed workers, The CES data measures the number of workers. Both data sets have seasonally adjusted and non-seasonally adjusted components. The seasonal factors used to convert the NSA data to the SA data change from data set to data set, category to category, month to month, and year to year. The CES data is revised every month. An upward revision to the prior months dta, multiple revisions will lower the current data if the prior data is revised higher and will report the data higher if the prior data is revised lower.  The ADP data and the CES data underwent significant revisions this year, as was referenced in the "ADP Payroll Forecast: June Jumping Higher for All?" Tth the he data from 2015, 2016, and 2017 for both the ADP Payroll data and the CES data were massively revised after the first of this year. They borrowed from 2018 to boost the 2016 and 2017 data. We need to watch the growth rates and the seasonal factors used this month.

The monthly growth rate has been fairly consistent  during the month of June. The growth rate swings wildly from a -2.00% drop during January to a gain of nearly 1.00% during April or June of most years. The "peak" monthly growth often happens during wither April or June, as employers ramp up for Memorial Day or the Fourth of July. Will we see a monthly growth with am "0.8" in front of it? Possibly. Where will this growth rate hit when combined with the season factor? The probability here is that we will fall  somewhere around 0.85% and the SA CES will fall between 192,000 and 311,000. There is significant overlap between 240,000 to 280,000 so anticipate a number around 250,000.

Watch the revisions. If the data from last month is revised higher by 25,000 then this month will be "lowered" by 25,000. The same is true in reverse. Watch the difference between the non-farm payroll number and the private sector worker number. 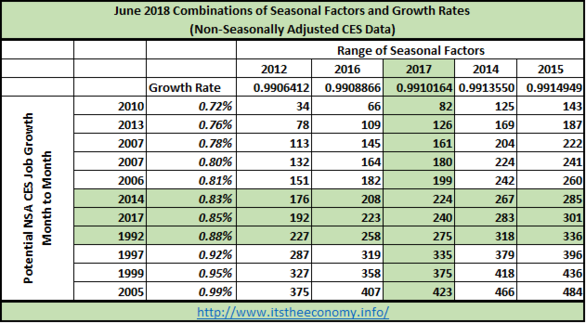 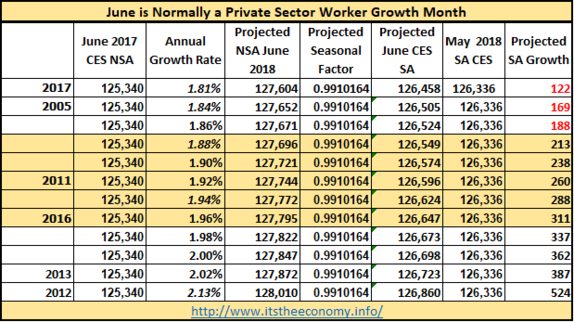