The May Employment Situation Report Showed Some Weakness

The June Report Should Rebound - Could Be Best June Ever

The May Jobs Report, or Employment Situation Report, was a disappointment with regard to both the Current Employment Statistics (CES) worker data and with regard to the Current Population Survey (CPS) Jobs and Unemployment Data. We were growing at over 2% annually, according to the Non-Seasonally Adjusted (NSA) CES data, between October 2018 and January 2019. Last Month we recorded the most full-time jobs ever, per the CPS data. We had the lowest May U-3 Unemployment Level, NSA, since May 1979. What can we expect from the two data sets this month?

June to June Growth Should be Recorded in all Sectors, Including Information Technology.The Largest non-seasonally adjusted June to June growth rates, in percentage terms, should be in Mining and Logging (M/L,) Construction, Leisure and Hospitality (LAH,) Professional Business Services (PBS,) and Education and Health Services (EHS.)

June to June Seasonally Adjusted Growth should be reported in all sectors. The seasonal factors used change the order of the sectors that should see the largest growth. Mining and Logging, Construction, PBS, Manufacturing and EHS should grow the fastest compared to last June.

May to June growth, non-seasonally adjusted should be much better than May - adding over 1 million non-seasonally adjusted private sector workers. All sectors, including IT, should grow June to June. The largest gains are expected in M/L, Construction, LAH, PBS, and EHS. June is a strong hiring month. We should well exceed the 0.72% recorded during May. We should grow 0.80% to 0.90%. The month to month growth is projecting a slower addition of workers, coming  between 87,000 and 202,000 workers. This range overlaps entirely with  the annual growth projections. Normally this means that the data will come in on the low side because the month to month growth impacts the annual growth rate and the annual growth rate has been dropping since January. The best bet is that the SA CES private Sector data will come in between 150,000 and 202,000 workers, depending upon the seasonal factor(s.)

Seasonally Adjusted CES worker should report a drop in Government Workers, possible drops in Mining and Logging, Other Service, and IT. We should see the strongest percentage growth in M/L, EHS, PBS, Manufacturing and LAH.

Watch the revisions. The non-farm payroll datarevision tables  are readily available. It appears that there should be a modest upward revision between 8,000 and 21,000 non-farm payroll workers, including Government Sector workers. Remember that when the May 2016 data was released the April data was revised down 37,000 workers so that the May data could reported a gain of 38,000 workers. Last month the headline SA NFP number was 75,000. If this is revised up to 96,000 then a potential 200,000 headline private sector number might be reduced to 179,000.

We have been climbing a jobs mountain. Normally we hit peak jobs during July, and sometimes it comes closes or exceeds the July data during the Christmas Holiday Hiring Push. We had a record level of combined full-time and part-time jobs this May. "All" recession are jobs recessions. June is traditionally a month where full-time jobs are added and part-time jobs are trimmed. Unemployment can tick higher as people respond to the CPS survey question saying that they are out of work and looking for work. What can we expect this month?

What does this mean for the rest of the data? If workers grow as much as anticipated,  and wages grow in excess of 3%, we could see record June wages across the board and record June Income. Record June income should mean a boost in retail sales and a boost to the 3rd month of the Second quarter GDP. Worker and wage data will be covered in an individual column.

Men and Women should see record levels of jobs this month and next month. The spike in Construction, mining and logging, and manufacturing jobs will traditionally boost more men than women. Men work more full-time jobs and more dual full-time jobs than women. Women work more part-time jobs and more dual part-time jobs than men. This could negatively impact the number of women working in the workforce. Men and women work a comparable number of FT PT jobs. This will be covered in a separate article.

Could we see a drop in Job Openings reported for the month of May? June? May was weak. Job opening may rise because so few workers were hired. Remember that the JOLTS job openings data is a different survey than the CES worker data and that it lags the Jobs Report by one month. The JOLTS data is not comparable to the CPS jobs and unemployment data. No matter what you hear or read the JOLTS Job Openings data  and the CPS U-3 unemployment data have no relationship. Zero. It doesn't matter if we have more job openings than unemployed workers. The JOLTS data does not have any information on full-time or part-time jobs.

This jobs report should be a solid jobs report. We should see Annual improvement in Workers, Jobs, and Unemployment. We should see growth. The question is how will it be received? There will be some confused by the boost in participation with "relatively weak" "jobs" data. The Jobs data will be stronger. The workers data will be strong and reported as not so strong. We will continue climbing the non-seasonally adjusted jobs mountain this month. 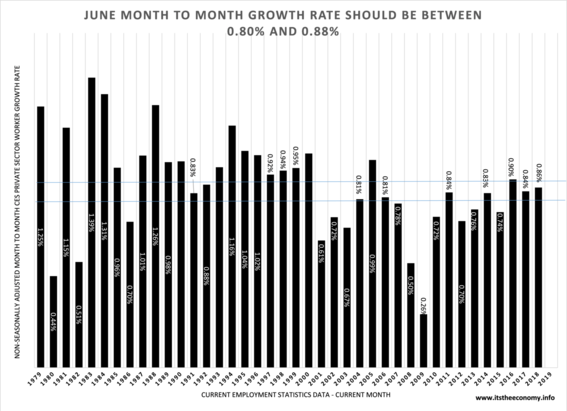 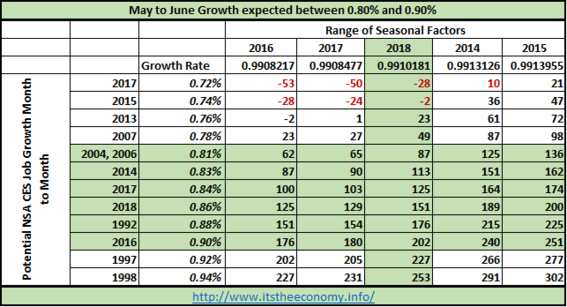 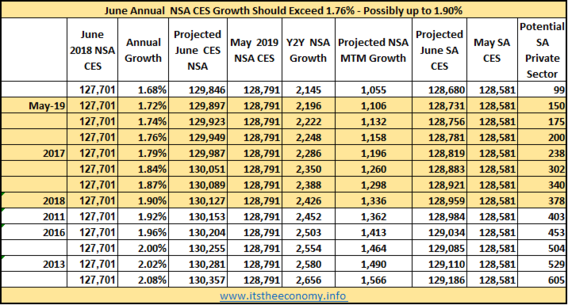 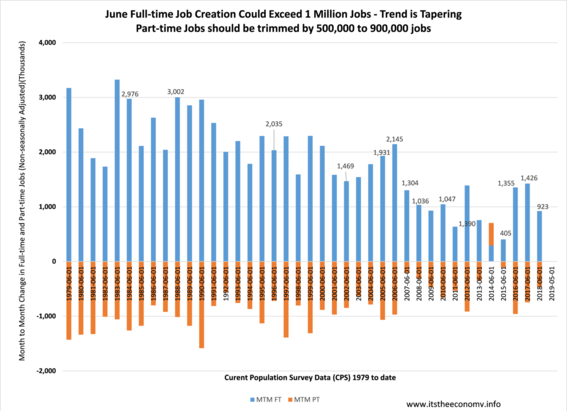 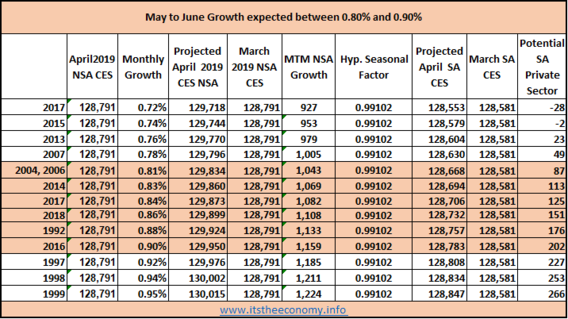 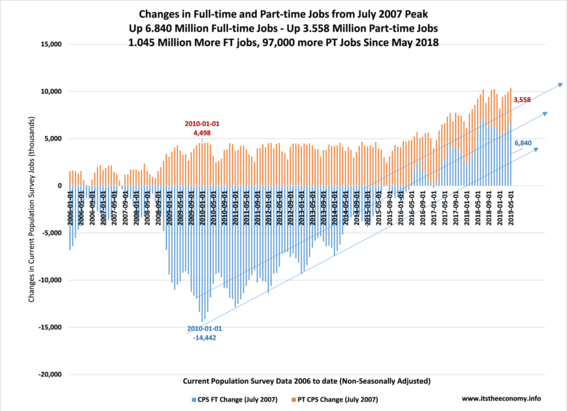 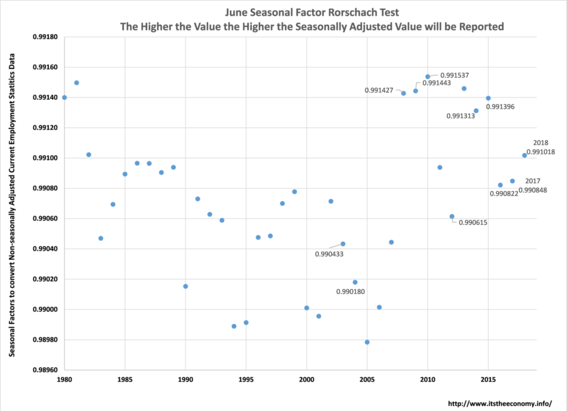 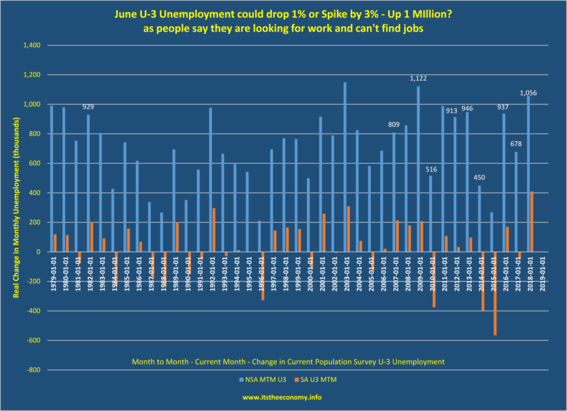 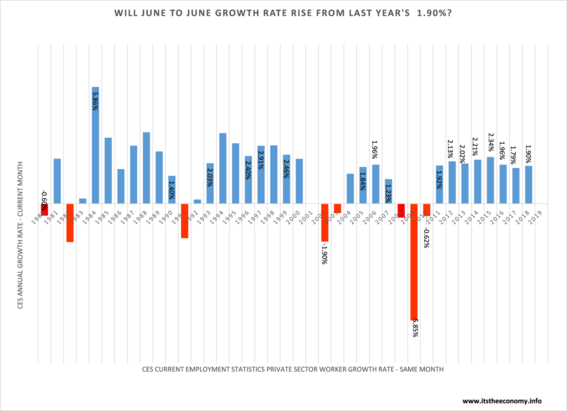