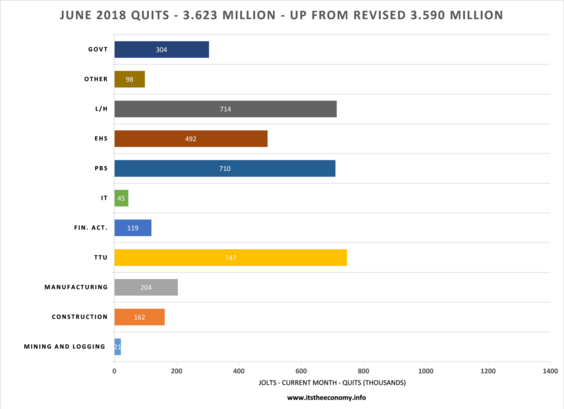 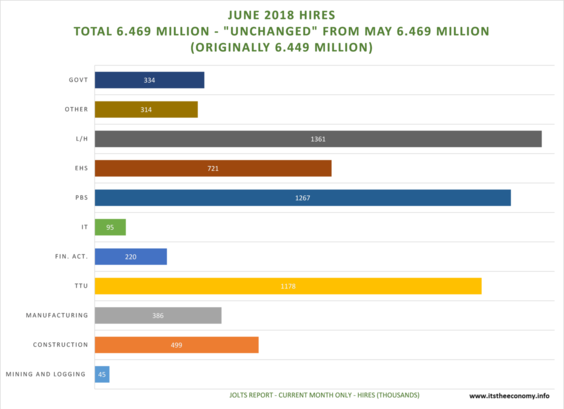 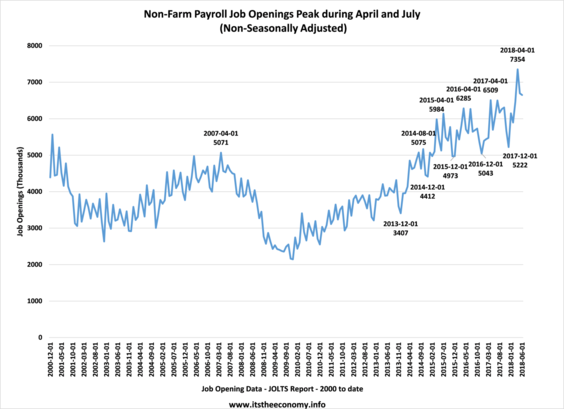 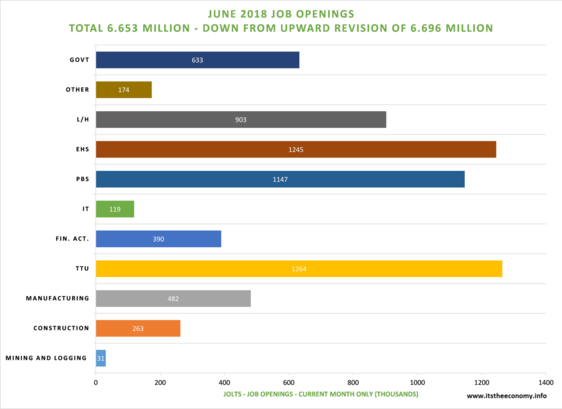 Last week we received the July Jobs Report, also known as the Employment Situation Report. The Jobs Report is created using the Current Population Survey (CPS) Data set and the Current Employment Situation Report (CES) data set. The CPS data includes information on unemployed workers. This unemployment data is different from the Weekly Unemployment Claims data on unemployment. The weekly claims data measures those who had jobs, lost jobs, are looking for jobs, and had a job that provided unemployment claims benefits. The U-3 data from the CPS data is people who are out of work who are actively looking for work. Another data set is the JOLTS (Job Opening and Labor Turnover Survey) data set. It measures "Hires and Fires," as well as quits and job openings. The three data sets are of different sizes and accuracy. Let's also not confuse the ADP Payroll data with the CES worker data or the CPS jobs data. The CES data tells us which sectors are doing well and which are not. The CPS data tells us if there are full-time jobs being created or part-time jobs being created, it doesn't say which sector is creating these jobs. Likewise, the JOLTS data tells us which sectors, and which regions of the country, are seeing changes in job openings, quits, separations. The disparity between the surveys mean that Job Openings have nothing to do with Job Openings. We do not have "negative unemployment" where there are more job openings than unemployed workers. We have a failure to participate.

The June Jobs Report caught some people off-guard. The Current Employment Statistics (CES) worker data showed a huge spike in non-seasonally adjusted (NSA)workers. The Current Population Survey (CPS) data, NSA, recorded a huge spike in full-time jobs, a significant drop in part-time jobs, and a massive spike in U3 unemployed workers.  The unemployment rate edged higher as more people re-entered the job market. The CPS survey respondents were basically answering that they were looking for work and unable to find it. So far this column has published the following articles:

The net take-away was that the economy was doing better than some people thought was possible. The May and June data for seasonally adjusted (SA) CES worker growth has been revised higher than last reported for both May and June. What can we learn from the June JOLTS Report?

Job Openings are Off the All-time peak, still at a record high for June.  The private job openings level dropped from 6.091 million to 6.020 million. The non-farm payroll job openings dropped from 6.696 million to 6.653 million. If you look at the accompanying graphs, the largest level of job openings are Trade, Transportation, Utilities (TTU,) Education Health Services (EHS,) Leisure and Hospitality (LAH,) and Professional Business Services. The TTU sector, L:AH sector, and EHS sector have three of the four lowest weekly wages levels for June.  These same three sectors have three of the fur largest worker levels, with Professional Business Services being the third largest sector.

The four sectors with the most job openings had the most hires. The May hire level was revised higher by 20,000 workers this month. LAH, PBS, TTU and EHS had the largest level of hires during June. The LAH spike is a Summertime event.

The same four sectors had the highest quits. Another number that receives attention elsewhere is the "Quits" level. An elevated "quits" level is supposed to indicate consumer/employee confidence. TTU, LAH, PBS, and EHS have the four highest levels of quits. Again, the lowest wage sector is LAH. Wages and quits and job openings go hand in hand.

What will happen next month with quits and hires? The June data had the non-seasonally adjusted average weekly wage jumped 3.86% for LAH, 3.34% for EHS, 2.95% for PBS, and 2,57% for TTU. The July data was 3.36% for LAH, 3.21% for PBS, 2.58% for EHS, and 2.30% for TTU. The reason you are not hearing these points is because others report on the seasonally adjusted wage data and the seasonally adjusted worker data. Wages, in total, are increasing roughly 3% a year. This is the nominal rate. You will hear some argue that we need to look at the nominal rate of inflation. The nominal rate of inflation is less than 3%. The question is can you trust all of the seasonal adjustments of the CPI data? This column has written numerous article on the commodity deflation, services inflation situation.

The JOLTS data tends to get over-hyped or under-reported. The Job Opening data trails the jobs report data by five weeks. Last week we received the Jobs Report data for July and today we received the JOLTS report for June. We do not know if these job openings are full-time or part-time jobs. What is missing from most discussions is that the lowest paying jobs, as a rule, have the highest quits and the highest job openings. Three of the highest paying sectors, Construction, Mining and Logging, and Manufacturing have the lowest quits. Can we expect higher wages in the lower wage paying sectors? Possibly. When we see wage increase in these sectors then we may see quits drop, job openings drop, and hires improve.