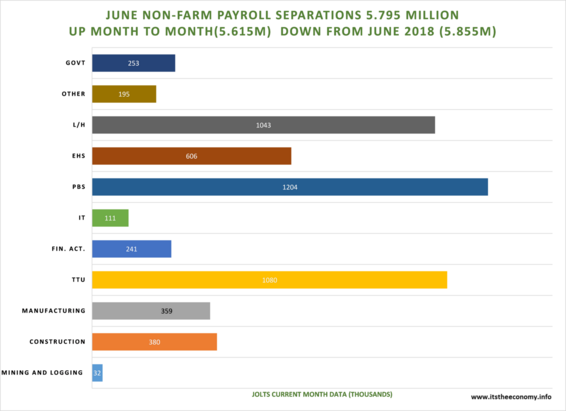 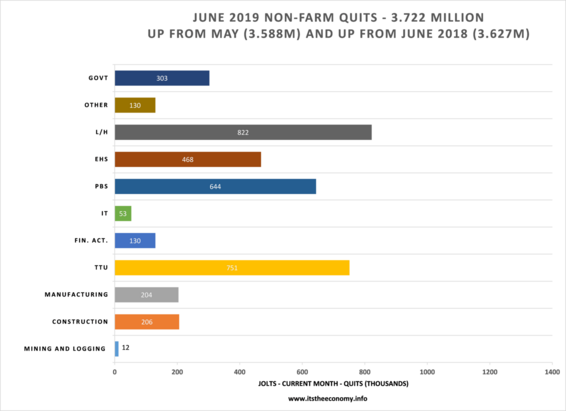 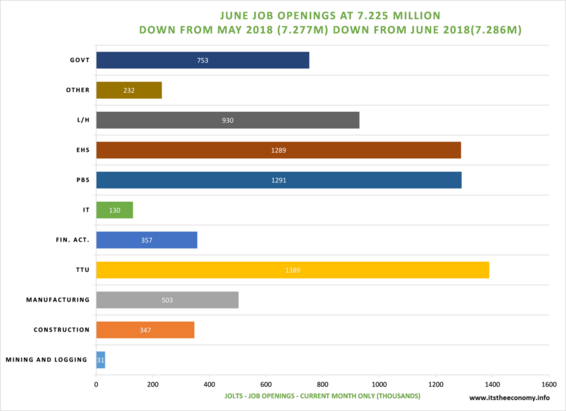 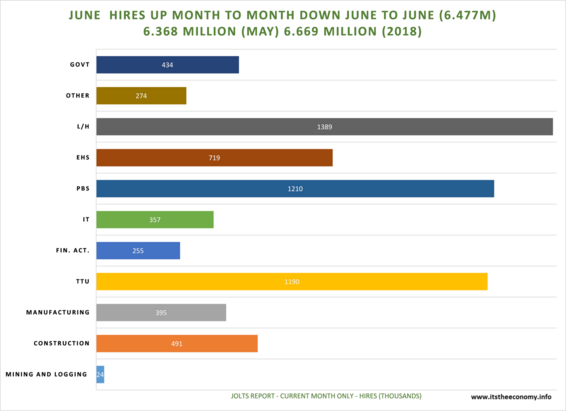 We have seen record, or near record levels of of job openings and quits during the past few months. The records were either for the same month data or the all-time data. What was recorded om the non-seasonally adjusted data this month?

Job Openings dropped from month to month and June to June. There were 7.225 million job openings this month compared to 7.286 million last June and down from 7.277 million jobs last month. There are some concerns as to whether or not we want to set records for Job Openings. The most job openings are in Trade, Transportation, and Utilities (TTU,) Education and Health Services (EHS,) Professional Business Services (PBS,) and Leisure and Hospitality (LAH.)

Hires were up month to month and down from June 2018. There were 6.477 million hires during June, up from 6.368 million during May and down from last June when we had 6.669 million hires. This does not match what you read in the news because we are constantly hiring and either quitting or separating from our employers. The difference between hires and separations are the net worker gains for the month (CES data.) The sectors with the most hires were the same as those with the most job openings: LAH, PBS, TTU and EHS. Same sectors, different order.

Separations were up month to month and down June to June. The June separations last year were 5.855 million. Last month the separations were at 5.615 million) This June we were at 5.795 million workers. Hires exceeded separations. The largest sectors for separations were PBS, TTU, LAH, and EHS.  Similar to the hiring and job opening orders and yet different. The trend is still generally higher.

June Quits were up month to month and June to June. People are quitting because they can find better jobs or better wages elsewhere, possibly in different sectors. Quits came in at 3.722 million compared to 3.588 million last month and 3.627 million last June. Quits were highest in LAH (the lowest weekly wage sector,) TTU, PBS, and EHS. EHS and TTU are also among the bottom four for average weekly wages.

It is very possible that if people examined the non-seasonally adjusted data that they would see good news, as well. Last week we received great data on the non-seasonally adjusted (NSA) first-time unemployment (FTU) claims data, the continuing claims data, and the Insured unemployment rate. We had our eleventh week of NSA FTU under 200,000 claims. It used to be considered good news when the seasonally adjusted FTU was under 300,000 claims. We had the lowest ever NSA FTU claims level for the fourth week of July while having the most covered insured ever. This is a big deal.

Don't worry about the "inverted yield curve." All recessions are jobs recessions. The inverted yield curve is indicating that we are the best game in town. When foreign investors, or domestic investors, buy US Bonds the price increase and the yield decreases. There are counties in the world selling bonds with negative yields. Would you rather pay for a government to keep you money or earn a small return on your investment? People hanging their hat on a an inverted yield curve projecting a recession are ignoring all the other data.

Don't conflate Job Openings with Unemployed workers or Continuing Unemployment Claims data. The data used for unemployed workers is from the Current Population Survey Data (CPS.) The headline worker data is from the Current Employment Statistics Survey (CES) Data. The JOLTS data is comparable to, and still different from, the CES data. The weekly claims data is yet another different data set. All of these data sets have seasonally adjusted (SA) and NSA data components. The seasonal factors used to convert the NSA data to SA data change by data set, by month, by year. Is the data raw (NSA) or ripe (SA.) Are you comparing An Apple (CPS,) with an Orange (CES,) with a Grapefruit (JOLTS,) or a pear (Weekly Claims?) That is how different these data sets are when compared to one another.

The surprises this month were that June Quits jumped, while total Separations, Hires, and Job Openings fell from their June 2018 levels, We still have near hstoric high levels of June Job Openings. The trend is higher through October.