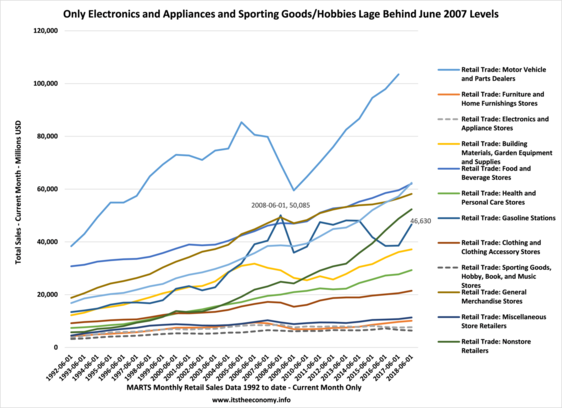 Another Record Month of Retail SAles

Last month there were considerable data revisions with the release of the May MARTS Retail Report.  The revisions were supposed to be limited in nature. The revisions were for all of the data from 2008 through April of 2017. There were revisions to the Sporting Goods, Hobbies and Books (SGHB)  data and the Electronics and Appliances (EA) data going back to 1992. There were notable revisions to the data from 2009 through April 2017. The revisions to the data means that 2016 was "better than originally reported" and that the starting point for 2017 was revised lower. It is curious to note that, for the most part, the EA data and the SGHB data were revised much lower during 2015 and 2016.The June MARTS forecast article Projected month to month growth only in the Gasoline and Hobby Sectors and June 2018 growth versus June 2017 in all sectors except EA and SGHB. It also projected a possible rolling year growth rate approaching 5.00%. There has been a considerable amount of discussion elsewhere that we have been in a Retail Ice Age. This column has written numerous articles stating that we are in a Retail Renaissance.  We have not seen the true value of the Retail Renaissance reflected in the Gross Domestic Product Data. How is the Renaissance this month? Will it be reflected in the Advanced Second Quarter GDP data later this month? What was reported, what was recorded in the June MARTS report?

We saw June to June  Sales Growth in all Sectors excluding Sporting Goods/Hobby. This was expected.  Gasoline Sales spiked the most, followed by Non-Store Retail and Miscellaneous Store Sales.

We saw May to June Sales drop in all sectors, non-seasonally adjusted. There was some thought that the Sporting Goods number would improve. They did not improve. This is not a surprise, nor should it cause any concern.

The Annual Growth rate soared, however you measure it. June only sales grew by 6.27%. The Current Year (CY) data grew by 5.45%. The Rolling Year (RY) data, the past twelve months, grew by 5.05%. The situation where the CY data is greater than the RY data means that the economy is growing. This can be seen in the RY graph.The Current Month data is even greater than the two of them.

The only laggards, compared to June 2007, are electronics and appliances and SGHB. They are the two smallest retail sectors. These two sectors saw systematic revisions with the release of the May data. Note in the Current Month line graph that gasoline sales has not returned to the level recorded during June 2008. The gasoline sales for June 2018 were also lower than June 2011, June 2012, June 2013, and June 2014. Where are the stories regarding "Gasoline Stimulus Money" right now?

We saw huge upward revisions to the May data. This should be receiving more n notice. Every sector revised its data higher for a combined upward revision of over 3 billion dollars. Yes, the data for April was revised lower.  WE are still up 2.5 billion in sales from where we were this time last month, and to that we added the spike in June sales which was 30 billion dollars higher this June than last June.

The data was great. The report was buried by the discussions in Russia between President Trump and President Putin. This data means that the GDP should soar for the second quarter of 2018. 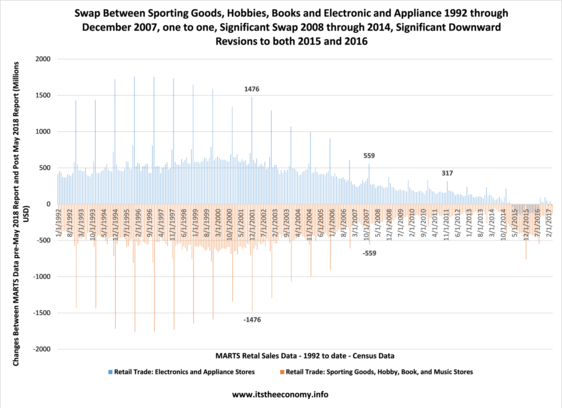 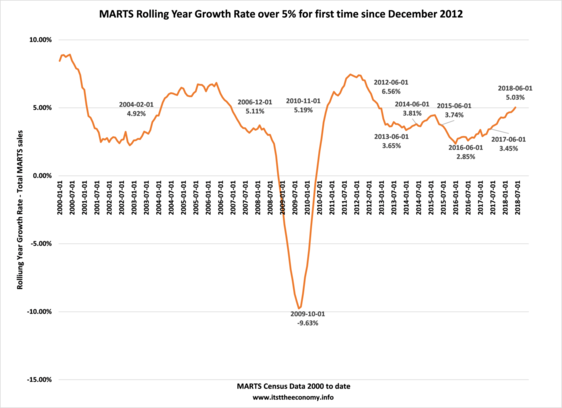