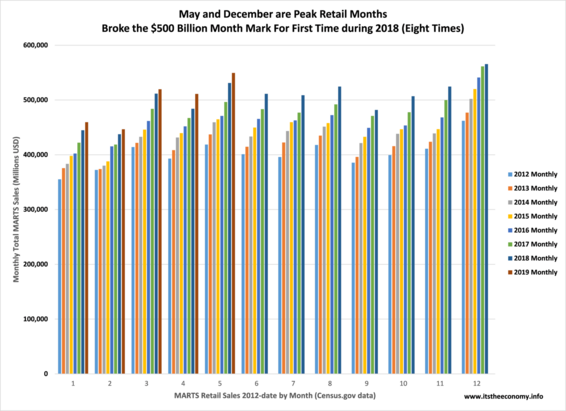 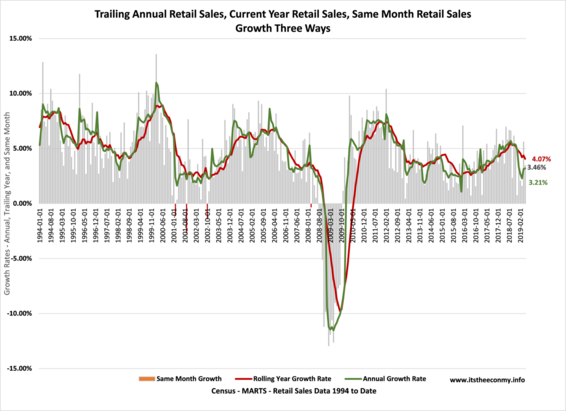 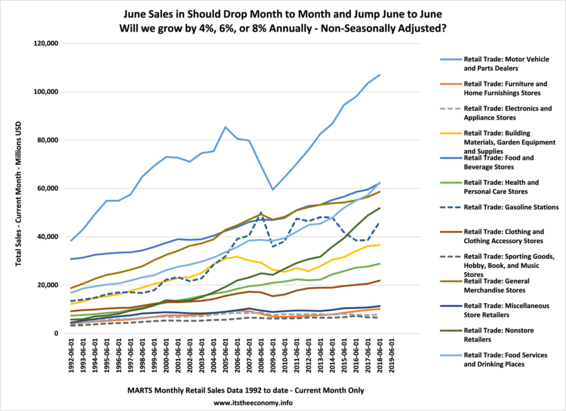 Last Year we had our First $6 Trillion MARTS Sales Year

Last Year We had our First Non-December $500 Billion Months, Plural

The monthly retail sales report (MARTS) can be a market mover. This report, as with most government reports, has a non-seasonally adjusted component and a seasonally adjusted component. It is proposed widely in the media that 70% of our Gross Domestic Product comes from retail sales. Peak sales during the first half of the year takes place during May. Peak sales during the second half of the year happen during December.  Even though this is an "off-peak" month we can expect to see a large spike in June to June sales this Month. There are many ways to examine the monthly retail data. Here is what we can expect from the data month to month and June to June.

We have sold more each month, the past five months, than we sold during the same months last year. January 2019 was better than January 2018. February 2019 was better than February 2018. The same is true for March, April, and May. Last year we eight months with over $500 billion in sales, with the first time happening during May. We have had three consecutive months over $500 billion, including May. We are on track for 10 months over $500 billion, including June. Last year we had over $6 trillion in total , non-seasonally adjusted, MARTS retail sales.

June to June retail sales should grow 4% to 8%, non-seasonally adjusted. The largest growth rates should be recorded in Gass Station Sales (GASS,) Food and Drinking Place (FDP,) Non-Store Retail (NSR,) Clothing and Clothing Accessories (CAC,) and Food and Beverage Stores (FBS.) This is important because FBS, FDP, and CAC are three of the four largest retail sectors, and the largest sector, Motor Vehicle and Auto Parts (MVP) are all expected to growth June to June.

May to June Sales will drop non-seasonally adjusted in all but one sector, as is normal for June. People spend more money on Mother's Day than Father's Day. People spend a considerable amount of money on Memorial Day and save some money for the Independence Day Week. It is possible that Electronics and Appliance (EAS) sales and Building Material and Garden Equipment Sales (BMGE) will grow as people buy things for their homes, new and existing.  The month to month drop could be 3% to 5%, even as the June to June data grows 4% to 8%. The sectors with the largest month to month declines should be BMGE, CAC, and MVP.

We should see seasonally adjusted month to month growth in all sectors except Miscellaneous (MISC) sales. We should see 0.30% to 1.00% month to month. The largest growth should be in NSR, CAC, General Merchandise (GM,) FBS, and FDP.

We should see 3% to 8% seasonally adjusted June to June Growth.  All sectors should see growth except Sporting Goods, Hobbies, Books and Music (SGHBM.) The situation here is the SGHBM and EAS sales are most likely shifting to NSR (The "Amazon Effect.") We should see a monster spike in GASS sales (approaching 20%,) and growth between 5.6% and 9.55% for MISC sales, FDP, and NSR. The wild card is will we see over 5% growth June to June in Clothing (CAC) and Health and Personal Care (HOC) as we saw last June?