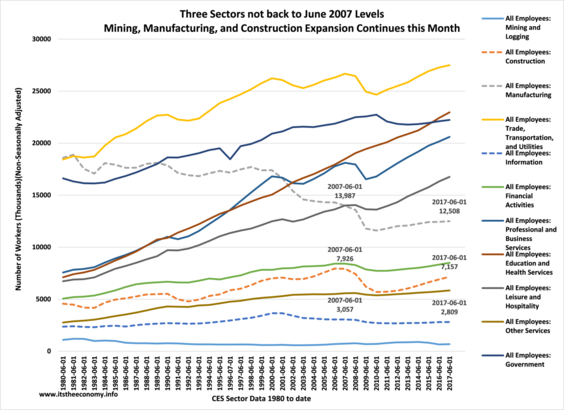 What is the real annual wage growth? Over 3%?​ Once again, the total wages earned has to be calculated, with  average weekly wage times number of workers, times 52 for 52 weeks in a year. If divided by the number of total workers you receive the average weekly wage across the entire workforce. The average wage earned by the Leisure and Hospitality sector, the fourth largest sector and the worst paid sector, skews the total average wage low. The TTU and EAH sectors, the two largest sectors, are the third and fourth lowest paid sectors. This is a trend that has been noted in prior articles. It will be especially important when the JOLTS data for May is released this week.

Wages were up over 3% in the Mining and Logging (M/L,) Construction, and Manufacturing sectors. Average wages were also up over 3% in the EAH and LAH sectors. What happens when the most populous sectors grow wages? The economy as a whole grows. The jump in the "dirty fingernail jobs" means that the economy is working on all cylinders.

When Wage growth is multiplied by Worker Growth then Total Income surges. When total income surges we should see Real GDP surge. Total income has surged 5% each of the past two months. Personal Consumption expenditures is one of the more main components of GDP (Gross Private Domestic Investments, Imports/Exports, and Government Consumption Expenditures are the other three.)

Three Sectors have still not recovered from the Great Recession. The Manufacturing and Construction sectors have not returned to their June 2007 levels, remembering that peak jobs were hit during July 2007.  Information and technology have never returned to their 2001 peak. The current growth in Manufacturing is "unprecedented."  We lost manufacturing jobs from 1997 through 2010. Housing is an economic driver for jobs and retail sales. Construction still has a long way to go to reach 2005 and 2006 levels of units built and workers working. We may not return to those heady levels of units built for many years, maybe 10 or more years based on the level of units started and completed as compared with the current month data for the early, mid, and late 1990s and the early 2000s.

Wage growth is good. The more people earn, the more they can spend. The more money that is spent, the more employees can be hired by employers. This is a virtuous cycle. The number of full-time jobs jumped this month. Normally is you work more hours then you make more money. None of this is rocket science.

The June Jobs Report was released July 6th. The report surprised some observers. The article "June Jobs Report Jarringly Good" detailed how we saw one of our best Junes for the addition on non-seasonally adjusted workers, one of our best June reports for Full-time Job Creation, and how we saw a spike in participation. The unemployment spike caught some of these observers off-guard. It was projected in the June Jobs Report Forecast article. These same observers have been lamenting a lack of wage growth for a number of years. How are we doing with wage growth this June?