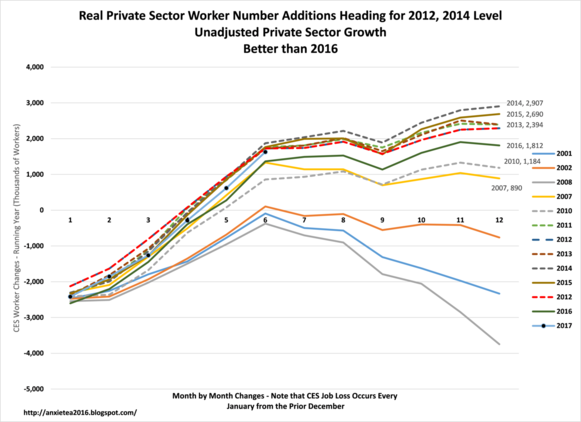 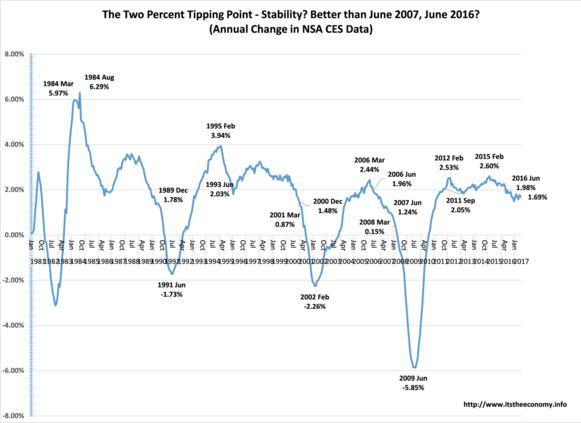 If you blinked you may have missed the coverage of the June Jobs Report. This past May the ADP jobs report was great and the Employment Situation Report was weak. This month the ADP report was weak and the "Jobs Report" was strong.  If you only look at the top line numbers of seasonally adjusted you would be disappointed. The unadjusted data is a different matter. President Trump is off to one of the fastest first five months in office ever reported. Full-time Jobs are up at the second fastest pace since Reagan. He has shed more part-time jobs and dropped the unemployment level the most of any of the prior two term Presidents since Reagan. We have also seen a month to month drop in the number of people working multiple jobs while seeing an increase in the same category from June of 2016. Where are the jobs?

We saw the number of workers jump in 9 out of 11 Sectors. The only two sectors that did not add jobs last month were the Government Sector and the IT Sector. Depending on if you are discussing growth rates or real changes, we saw the largest growth in percentage in the Mining and Logging Sector. The Leisure and Hospitality Sector added the most workers. Are they part-time or full-time?

Four sectors have not quite recovered to June 2007 Levels.  There has been a considerable amount of discourse on how strong the recovery has been. The recovery has been incomplete for some sectors of the economy. The table above shows that the Mining and Logging, Manufacturing, Construction, and Financial Sectors have not recovered. They are recovering. The Information Technology Sector cannot say the same thing. Will it ever return to the levels seen during the 1990s?

Worker additions are happening at a faster pace than 2016 and approaching 2012 and 2014 levels. There is a seasonality to worker growth - Summer hiring is Summer Hiring. We normally hit peak employment during July or August , slide a little as workers go back to school, and then pick up the pace of hiring until the Christmas Season is completed. We are doing better, as a whole, than we were during 2007 and 2016, as we have added more workers during the first six months of 2017 than the first six months of 2007 and 2016.

Can we project the future based on the past? This past Fall it appeared as if candidate Trump was inheriting a worker recession. The rolling year worker growth rate is a lagging economic indicator. The current year working hiring "spaghetti" graph is a snapshot of the current conditions. If we project forward we should do better than we have been doing. Will we hit a 2% annualized worker growth rate by September? Could we hit 2.5% by next February? If we continue trending with the current year data from 2012 and 2015 then the answer is "Yes." The question is can we maintain the Service Sector Gains and grow the Manufacturing, Mining, Construction, and Financial Sector gains?

Private sector growth is picking up the pace.You can see that Private Sector Growth started to slow during 2016. This was probably due to the Housing Recession. Less homes were being built, less loans were being consumed. We are still below the 2% threshold. This column had expressed concern over the growth rate for a number of months. The current year data indicates good news. The Rolling year data indicates that we dodged a bullet. Almost all sectors added jobs last month. The two weakest sectors have been the two weakest sectors for years. If you feel that the economy is doing well, you are probably working in one of the nine sectors that are doing well.