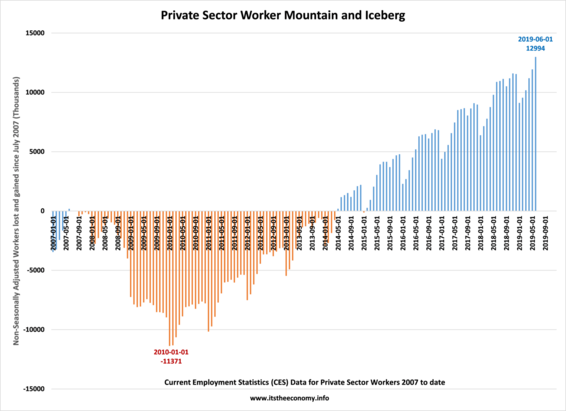 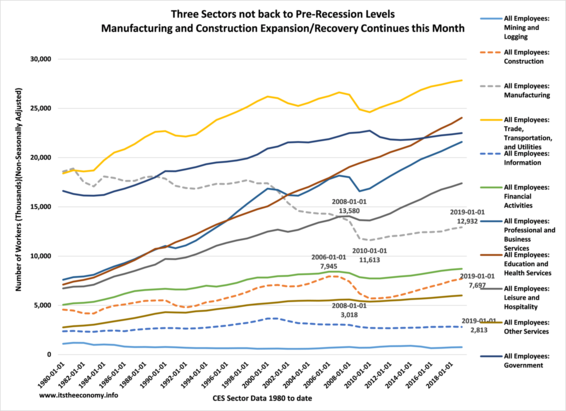 The June Jobs Report, or Employment Situation Report, was remarkable. We saw the largest gain in full-time jobs since 2006 (See "June Jobs Report Records Record Employment, Jobs" ). We saw the worker data rise dramatically, non-seasonally adjusted, and improve nicely seasonally adjusted. What happened with hourly wages, and hours worked? When wages grow, and the number of workers grow, gross income and the rest of the economy grows. Officially the average wage level rose 3.1% during the past 12 months. Not every sector grew at this rate. This article will examine the Current Employment Statistics (CES) Worker and Wages data.

We lost over 11 million Private Sector workers between July 2007 and January 2010. We did not fully recover these lost jobs, and maintain them, until after May of 2015. There is seasonality in the hiring. You can see from the sector graph that we lost workers in Construction, Professional Business Services (PBS,) Manufacturing, Trade, Transportation and Utilities (TTU,) and virtually ever other sector. Two Sectors that were relatively immune were Education and Health Services (EHS) and Leisure and Hospitality (LAH.) Three sectors have not returned to pre-recession: Manufacturing, Construction, and Information (IT.) Information has been on a long slide down since 2000. Manufacturing and Construction are still in recovery mode and continue to add annual jobs.

All Sectors Except IT Grew June to June. It was projected that we could see losses in government jobs month to month. Both Government workers and EHS workers were reduced month to month. The Largest month to month gains were in Leisure and Hospitality (2.54%,) Construction (2.04%,) Mining and Logging (M/L,)  PBS (0.94%,) and Manufacturing (0.91%.) The largest annual gains were recorded in M/L, Construction, EHS, PBS, and LAH. Total Private Sector Growth was 1.65%.

All sectors worked more hours. Hours increased between 2.43% for Manufacturing and 9.67% for Information. Hours worked were up 4.87% overall.

When Wages and Workers both rise then Gross Income Rises. There are four sectors that have seen their total wages earned rise by over 8%, including PBS, Financial Activities, Mining and Logging and Information. When you multiply wage growth by worker growth earning growth is compounded to 6.60%.