The March Monthly Employment Situation report was released this past Friday, and promptly forgotten by this past Saturday. It was thought that it was going to be another strong report. It was lackluster, at first glance.  To date there have been four articles published on this website:

The question is which sectors are doing the best?

Five Sectors have fewer workers than prior to the Great Recession. The Mining and Logging Sector (M/L,) Construction, Manufacturing, Government, and the IT sectors have fewer workers than during March 2008. We are seeing improvement from March 2010 with regard to the Construction sector and the Manufacturing Sector. One sector is still down from the levels recorded during 2010. Government has fewer workers now then during March 2010.  The largest gains since the recession have been in Leisure and Hospitality (the lowest paid sector) and the Education and Health Services sector. This may explain a large part of the sluggish annual wage growth.

Minor Revisions to prior data. The CES data underwent major revisions after the December Jobs Report, both the NSA adjusted data and the SA data.  Both months saw minor upward revisions to the NSA CES data which "lowered" the growth for March.

We have more workers now than during March of 2017.  We do not have the most workers ever, as we had the most jobs ever this month, because the CES worker data is different from the CPS jobs data. Wages are up. Unemployment is down. Virtually all sectors are doing better this March than last March. 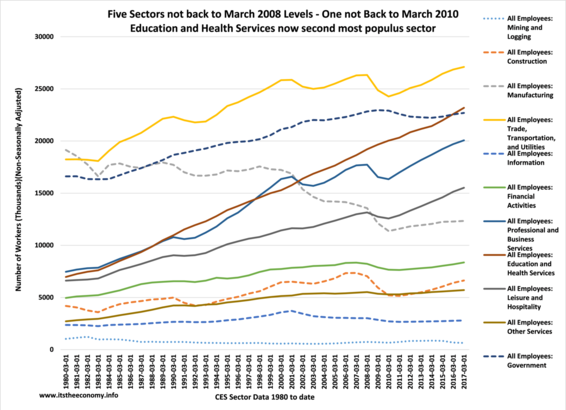