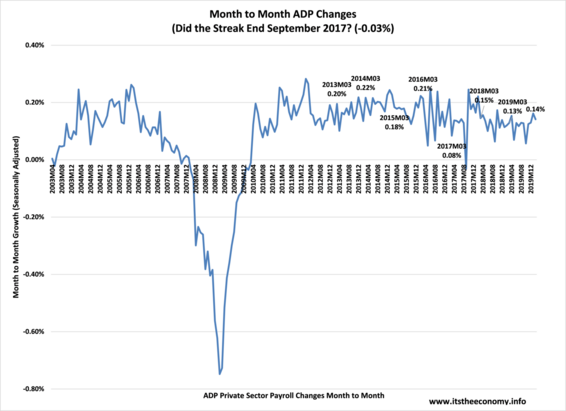 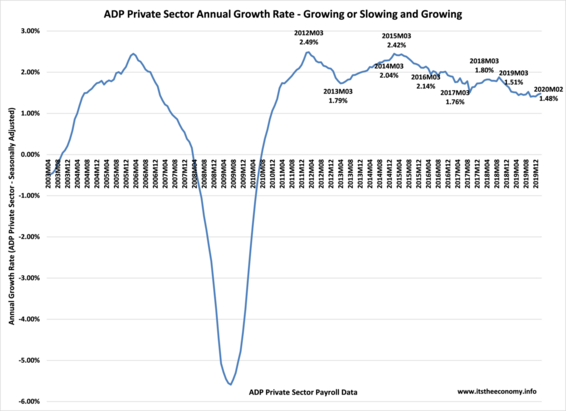 The ADP Payroll report is a Private Sector Jobs Report. The Headline Government Jobs Number is created using the Current Employment Statistics Worker and Wages data. The headline number is the Non-Farm Payroll data. The NFP data includes both Private Sector and Government Sector worker data. The government "Jobs Report" also includes data from the Current Population Survey (CPS) Jobs data includes data regarding full-time and part-time jobs as well as unemployed workers. These data sets are distinctly different in sample size and what they measure. What can we expect from the March ADP Payroll data? Expect the unexpected.

The US Economy was expanding before the coronavirus (BC.) March, April, May and sometime June are great hiring months. The March ADP data was collected on, or around, the 12th of March. We did not see "stay at home" orders until after that date. The March 14th unemployment data showed some weakness. The March 21st unemployment revealed the depth of the problem. This forecast is based upon businesses expanding as they normally would have expanded.

This data is indicative of where we were heading right before the Wuhan Flu, Chinese Coronavirus, or COVID-19, changed everything. The data for 2018 and 2019 were revised lower with the release of the February ADP report, after the January revisions to the CES Worker data. If we can resolve this issue before April 12th then we might see "normal" numbers released this April. If we cannot resolve it, then the 119 month ADP streak may come to an end. This was a government created shutdown/slowdown. It will be a government reboot and expansion. Will it be during April or May?