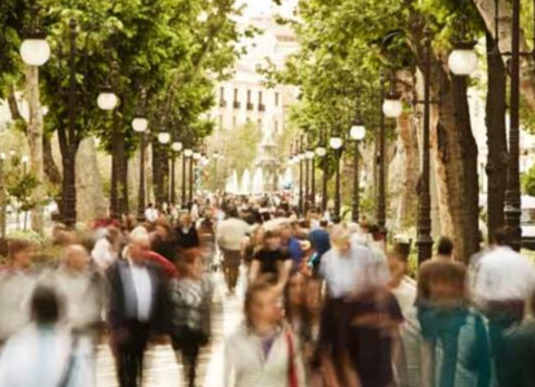 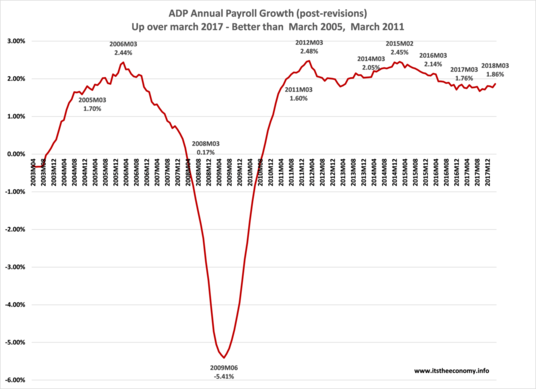 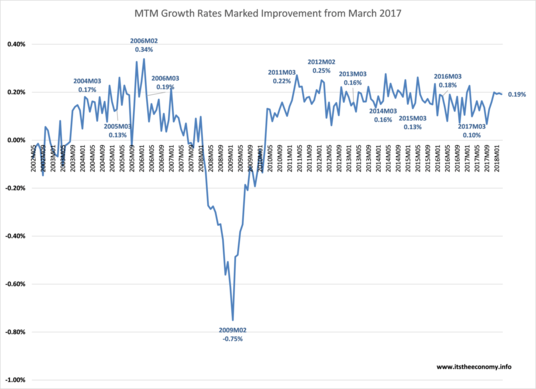 The ADP Payroll report is the first report released during "Jobs Week." The ADP report is released on the Wednesday prior to the Thursday Unemployment Claims report and the Friday Employment Situation report. This Monday this column published an article projecting solid payroll growth. "March ADP Expectations: Up over 215k" projected, for lack of better words, a reversion to the trend that we had been experiencing during the past year, prior to the massive revisions to the ADP data that happened last month. We were growing at 2.27% after the January Payroll report. January's growth rate was revised down to 1.80% with the release of the February data and report. This difference in growth rates, if carried forward this month, is the difference between an ADP number of 163,000 new, seasonally adjusted (SA) jobs and and over 700,000 new SA jobs.

Could we really add over half a million people in the ADP payroll report? That would seem inconceivable if the research for the March Employment Situation Report had not already been published. "Will March Jobs Report be in Like a Lion" projected more of the same. We have had the strongest first thirteen months under any President since, and including, President Reagan. The ADP forecast article for this month projected month to month, seasonally adjusted, growth in all sectors except the Trade, Transportation, and Utility (TTU) Sector and the Information Technology (IT) sector. The March to March growth projected growth in all sectors except Natural Resources, also known as Mining and Logging in the Employment Situation Report. The devil is in the seasonal factors and the growth.

We saw a headline number of 245,000 reported. What is not being discussed much, if at all, is that all sectors saw month to month growth. All of them. The TTU and IT sectors even added to their payrolls. Construction jobs were at their highest payroll levels since June 2006.

Record Setting March. We saw the most goods producing jobs added during the month of March since 2004, the first data available for March. We have the highest ever March level of Payroll for  Professional Business Services (PBS,) Education and Health Services (EHS,) and Leisure and Hospitality (LAH.) We also saw the highest ever payroll levels for the Financial Activities and for the Other Services sectors. The best month of the year tends to be July or August.  The MTM growth rate was 0.19%, the best March since 2011 and 2012 while we were still crawling out of the jobs hole.

We saw annual growth, March to March, in all Sectors except IT. That pretty much says it all. The annualized growth rate was 1.86% this March, compared to the "official" 1.76% rate last March, after the revisions. This should imply strong CPS jobs data and strong CES worker data.

The Weekly Unemployment claims data will be released tomorrow. The non-seasonally adjusted (NSA) first-time unemployment (FTU) claims number could, in theory, go in either direction by 2% or 3%. NSA Continuing Claims (CC) should drop 1.5% to 3% tomorrow. The question is how much lower can they really drop? Last week's article projected a SA FTU under 200,000 by September. We are already 30,000 claims lower than we were last year at he same time. Could we drop below 160,000 NSA FTU by the end of September? The NSA CC level was projected to be below 1.5 million by the first week of October. There will be more discussion on these points in tomorrow's article.

The Monthly Employment Situation Report will be released on Friday. The ADP data indicates that we should grow faster than last March and possibly faster than March 2011. If there is any correlation between the ADP data and the "jobs" data this could be a huge jobs number. We saw spikes in growth during march 2011, 2012, and 2014. March 2014 grew at 0.74% with 2011 and 2012 being even higher. A 0.74% gain would put us over 400,000 CES workers, virtually unimpacted by the seasonal factors. Watch the revisions. Watch the seasonal factors. The January ADP data was revised down by 3,000 jobs while February was revised up by 9,000. An upward revision to the February CES data of 25,000 would "steal" 25,000 from the March data, and a downward revision to February would boost March.

The March ADP Report can be found here.