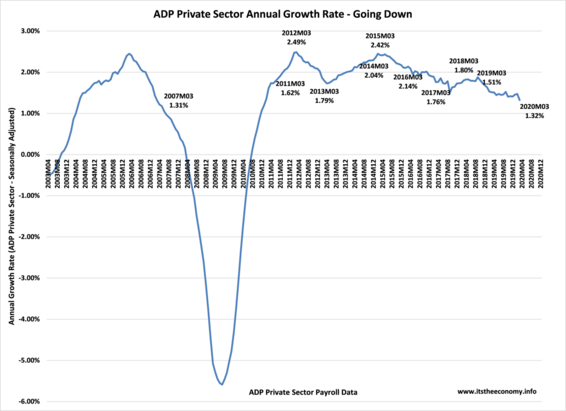 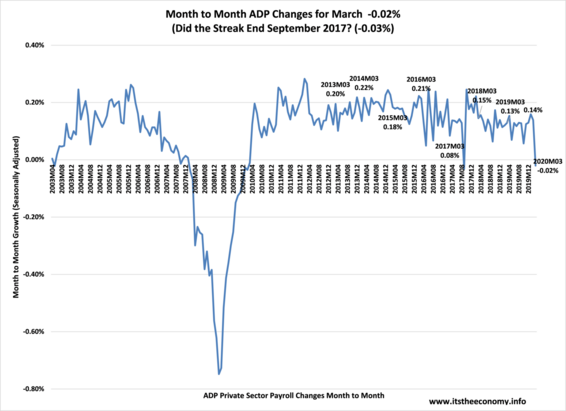 The February Jobs Report was released Before Coronavirus (BC)

March Was Still BC - And Expected to  Be Remarkably Strong - Maybe Not.

The first two job reports of 2020 have been very strong. Full-time jobs were up, unemployment was down, all sectors were looking great. The Wuhan Virus, COVID-19 Wuhan Flu, or "the coronavirus," have changed everyone's thinking regarding the next few months. The good news is that February was definitely BC. The March Current Population Survey (CPS) data for jobs and unemployment, and the Current Employment Statistics (CES) workers and wages data, were collected close to March 12th. Most of the "self-quarantine action" happened around St. Patrick's Day. Where were we this March? The top of the ADP report indicates that most  the data did not reflect the full impact of the COVID-19 shutdowns.

The ADP Private Sector Payroll data indicated the potential for a strong month. The ADP Private Payroll data indicated that we should have seen growth in all sectors month to month and March to March. "March ADP Forecast: BC Strength" detailed how all sectors, with the possible exception of Mining and Logging, should have grow month to month and March to March. The month to month data is indicated 180,000 to 220,000 payroll positions could have been added this March. The March to March data  indicated 181,000 to 233,000 payroll positions added, with the data favoring the 205,000 to 210,000. If the data from February was revised higher by 20,000 then that 200,000 to 210,000 number was expected to be reported between 180,000 and 190,000 positions.

The headline ADP Private Sect Payroll Number was reported at a negative 27,000 jobs. This is the first official drop in the ADP Payroll since November 2009. There was an unofficial drop in payroll positions, month to month, during September of 2017. The ADP forecast article details how this value for September 2017 has changed from year to year. Originally the September 2017 number was 97,000 positions added. That was revised to 84,000 after the 2018 revisions, and 111.000 after the 2019 revisions. Now, with the 2020 revisions the monthly number for September 2017 is a negative 39,000 positions.

Two other things that need some attention. It is important to note that there were minor downward revisions to the January and February data. It is also important to not that all recessions are jobs recessions. We have more payroll positions this March than we had last March. We are not yet in a recession.

What does this mean for Friday's headline Non-Farm Payroll Number? Government Jobs are expected to increase month to month and March to March, so the headline number should come in stronger than the ADP Private Sector Payroll Number. It is important tp remember that the ADP data is different from the Current Employment Statistics (CES) Wages and Worker Data. The CES data is different from the Current Population Survey (CPS) jobs and unemployment data that is used to calculate the unemployment rate and participation rate. The ADP data is rarely in agreement with the CES data.