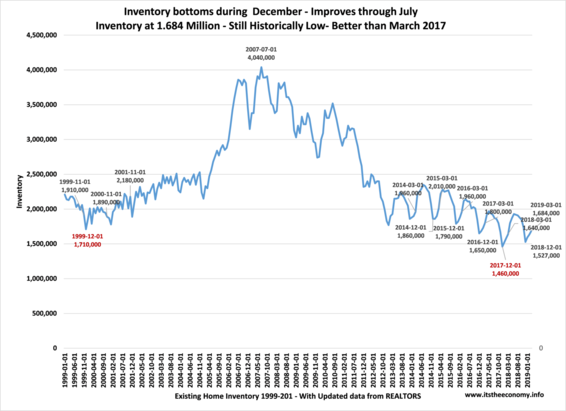 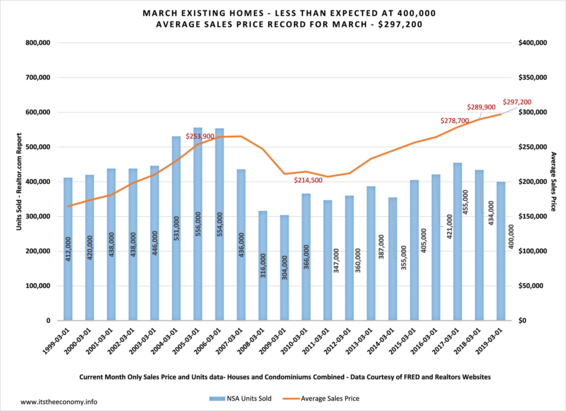 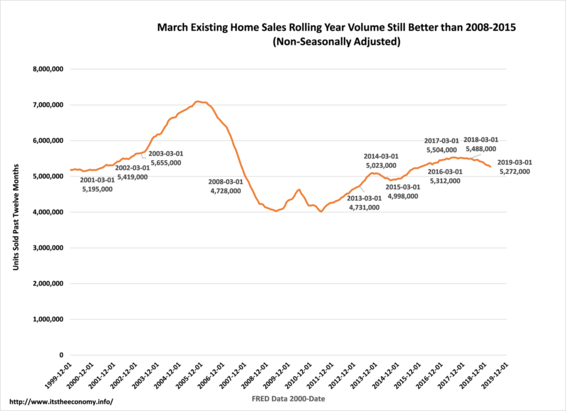 The item that has been overlooked during the recent reports regarding the new home construction data and the new home sales data, other than they were delayed due to the Government Shutdown, is that loans are often required for construction to begin and for sales to commence. Loans go through Washington DC. This is the Spring Real Estate Season and the data may start showing lots of green as both flowers and sales start sprouting. There may have been a delay in blooms due to the Government Shutdown.

Rolling Year sales Came in at 5.272 million Units, down from March 2018 when we had 5.488 million units. The total number of sales during the past twelve months gives us a relative perspective of to where we have been and where we may be heading when compared with the current year data. We are 4.30% lower this march than we were during March 2018. This means that we could end of 4% lower next year, or at roughly 5.252 million units next March.

Inventory drives real estate sales. Mortgages are more often than not required to purchase a home. Were sales slowed by the Mainstream Media Mania over a potential fifth rate hike, or a potential recession, or weak December Retail Sales or the Government Shutdown?  Was this a "kink in the hose" or was the water shut off entirely?  There are nearly ten time the number of existing homes sold as new home sold - this month it may be closer to a six to one ratio.  Home sales are retail sales multipliers. Full-time jobs and higher wages are retail multipliers and real estate multipliers. This data was good, not great. Inventory is improving. The Average Sales price is improving, good for home sellers, not so great for home buyers. Units sold are still lagging behind where we were during 2016, 2017, and even 2018.