We are in uncharted economic waters. This data was supposed to show some strength due to when the data is normally collected.Normally it is collected prior to the 12th of the  we lost full-time jobs and added part-time jobs. This March we added some, not many, full-time jobs and shed month. We did not see a huge spike in weekly claims during the  week ending march 14th. It wasn't until March 21st and March 28th that we recorded historic spikes in weekly claims. The data is remarkable. It is remarkably bad. There were some "bright spots."

Why is the seasonally adjusted data for March 2020 worse than March 2009? I do not have a good answer for the question other than the seasonal factors are playing with the seasonally adjusted data. We lost 1.7 million NSA CPS FT jobs this March and 1.1 million lost part-time jobs. This was "reported" as a loss of 3 million SA CPS jobs. (Remember that we "only" lost 713,000 private sector workers. There were not working that many multiple jobs apiece.)

Unemployment did not spike as much this March as during March 2009. The Unemployment numbers are just as baffling. The unemployment data spiked by 1.1 million NSA and 1.3M SA. How did we lose 1.7 million workers NSA and only add 1.15 million unemployed workers? The multiple job worker data also took a big hit. (This will be covered in the Men, Women, and Multiple Job Workers Article next week.)

What does all of this mean? The non-seasonally adjusted data wasn't as bad as the seasonally adjusted data because the seasonal factors were expecting strong results, and the need to temper the enthusiasm, and instead received bad news and amplified the bad news. We have seen more than 8 million non-seasonally adjusted first-time unemployment claims processed during the past two weeks. This was reported as nearly 10 million seasonally adjusted worker filing for benefits. The seasonal factors are amplifying the bad news, again. (See "Weekly Unemployment Claims (CE) Coronavirus Era Spike.")  Will we see the Employment Situation data reflect the loss of 8 million, 10 million, or 12 million CES workers, or 8-12 million CPS jobs next month? Probably not. The CES and CPS survey data is very different from the weekly claims data.  Will next month's data be "ugly?" Almost certainly.

There was some good news in this jobs report It should have been the final BC, Before Coronavirus, Jobs Report. Next month we will receive the first CE, Coronavirus Era, Jobs Report. When we emerge from this government created shutdown we will receive the AD, After Disruption, data. This data right now is BC, Beyond Crazy. We have fewer unemployed and a lower unemployment rate than during the Great Recession. We have a higher participation rate this march than any March after 2012. The Participation rate may continue increasing as the unemployment rate increases. We are going to see shifts in sectors that are hiring and sectors that are furloughing employees.

This is important: We have furloughed workers, not really unemployed workers. Yes, they are really unemployed. Yes, they are no longer working the jobs that they were working during February. The news is reporting that most of the employers are hoping to restore their workers positions as soon as they are given the all clear to bring back workers.  That wasn't the case during 2009.

What's next? Next week this column will write articles comparing President Trump to his predecessors in the "Five Presidents" series. He still has overseen the creation of more full-time jobs than former Presidents Reagan, Clinton, George W Bush, and Obama after 38 months in office. The number of total jobs are down  over the level of March 2019 so we should see men and women working fewer jobs than last year. The multiple job holder data did dip month to month. It will be interesting to see how we are doing compared to March 2019.  Which sectors "took it on the chin?" Most likely we will see a drop in the Restaurant (Leisure and Hospitality) sector. We will receive the Regional and State data in two weeks. This receives some attention in this column during a crisis (Hurricane Harvey and Irma.) It may or may not receive much attention elsewhere. Stay tuned. 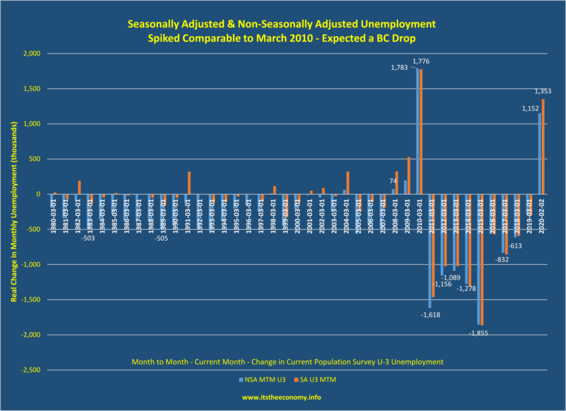 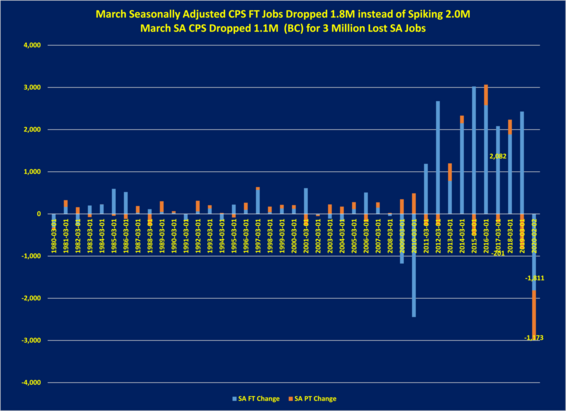 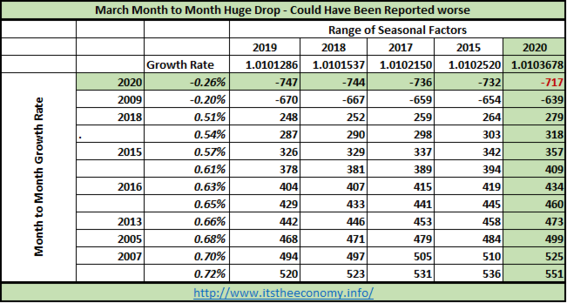 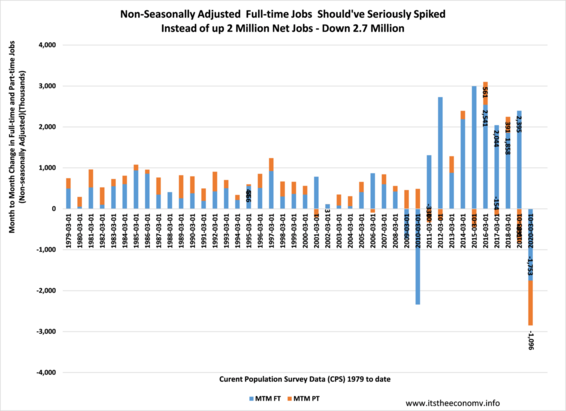 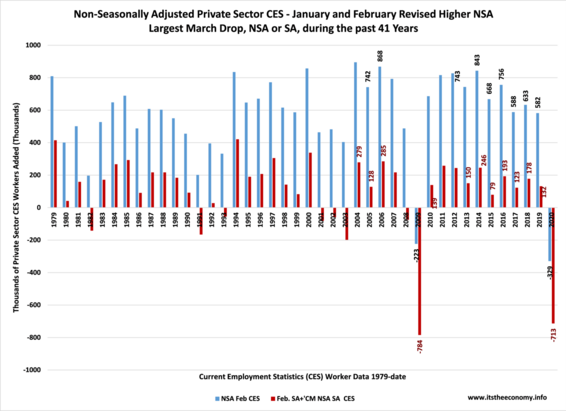 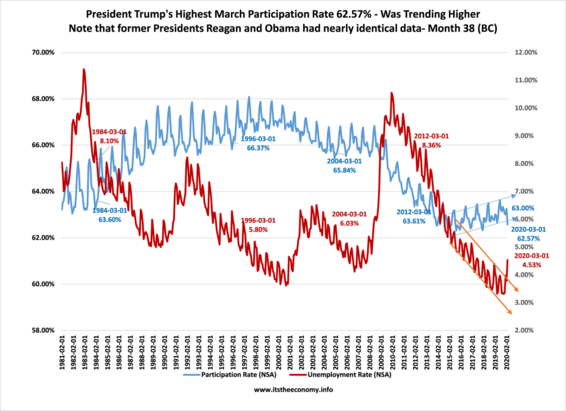