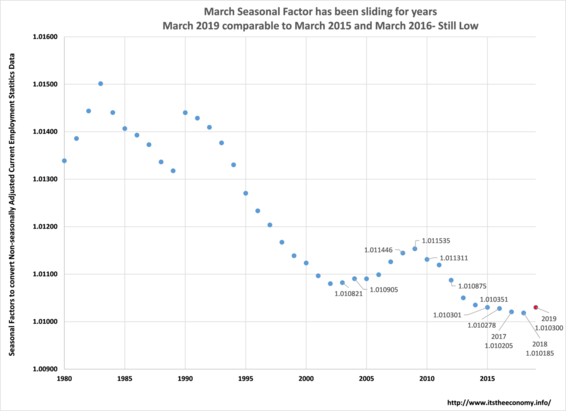 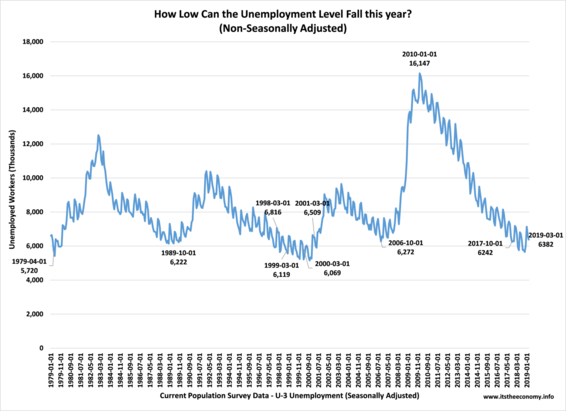 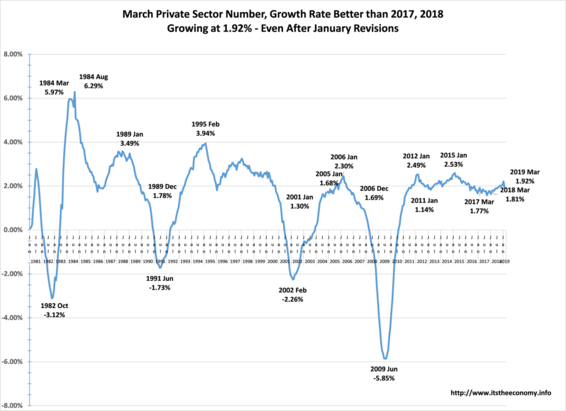 The February Jobs Report was a Tale of Two Data Sets

The March Jobs Report is the Sequel

The February Jobs Report was either very strong or very week depending upon whether or not you were looking at the Current Population Survey (CPS) jobs and unemployment data or if you were looking at the Current Employment Statistics regarding workers and wages. The headline seasonally adjusted (SA) non-farm payroll (NFP) data was a disappointment at only 20,000 SA NFP workers added to the economy. The non-seasonally adjusted (NSA) CPS data recorded over 1.2 million jobs created. This is why the participation rate rose while the unemployment rate fell last month.

It was expected that we would see roughly 2.00% non-seasonally adjusted worker growth March to March this year. The March Jobs Report Forecast article examined the recent trend in data and projected 1.93% to 2.05% NSA annual growth and 0.51% to 0.63% NSA month to month private sector worker growth. It was also projected that we would set a 40 year low for the seasonal factor used to convert the NSA CES data that is recorded to the SA CES data that is reported.  Would it be 30,000 or 100,000 more to the upside? The NSA CES data was better than February 2014, February 2015, and 2016 while the SA CES was worse than February 2014, 2015, and 2016.

Warned to Watch the Government math. It was also thought that we could see a substantial upward revision to last month's headline SA NFP data. Remember an upward revision to February "borrows" growth from March. If we would grow by 275,000 workers during March and we revised February up by 100,000 workers to 120,000 then the 275,000 this month would be reported at 175,000. The headline would be that the economy is slowing because we didn't add 200,000 workers.

All sectors were expected to add seasonally adjusted workers month to month and potentially March to March. The only sector that looked like it would decline from their March 2018 level was Mining and Logging. Record March weekly wages were anticipated.

The Household data on Jobs showed that were recorded a net gain in non-seasonally adjusted jobs. We saw a loss of 17,000 full-time jobs and a gain of 291,000 jobs. This is similar to what we experienced during March of 2018. We often see a gain in moth NSA full-time jobs and NSA part-time jobs. The past two years we have had extremely strong NSA job creation during February. It was though that because this February was a little slower than February 2018 (1.2 million  jobs versus 1.5 million jobs) that those 300,000 jobs might have slid into the March data.

Still climbing the Jobs Mountain. If you take a look at the "Jobs Mountain" histogram at the start of this article you will see that we have 5.6 million more full-time jobs than we had during July 2007, the pre-recession peak for combined full-time and part-time jobs. We have also added 4.087 million part-time jobs. We saw the loss of 14.442 million full-time jobs between July 2007 and January 2010. We still had fewer FT jobs during January 2017 than we had during July 2007 when President Trump took office.

The seasonally adjusted jobs number came in at a loss of full-time jobs and a gain of part-time jobs. This means that part of the participation equation, for the seasonally adjusted data, is a negative. We lost jobs even though we added jobs in reality. This is the opposite of what we saw last month when we had weak SA CES worker data and strong CPS jobs data. This month we had relatively strong SA CES worker data and weak SA CPS jobs data. (The NSA CPS, SA CPS, and Jobs Mountain Charts can be found here.)

There is a considerable amount of data that can be examined in more detail than this one article provides. How did we do with regard to wages and workers? Which sectors grew month to month and March to March. How did wages grow? How are men and women performing in this economy. What is happening with the number of multiple job workers? Are we still seeing younger workers (16-24 years of age) under-participating and workers 55 years of age an up "over-participating?" How is President Trump doing after 26 months in office compared to former Presidents Reagan, Clinton, George W. Bush and Obama? These articles will be published over the next few days and weeks.

It was thought that we would see a spike in full-time jobs and part-time jobs while also seeing a substantial drop in unemployed workers. This was expected to boost the participation rate while cutting the unemployment rate. The question is was whether or not  some hiring that was expected during February get pushed to March?  The headline participation rate dropped slightly because we saw the workforce population increase by 145,000 potential workers and saw the overall jobs level drop by 130,000 and the number of unemployed workers fell by 24,000 workers. The Non-Seasonally adjusted participation rate was slightly lower this month, dropping from 63.00% to 62.98%. This is because we saw 243,000 fewer unemployed workers , 17,000 fewer full-time workers and 291,000 more part-time workers, a net gain of 31,000 participants for 145,000 more potential workers. This was a solid report. 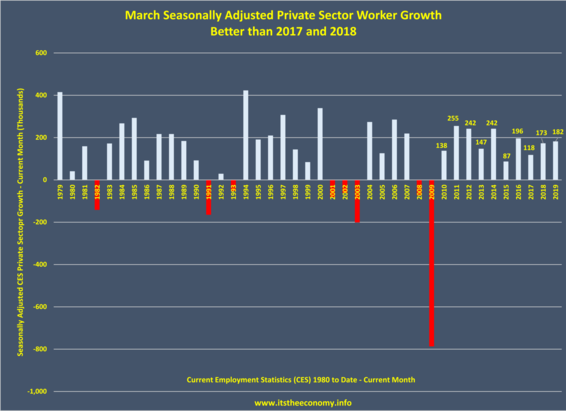 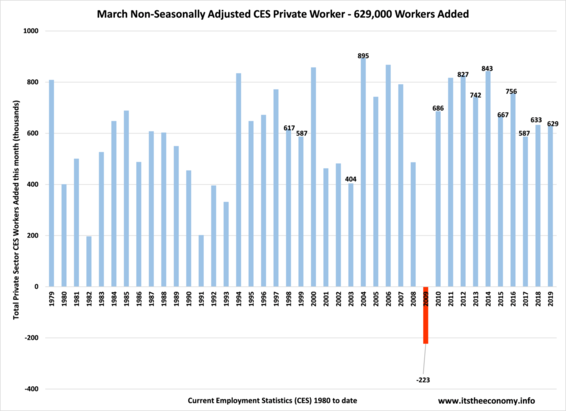 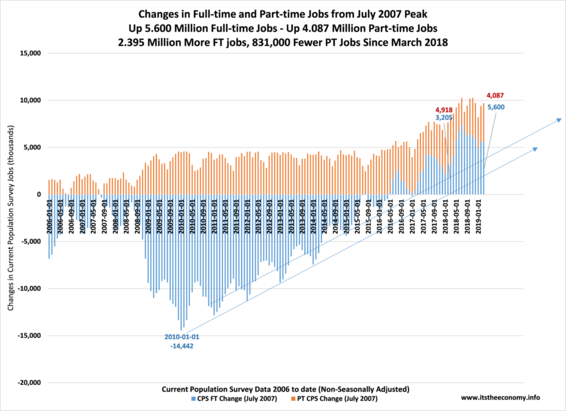