There are many more ways to examine the data, including how en and women are doing in the new economy.

There are more Men and More Women working this March than last March. This is important because when the total job number falls below the prior year's data, and does so on a consistent basis, then we may be seeing the beginnings of a Jobs Recession. We are not there  right now.  The men have swapped some part-time jobs for full-time jobs.

This is something that has been ignored for many years. When the "Jobs Iceberg" was revealed on "Reclaiming Common Sense, the sister site to this one, it was dismissed as not representing reality. The Iceberg has changed to a mountain. We are swapping out part-time jobs for full-time jobs. This is a good thing. The former administration though that it was a good thing for "Julia" to work two part-time jobs and have some "flexibility." Anybody who has worked two jobs know that this is the antithesis of flexibility.

Dual Jobs Workers grew from 7.823 million to 8.047 million workers/jobs. Fewer men worked two jobs during March than during February.  There were 3.815 million men working two jobs last month and 3.863 million men working two jobs this month. Women, on the other hand, saw an increase of dual job workers from 4.008 million to 4.184 million dual jobs workers. The number of multiple job workers tends to hit a Spring Peak, a Summer Valley, as people work seasonal full-time jobs, Before rebounding to the normal high for the year during either October, November, or December, as Christmas hiring kicks into overdrive.

A second job is the ultimate form of unemployment insurance. If you have two jobs and lose one then you are still employed, not unemployed. We had a record 2.197 million March workers who were working two part-time jobs. Part-time workers do not receive unemployment benefits, unless it falls under the Disaster Unemployment Assistance Program. We have seen a fairly steady increase in the number of people working two part-time jobs since 2008.

Women have added more jobs since the recession than men. Women are on the verge of setting all-time record number of jobs, not month dependent, during April. It may take men until July or August this year to set an "all-time high."

"All recessions" are jobs recessions. We are seeing replacement of part-time jobs with full-time jobs and the creation of new full-time jobs. We are seeing wages rise. Participation is rising for women and stabilizing for men. More full-time jobs with higher wages, as detailed in the worker and wages article, increases the monthly and annual spending power of the workforce. We will have to watch the Jobs Mountain to see when a change happens, if a change happens, that marks a same month decline in jobs from the prior year.

President Trump is doing something only two other Presidents have done during their first 26 months in office, boost the participation rate. So far he is also doing something than former President Clinton achieved during the early years of his Presidency: Cut the unemployment level and boos full-time jobs. But what about the final two years of rising wages encourage workers to come off the sideline. Participation is improving the Obama administration and the first two years of the Trump administration. Been there. Done that. President trump created a million more jobs. Former Presidents Obama, Bush, and Reagan were able to win re-election with weak jobs data. What is going to happen over the next year and six months? 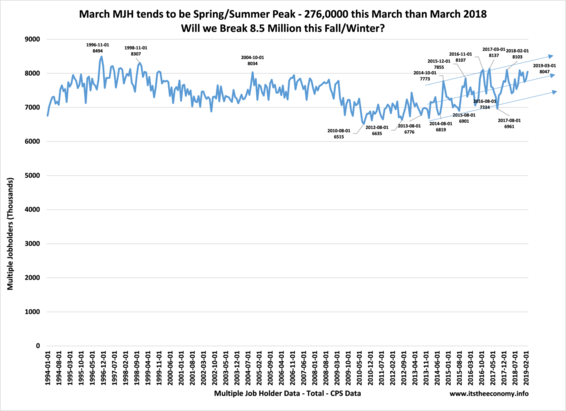 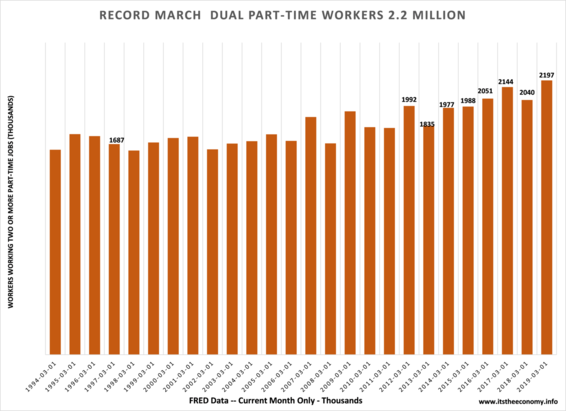 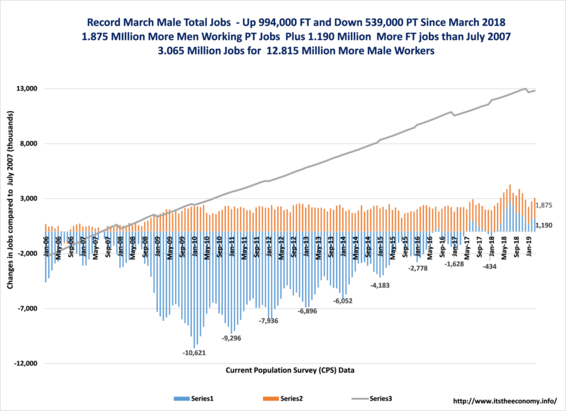 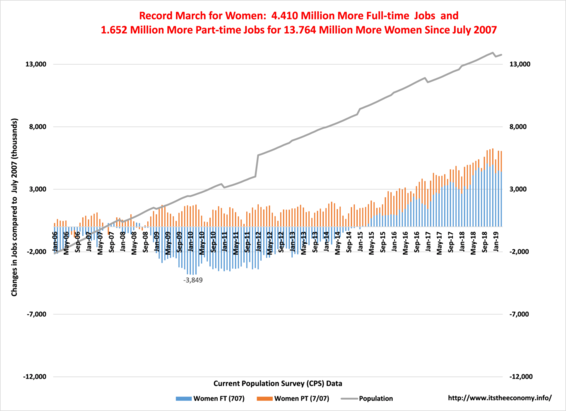