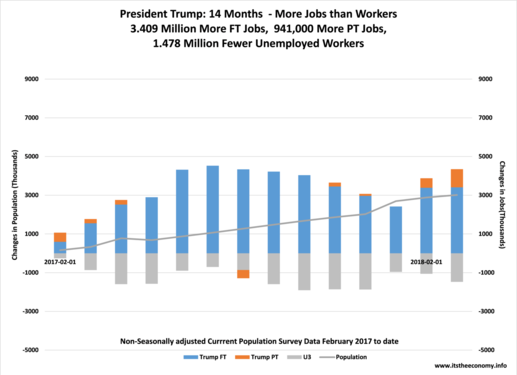 Entire articles could be written on the changes month to month and year to year for each of the age groups and each class of worker, employed, unemployed, participating or not. The economy is improving. Jobs are up. Unemployment is down. Some age groups are doing better than others. Men did better this past month than women did. Women are still doing better than men for job creation since the recession. Men work more full-time jobs than women do. Women work more part-time jobs than men do. Some sectors are seeing higher levels of hiring. Some sectors are seeing higher levels of wages and larger wage growth.  This was an unloved jobs report because it wasn't "easy" to digest. The economy is doing well. The reporting on the data is not going so well in some parts of the media.

The March Jobs report, also known as the Employment Situation Report, was was not received very well when it was released the first Friday of this month. 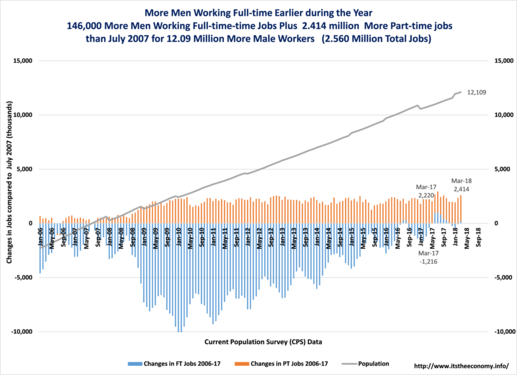 Unemployment has been falling since 2011 - That held true for most age groups during March. We did see March to March increases in unemployment levels for those 60-64 years of age and for those 75 and older. It is interesting to note that there are more unemployed workers over the age of 55 now than during 2005, 2006 and 2007. You will note that the level of unemployed workers for teenagers is the lowest it has been since 2005.

Our Workforce Population is Aging. Our workforce, on the low end of the age range, has been shrinking. Note the 20-24 year old range has been contracting since 2014.  Also note that the age groups between 45 and 49 and 50 and 54 years of age are down compared to March 2008. Some of this is due to an "age shift" that happens every five years. People who were 40-44 years of age during 2008 were 45-49 years of age during 2013, and are now 50-54 years of age now. Some of this may be because people gave up looking for work during the Great Recession. Note the drop in those 50-54, 55-59, and 60-64 years of age over the past two March reports. Also note the record levels of people over 60 years of age who are still in the workforce population. These age groups also have record levels of workers. The perception that are workforce is aging is correct, the perception that participation is falling because Baby Boomers are retiring appears to be misguided.