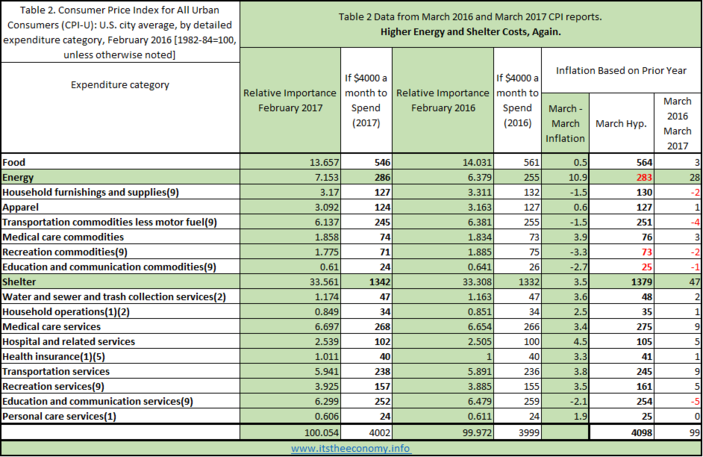 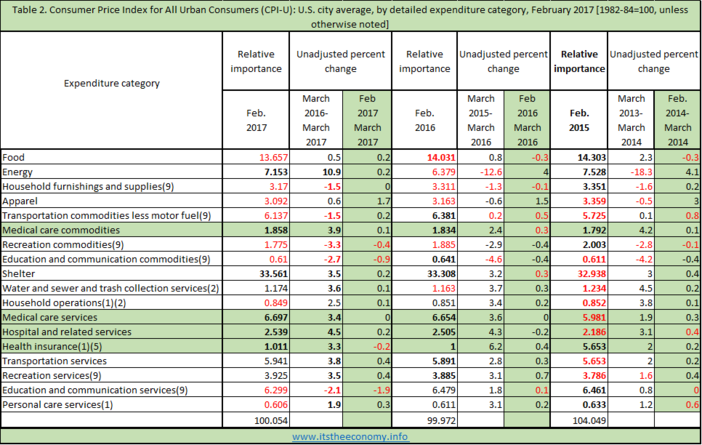 Last week we received a considerable amount of data while some people were focused on Holy Week. One of the tidbits that was released on April 14th was the Consumer Price Index report. The data that was released for the month of February painted a picture of a possible annual inflation rate of 3.0% for this month. We know that prices at the gas pump are rising. We know that shelter costs have been rising. Where else did we see increases in prices?

The story behind the data is how the basket of goods is weighted. We are supposed to spend roughly 33% of our income on shelter, according to the government. This is important because that is the upper lending limit for a mortgage, with all other debt. We are supposed to keep that value down to 28% without other forms of debt.  Shelter costs are up 3.5% and water and sewer costs are up 3.6% over last March. Both have increased at a pace over 3% during March 2015 and March 2016. What is different this year is that Energy costs are up 10.9% over last year.

What Difference does it make? If you examine how they say we spend our money, and if you hypothetically take home $4000 a month you will see that with the inflation we have in the various segments of the economy that we would need an additional $99 this month compared to last March to buy the same basket of goods. That means that overall inflation is roughly 2.5%. It cost you $28 more las month that during March 2016 for energy. It cost you $47 more last month for your rent or mortgage payment. I still haven't heard of anyone who only pays $40 a month for health insurance.

Did you receive a 2.5% pay raise last year? If you did, good. If you didn't, then this could explain sluggish home sales, in units, and sluggish retail sales. The March MARTS retail survey was good. The annual growth in retail sales was 3.94%. If growth exceeds inflation then we have real growth.  The Jobs Report data forFebruary and March were great - the seasonal adjustments were not so great. The unadjusted data revealed decreases in unemployment and increases in participation.We may see wages increase as demand increases for goods and services. We will need to see some wage increases if we are to keep pace with inflation.