The February Jobs Report was a Tale of Two Data Sets

The March Jobs Report is the Sequel

The February Seasonally Adjusted (SA) Current Employment Statistics (CES) data was reported as weak and the Non-Seasonally Adjusted (NSA) Current Population Survey (CPS) data was recorded as being strong. This month the NSA CES data was recorded as strong and the SA CPS jobs data was reported as being weak.  The good news was that we continue to see strong wage growth and that wage growth is better than the rate of inflation. These are real gains. How good was the data?

The non-seasonally adjusted CES  month to month data projects all sectors to add workers. The largest growth rates were expected in Leisure and Hospitality (LAH,) Construction, Mining and Logging (M/L,) and Professional Business Services (PBS.) The largest growth, by percentage, were in Construction, Other Services (OS,) PBS, Government, and Information Technology (IT.)

The Seasonally adjusted month to month data is projecting worker gains in all sectors.  That didn't happen. The largest growth rates were expected in M/L, Information Technology (IT,) PBS, Manufacturing, and Trade, Transportation and Utilities (TTU.) Here is where the data gave us some surprises. The SA CES growth rates were negative in Construction, Manufacturing, and Government.  The best growth rate month to month, NSA, was Construction and the data went negative seasonally adjusted. The sectors with the best SA CES growth were TTU, PBS, LAH, M/L and EHS,

The Seasonally Adjusted March to March data indicated that all sectors except Mining and Logging should add workers. This does not make sense. We had 714,00 SA M/L workers during March 2018 and  754,000 SA M/L workers last month. We are in an energy boom. The largest growth rates are expected in Construction, PBS, EHS, LAH, and Financial Activities (FIRE.) Expect all sectors to add seasonally adjusted workers from their March 2018 level.

All sectors were expected to add seasonally adjusted workers month to month and potentially March to March. The only sector that looked like it would decline from their March 2018 level was Mining and Logging (M/L.) The NSA CES data showed that we recorded gains in all sectors month to month, including M/L,  The largest SA CES growth rates were found in M/L, EHS, Financial Activities (FIRE,) PBS and LAH.

Record March weekly wages were anticipated.  All sectors received annual pay raises running between 1.59% and 6.11% for an average NSA wage increase of 3.13% The thing to take away from this is that each sector grows at its own rate and each sector receives different pay raises. The lowest paid sectors, on an average hourly rate during March were LAH, TTU, OS, and EHS. We consistently see the most Job Opening and Labor Turnover Survey (JOLTS) openings, separations, quits, and Hires in PBS, TTU, and EHS.

Three sectors have not returned to their pre-recession worker levels. Two are working on it. Manufacturing and Construction have almost returned to their 2007 levels of workers. Information Technology has been on a nearly two decade slide. There are more workers in Manufacturing than there are workers in financial Actives, OS, Construction and Mining.

This data, as was the case last month, is a tale of two data sets. It is also a tale of seasonal factors. We saw the largest NSA growth rate, month to month, and the second largest annual growth rate, march to March, in the construction industry. Somehow we reported a drop in Construction and Manufacturing and Government, The Devil is in the Data. 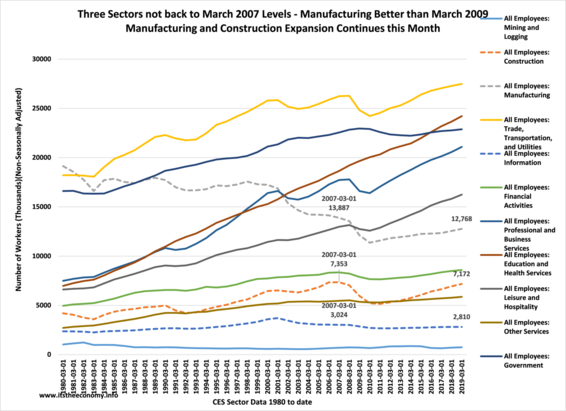 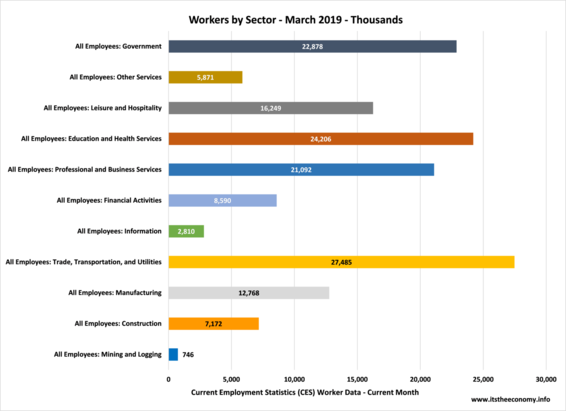