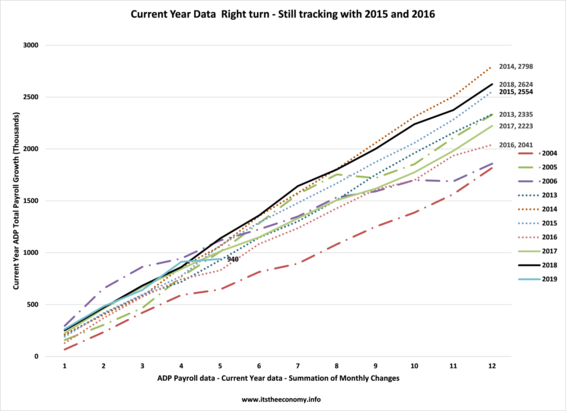 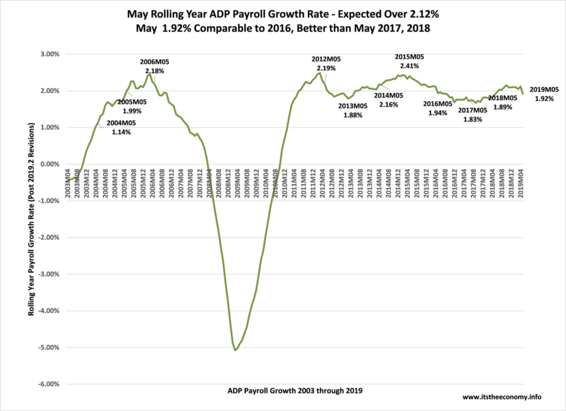 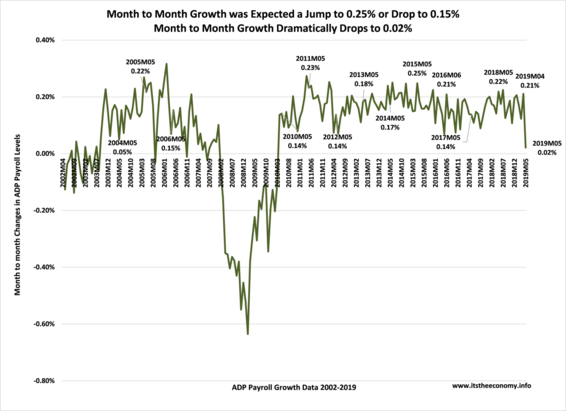 Best May to May Growth since 2016 - All Sectors Up

The ADP Payroll report is released the Wednesday before the government's Employment Situation Report, or jobs report. ADP is a private company and reports on the private sector payroll numbers. The Jobs Report headline number is the Non-Farm Payroll (NFP) number. The NFP includes both private sector and public sector "jobs." We are off to our best start since 2006. The current year data was projecting 180,000 positions added as a minimum and possibly up into the 250,000 range if we "throw out" the March data. All sectors were expected to grow month to month and May to May.

The Month to Month Data was projected to either drop or spike from last month's growth rate because it has been bouncing like a ping pong ball. This May was the worst May, without an actual contraction, since May 2004 when we had monthly growth of 0.05%. This month we only grew at 0.02%. The official Seasonally Adjusted Payroll number came in at just 27,000 positions added. This comes with a minor upward revision of 6,000 positions added to March and 2,000 positions added to April. The number was thought to be 207,000 or 227,000, or 270,000, not 27,000.

The Rolling Year data indicated that all sectors should grow their payrolls, and they did. It was thought that we would see growth in Natural Resources, Construction, and PBS, as well as Leisure and Hospitality (LAH,) and Education and Health Services (EHS.) Growth in PBS, TTU, and EHS and LAH are expected because these are the four sectors that had the most job openings, quits, separations and hires during the month of March. The weakest sectors for this month are expected to be TTU and IT. The strongest growth rates were in Construction, PBS, LAH, EHS, and Mining and Logging.

The ADP number does not include government workers. seasonally adjusted data from the CES data base could inflate or deflate the headline jobs data. Different data sets. Different sample sizes. Different growth rates. The Employment Situation report forecast article will address these differences. The most important thing to remember is that it is difficult, if not impossible, to be headed into a recession as the number of workers is growing. When the current year data is greater than the trailing year data then we are in an expansion mode and should expect data leaning to the higher end of the low range of data. This means 245,000 is a reasonable expectation depending upon the revisions to the prior data. Remember, we added 275,000 positions last month. (ADP data can be found here.)

This may have been a "one off." It may be the start of something. It may be a pause. It may be a quirk of the seasonally adjusted data that is offsetting the difference between  the February ADP report and the February "Jobs Report." We will know more on Friday.