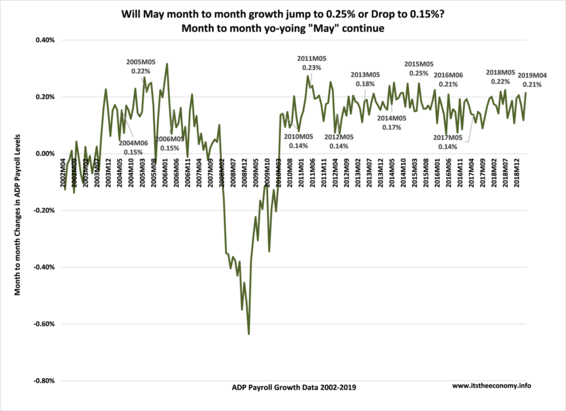 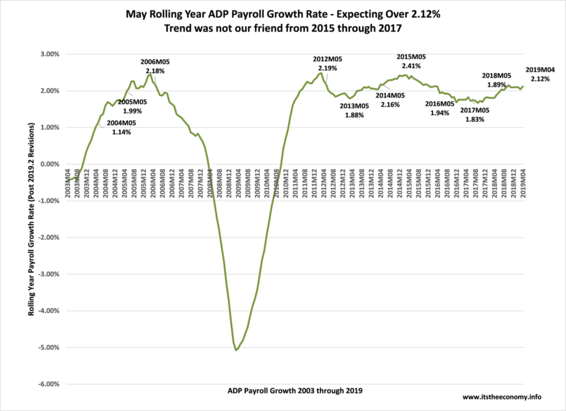 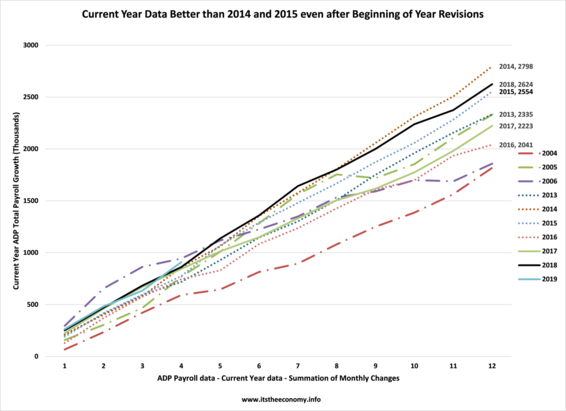 Data Indicates Month to Month Growth in all ADP Sectors

Data also indicates May to May Growth in all ADP Sectors.

The ADP Payroll report is released the Wednesday before the government's Employment Situation Report, or jobs report. ADP is a private company and reports on the private sector payroll numbers. The Jobs Report headline number is the Non-Farm Payroll (NFP) number. The NFP includes both private sector and public sector "jobs." The headline "jobs number is the Current Employment Statistics (CES) worker data. The real jobs data comes from the Current Population Survey (CPS) jobs and unemployment data. This month we are receiving the May Jobs Report. This should not be confused with the April JOLTS Job Opening and Labor Survey data that will be released after the May Jobs Report. What can we expect from the ADP Payroll data this month?

Expect all sectors to grow month to month. The strongest percentage growth should be in Natural Resource (or Mining and Logging,) Professional Business Services (PBS) and Construction. There could be weakness in Financial Services (FIRE,) Trade, Transportation and Utilities (TTU,) Information (IT,) and Education and Health Services (EHS.) Do not be surprised if the seasonally adjusted data shows a contraction in any of these four sectors.

The Rolling Year data indicates that all sectors should grow their payrolls, too.  We should see growth in Natural Resources, Construction, and PBS, as well as Leisure and Hospitality (LAH,) and Education and Health Services (EHS.) Growth in PBS, TTU, and EHS and LAH are expected because these are the four sectors that had the most job openings, quits, separations and hires during the month of March. The weakest sectors for this month are expected to be TTU and IT.

The ADP number does not include government workers. seasonally adjusted data from the CES data base could inflate or deflate the headline jobs data. Different data sets. Different sample sizes. Different growth rates. The Employment Situation report forecast article will address these differences. The most important thing to remember is that it is difficult, if not impossible, to be headed into a recession as the number of workers is growing. When the current year data is greater than the trailing year data then we are in an expansion mode and should expect data leaning to the higher end of the low range of data. This means 245,000 is a reasonable expectation depending upon the revisions to the prior data. Remember, we added 275,000 positions last month. (ADP data can be found here.)