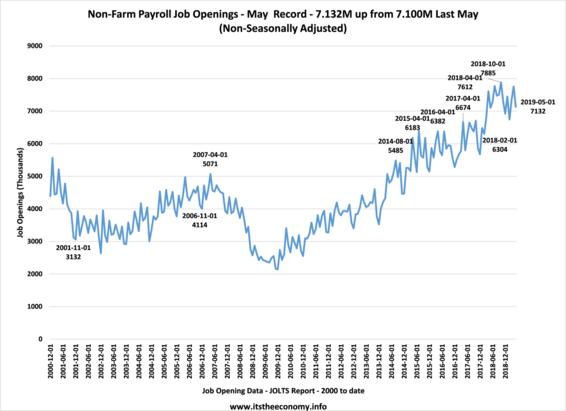 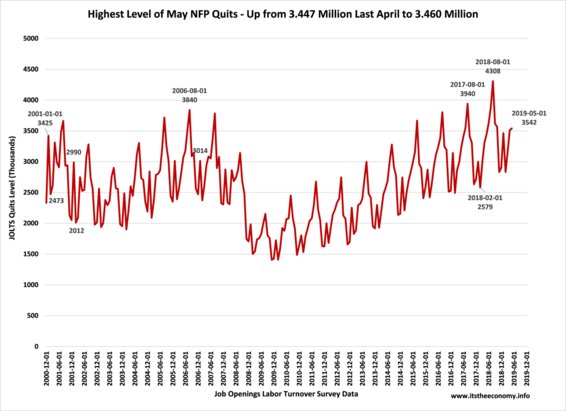 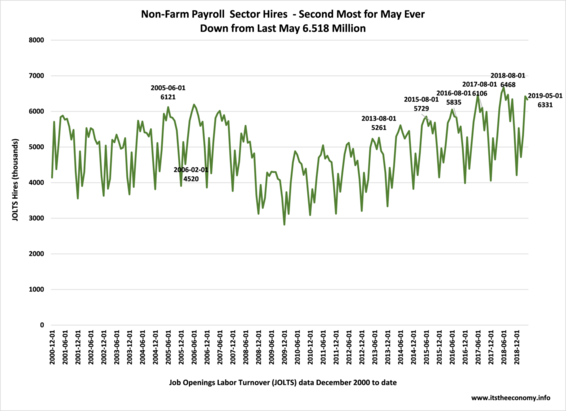 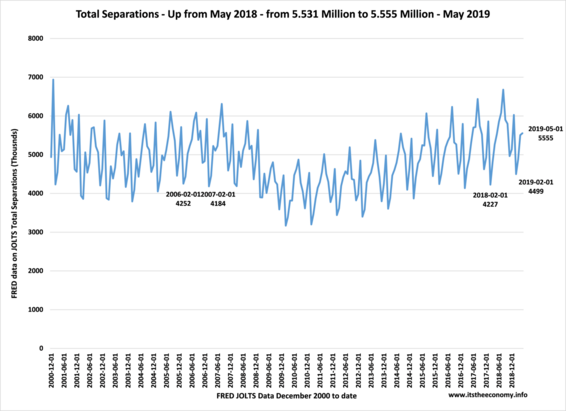 The monthly JOLTS report receives less fanfare than the monthly employment situation report and more attention than the weekly unemployment claims report. There were over 7 million job openings during May. Peak job openings is normally reached during August or October, in preparation for the Christmas Hiring Season. What happened this May regarding openings, hires, separations and quits?

We set a May record for Job Openings with 7.152 million openings. Readers of this column know that we have seen the same four sectors  with the most Job Openings, Hires, Separations, and Quits: Professional Business Services (PBS,) Education and Health Services (EHS,) Trade Transportation and Utilities (TTU,) and Leisure and Hospitality (LAH.) These were the four sectors with the most job openings this May, in that order. There were 1.3 million non-seasonally adjusted job opening in PBS alone, followed by 1.272M in EHS, 1.269M in TTU and 1.102M in LAH.

The Job Openings data and Unemployment Data are unrelated and should not have direct comparisons made. The Employment Situation Report is created using the CPS Jobs and Unemployment Data and the CES Worker and Wages data. The JOLTS data is a third data set. The JOLTS data is comparable to, not identical to, the CES data. There is a fourth data set, the continuing claims unemployment data, which is similar to the CPS U-3 Unemployment data. This is like comparing a Red Apple to a Red Anjou Pear, to a Pomegranate to a Tomato. All are red. All have seeds on the inside. All can be used to make juice drinks. They are not the same. They do not have the same sample sizes, nor do they measure the same things.The real story is not the May Record level of Job Openings, or the seriously low unemployment data for May, it is the mismatch between job opening, Hires, quits, and separations.

We have a mismatch between openings, hires, quits and separations. Here is a summary of the data:

Education and Health Services comes in forth place for most hires, separations and quits, and has the second most openings. Leisure and Hospitality has the fourth most job openings and the most Hires, and the second most quits and separations.  These levels of quits seem to be related to the low wages paid to the TTU, LAH, and EHS sectors. (See "Record May Worker and Wage data.") The level of total workers set a May record even though the month to month seasonally adjusted changes reported a weak month. We may have a mismatch with regard to LAH because of the immigration crisis.

This data still indicates a growing economy. The record level of quits means that workers are confident in finding a better job, or a higher paying job. The job openings data means that employers want to hire more workers. The problem with the JOLTS data s that it does not delineate between full-time and part-time jobs. Next the June JOLTS report may report a dramatic drop in Job Openings due to the big league spike in full-time jobs created and the spike in CES private sector workers recorded this month. This data is more than one month old by the time it is published. It tells us where we were before June's hiring spree. The trend is still moving higher for all four JOLTS categories. Watch this space. We may hit 8 million job openings this Fall.