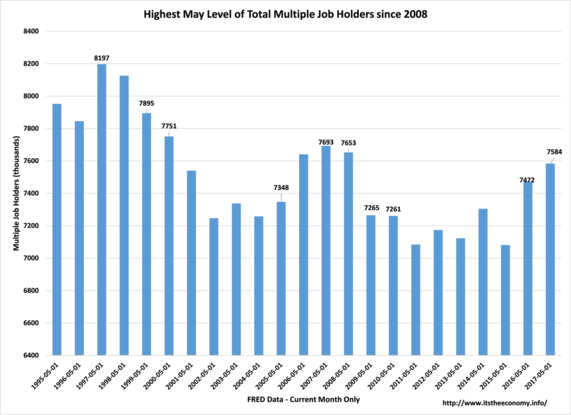 Are Multiple Job Workers Transitioning to One Job?

Last Thursday we saw the release of the monthly ADP Jobs report. This report, seasonally adjusted data and all, showed a strong growth in jobs. Friday we saw the release of the government Jobs Report for May. We added jobs - and workers - just not at the level that ADP said we did. That is where most job report analysis ended.  This is where this column is just getting started.

This column has been comparing job creation and unemployment levels of multiple Presidents at the same point in their Presidencies. The "Five Presidents - Month Four" article detailed how President Trump has added more full-time jobs after four months than Presidents Reagan, Clinton, and George W Bush.  President Obama lost full-time jobs during his first four months in office. President Trump has reduced the number of unemployed workers more than Reagan, Clinton, or Bush 43. Obama oversaw the growth of the number of unemployed after four months in office.  It also details how the participation rate is masking the effective unemployment rate.

The next article addressed the disparity between jobs growth for men versus women since July 2007. "Men have recovered from the Recession (Again)" details how men lost over 10 million full-time jobs during the recession and how it took them until the Summer of 2016 to recover those jobs, before losing them again.  The effective unemployment rate for men is  a whopping 10.83% compared to the U-3 unemployment rate of 4.37% during May 2007 and 4.04% for May 2017. This is the difference a drop in participation from 73.15% to 69.04% will make - masking the true unemployment rate. There is a similar calculation for Women.

All Jobs are not created equal. The job report also provides data on sector data. Some sectors have not returned to May 2017 levels. Some sectors are surging. The article "May Sector Data: Ten Sectors Up over April" digs into the data and finds that five traditionally male dominated sectors are still in recovery mode, including Construction, Mining and Logging, Manufacturing, and Information Technology. The only sector that lost non-seasonally adjusted jobs last month was the Education and Health Service Sector.

Why does this matter? Multiple job workers have been tracked since 1994. Normally we see people working multiple jobs when the market is tight - too many jobs for too few workers. We have a low participation rate, by historic measures. There should be plenty of slack workers. It also matters because the multiple job workers help keep the unemployment levels low - as they relate to the weekly claims data. People who lose one of many jobs is not eligible for "less employed" insurance and are not unemployed. People who move from two part-time jobs to one full-time job are not well captured in the data. We know that full-time jobs increased and part-time jobs decreased during May.  This is fairly normal for May. Will we see more of the same when the June Jobs Report is released?